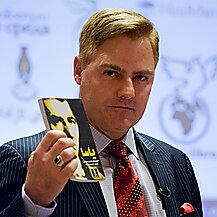 John Allison is the President and CEO of the Cato Institute. Prior to joining Cato, Allison was Chairman and CEO of BB&T Corporation, the 10th largest financial services holding company headquartered in the United States. During his tenure as CEO from 1989 to 2008, BB&T grew from $4.5 billion to $152 billion in assets. He was recognized by the Harvard Business Review as one of the top 100 most successful CEOs in the world over the last decade. Allison has received the Corning Award for Distinguished Leadership, been inducted into the North Carolina Business Hall of Fame, and received the Lifetime Achievement Award from the American Banker. He is a former Distinguished Professor of Practice at Wake Forest University School of Business, and serves on the Board of Visitors at the business schools at Wake Forest, Duke, and UNC-Chapel Hill. Allison is a Phi Beta Kappa graduate of the University of North Carolina at Chapel Hill. He received his master's degree in management from Duke University, and is also a graduate of the Stonier Graduate School of Banking.

B. Kenneth Simon Chair in Constitutional Studies
Director, Center for Constitutional Studies
Roger Pilon is the founder and director of Cato's Center for Constitutional Studies, which has become an important force in the national debate over constitutional interpretation and judicial philosophy. He is the publisher of the Cato Supreme Court Review and is an adjunct professor of government at Georgetown University through The Fund for American Studies. Prior to joining Cato, Pilon held five senior posts in the Reagan administration, including at State and Justice, and was a National Fellow at Stanford's Hoover Institution. In 1989 the Bicentennial Commission presented him with its Benjamin Franklin Award for excellence in writing on the U.S. Constitution. In 2001 Columbia University's School of General Studies awarded him its Alumni Medal of Distinction. Pilon lectures and debates at universities and law schools across the country and testifies often before Congress. Pilon holds a B.A. from Columbia University, an M.A. and a Ph.D. from the University of Chicago, and a J.D. from the George Washington University School of Law.

Louise C. Bennetts is the associate director of financial regulation studies. She focuses on the impact of financial regulatory reform since 2008, including the attempts to address “too big to fail,” the effect of reforms on nonbank financial companies, the Volcker Rule and issues relating bank resolution and insolvency. Prior to joining Cato, she was a senior associate in the New York office of Davis Polk and Wardwell where she advised both banking and commercial clients on a wide range of corporate transactions, including leveraged lending, M&A transactions and bankruptcy-related advice. Most recently, her practice focused on bank regulation, in particular advising financial market participants on the impact of the Dodd-Frank Act and its implementation. Bennetts holds a first class honors degree in Economics and an LLB (cum laude) from the University of Cape Town, an MA from the University of the Witwatersrand and is a member of the New York Bar.

David Boaz is the executive vice president of the Cato Institute and has played a key role in the development of the Cato Institute and the libertarian movement. He is a provocative commentator and a leading authority on domestic issues such as education choice, drug legalization, the growth of government, and the rise of libertarianism. Boaz is the former editor of New Guard magazine and was executive director of the Council for a Competitive Economy prior to joining Cato in 1981. He is the author of Libertarianism: A Primer, described by the Los Angeles Times as “a well-researched manifesto of libertarian ideas,” the editor of The Libertarian Reader, and coeditor of the Cato Handbook For Policymakers. His latest book is The Politics of Freedom.

Brian Doherty is a senior editor at Reason magazine and Reason.com.

Doherty is author of the books This is Burning Man (2004, Little, Brown; paperback BenBella, 2006), Radicals for Capitalism: A History of the Modern American Libertarian Movement (PublicAffairs, 2007), Gun Control on Trial (Cato, 2008), and Ron Paul's Revolution: The Man and the Movement He Inspired (HarperCollins/Broadside, 2012).

From 1994 to 2003, Doherty worked as associate editor and reporter for Reason, writing a variety of stories on topics ranging from the Americans with Disabilities Act to pollution-credit trading to the independent rock scene.

He has been a commentator on hundreds of radio and TV shows, including Fox News Channel's The O'Reilly Factor and Glenn Beck Show. Doherty was the Warren Brookes Fellow in Environmental Journalism at the Competitive Enterprise Institute in 1999 and served as managing editor at Regulation magazine from 1993-94.

Doherty received a bachelor's degree in journalism from the University of Florida. He lives in Los Angeles.

Gabriela Calderon de Burgos is a Research Associate at the Cato Institute’s Center for Global Liberty and Prosperity and editor of Elcato.org, the Cato Institute’s Spanish-language website. Since 2006, she has been a regular columnist at El Universo of Ecuador. She was a research intern at The Cato Institute in the summer of 2004, and completed the Institute’s policy training program of seminars and workshops on research, writing and public speaking. Calderon de Burgos graduated in 2004 with a B.A. in International Relations from York College in Pennsylvania, and in 2007 with a Master’s degree in International Commerce and Policy from George Mason University.

Erik Gartzke is an associate professor of political science at the University of California, San Diego. He studies institutional correlates to war and peace, with an emphasis on bargaining and rational choice theory. He has contributed prolifically to his discipline, notably in the Journal of Conflict Resolution, the American Journal of Political Science, and International Studies Quarterly, among many others.