The White House released another immigration framework Thursday. Like its past efforts, this plan calls on Congress to enact draconian restrictions on legal immigrants. Members of Congress will have to flesh out the details, but in the most likely scenario, the new plan would cut the number of legal immigrants by up to 44 percent or half a million immigrants annually—the largest policy-driven legal immigration cut since the 1920s. Compared to current law, it would exclude nearly 22 million people from the opportunity to immigrate legally to the United States over the next five decades.

The language in the framework is vague enough that members of Congress have some flexibility in its implementation. The most vocal supporters of the new plan in Congress are Senators Tom Cotton (R-AR), David Perdue (R-GA), James Lankford (R-OK), Thom Tillis (R-NC), and Charles Grassley (R-IA). This group has previously introduced the SECURE Act (S. 2192), legislation that would make many similar changes to legal immigration as those called for by the White House. This analysis will take the SECURE Act as the initial blueprint for a bill implementing the White House ideas.

The president’s new plan adds two major elements that distinguish it from the senators’ current bill. First, it would immediately end the diversity visa lottery and, before eliminating its 55,000 visas completely, reallocate them toward reducing the current family- and employer-sponsored backlogs. Second, it would end—like the SECURE Act—most family-sponsored visa categories, but the White House would apply the changes only “prospectively, not retroactively, by processing the backlog.” This means that the number of legal immigrants would drop more gradually than under the senators’ current bill.

Table 1 provides the fully implemented changes. The White House plan—enacted as an amended and narrowed version of the SECURE Act—would reduce the number of legal immigrants by more than 490,000 people annually, or 44 percent. The final column shows the estimated timing for the entire category to have fully phased out. (See below for a full explanation of these estimates.)

Sources: Authors’ calculations based on White House; S. 2192; Department of Homeland Security (FY 2018 based on FY 2016 figures, accounting for the FY 2018 cut to refugees); *Category would continue but under the SECURE Act, no visas would likely be issued (see text); **Plan provides for a temporary increase

The White House plan would end the categories for parents and siblings of U.S. citizens as well as those for adult children of citizens and legal permanent residents. Based on the SECURE Act, the “minor child” category would be limited to those under the age of 18, rather than 21. The White House framework calls on Congress to end “loopholes exploited by smugglers”—language that the GOP has used to refer to a bill to restrict asylum, elements of which are included in the SECURE Act.

While spouses and minor children of residents are theoretically preserved under both the SECURE Act and the White House plan, the SECURE Act reduces their allotment by the number of parolees—foreigners granted temporary admission for humanitarian or public interest reasons—who stay in the United States for more than a year. Because the number of parolees appears to be greater than the allotment, this category would likely never issue any green cards in practice. The other White House-endorsed bills that cut legal immigration included this formula on parolees, but if legislators do not include it, then spouses and children of permanent residents could continue to access the category. Without knowing what provision would take its place, however, we cannot estimate an alternative scenario.

The effects of the White House immigration framework are similar only to two notorious pieces of legislation: the Emergency Quota Act of 1921 and the Immigration Act of 1924, which reduced the number of legal immigrants by 495,672 and 412,582, respectively. Congress saw these bills as preventing the degradation of America’s racial stock—by Italians and Eastern Europeans, specifically Jews.

The State Department records 3.7 million applicants waiting abroad in the categories that the SECURE Act would eliminate, and Department of Homeland Security figures indicate that between 6 and 9 percent of family-sponsored immigrants, depending on the category, adjust to permanent residency inside the United States. This would imply another quarter of a million applicants waiting inside the United States (presumably in temporary statuses).

Adding half of the 55,000 green cards from the diversity visa lottery to the combined quota for the eliminated family-sponsored categories would allow 165,566 green cards to be issued annually to those in the backlog. Simple division would lead to a full implementation date of the White House plan 24 years from today.

But this is not the most likely method of implementation. Under current law, each category has a separate annual quota, and within the categories, each nationality has a quota of no more than 7 percent of the total number in that category. For example, the sibling category quota is 65,000, and Mexicans can use no more than 4,550. This means that if the senators leave all other aspects of current law the same, the categories will expire at radically different times for each nationality. For several reasons, the senators are more likely to adopt this staged implementation.

First, it delays or prevents the entry of the greatest number of legal immigrants, which is the bill’s goal. Second, the framework states that the changes would apply “prospectively, not retroactively,” implying that the legislation would allow the current system to continue without any changes. Finally, the SECURE Act already allows the categories to continue unchanged for a single year, so the simplest amendment would be to replace “for one year” with something like “until all current beneficiaries receive visas.” Similarly, the easiest and most restrictive way to implement the diversity visa reallocation would be to distribute them equally among the four eliminated categories.

White House advisor Stephen Miller in his press call explaining the framework indicated that both the employer-sponsored and family-sponsored diversity reallocation was temporary and could be accessed only by green card applicants in line as of 2018. Only employer-sponsored applicants from India would be taking advantage of this increase by 2029 or 2039. While some family-sponsored Mexican applicants would be technically still eligible more than 100 years from now, this analysis assumes 2069 as the date of final implementation (i.e., the date when all applicants who have yet to immigrate are likely to be dead).

As Table 1 shows, 61 percent of the cuts would occur immediately and 71 percent within a decade. From 2019 through 2028, nearly twice as many immigrants—3.6 million—would be banned as would potentially receive residency through the Dreamer legalization—at most 1.8 million—under the White House plan. By the end of the second decade, the number of banned immigrants would rise to 7.6 million. By final implementation, the White House plan would exclude almost 22 million legal immigrants. 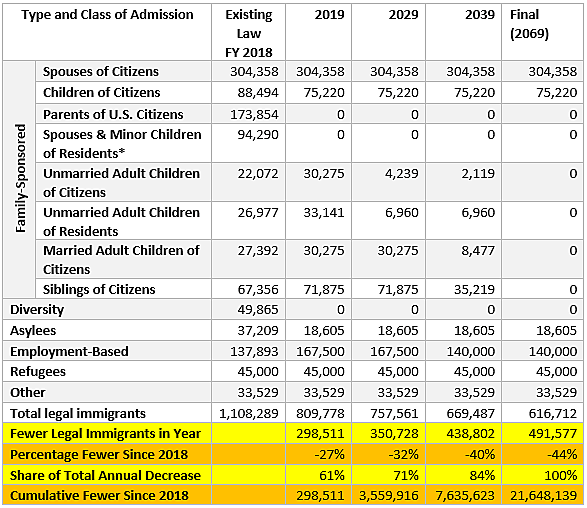 Sources: See Table 1; *Category would continue but under the SECURE Act, no visas would likely be issued (see text)

Figure 1 provides the phase-out schedule for the four eliminated family-sponsored preference categories that have a backlog. The implementation occurs in large jumps as the backlog for nationalities that are not at their per-country limits disappears all at once. The more gradual drops happen as the backlogs for individual nationalities are eliminated. 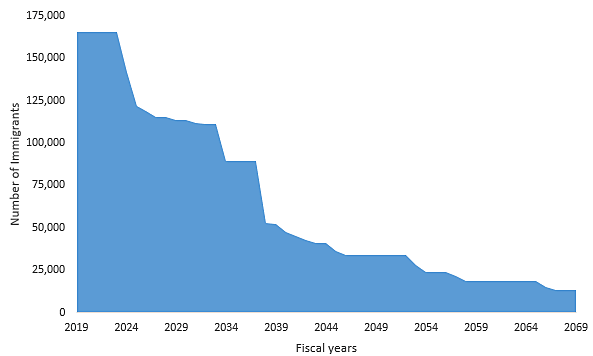 As Figure 1 shows, even in 2069, some legal immigrants are still scheduled to receive green cards. These immigrants are entirely from Mexico and the Philippines. Therefore, assuming 2069 as the final implementation date implies that up to 706,665 family-sponsored Mexican and Filipino applicants would die or make alternative plans before they received their green cards under this plan as well as under current law.

This does not mean most people in the current family-sponsored categories typically wait this long to immigrate. Instead, it reflects the impact exerted by the per-country limit in some of the categories, particularly affecting Mexicans and Filipinos in particular. Modifying the per-country limit and increasing quotas in the categories would shorten the family wait times under current law or in the backlog reduction plan.

Restricting legal immigration will unnecessarily deny opportunity to many people and have far-reaching negative consequences for economic growth in the United States. Labor force growth is one of the most important growth factors. Cutting the number of new legal immigrants by about 50% would initially reduce the rate of economic growth in the United States by an estimated 12.5% from its projected level, according to Joel Prakken, senior managing director and co-founder of Macroeconomic Advisers. This penalty would increase in later years as America becomes even more dependent upon immigrants for the country’s labor force growth due to our aging population.

The National Academy of Sciences has estimated that the average immigrant contributes, in net present value terms, at least $92,000 more in taxes than they receive in benefits over their lifetime, so banning them would harm government finances. Diversity and family-sponsored immigrants—who the White House framework would ban—are better educated than the average immigrant (and Americans), so the effects of the White House ban could be even more negative.

The United States needs legal immigrants to maintain a strong rate of current economic growth and stay competitive internationally. America already has an immigration level as a share of its population near the bottom of OECD countries. Real “merit-based” immigration reform would focus on increasing the number of immigrants at both ends of the skill spectrum to fill difficult manual labor jobs as well as contribute to technology, science, and finance. The White House proposal is the opposite of the reforms that would lead America toward prosperity.