The 2016 GOP platform states that:

“In light of the alarming levels of unemployment and underemployment in this country, it is indefensible to continue offering lawful permanent residence to more than one million foreign nationals every year.”

The GOP platform statement assumes that those on green cards take jobs from Americans, an assumption that is incorrect (see here, here, and here for more information).

What’s actually indefensible about our green card system is how few of them come here for work purposes.  First, legal immigrant inflows to the U.S. as a percent of our population are small compared to other developed countries (Figure 1).  The only countries with fewer immigrant inflows as a percent of their populations are Portugal, Korea, Mexico, and Japan.  The United States does allow more immigration as an absolute number than any other country but we also have a very large population, making these annual flow figures seem small.

Immigrant Inflows as a Percent of Population, 2013

These relatively small immigrant flows have only produced an immigrant percentage of our population that is midrange among the OECD countries (Figure 2).  New Zealand has the highest at 28.4 percent of their population while Mexico has the lowest at 0.84 percent of theirs.  The United States is in the middle at 13 percent.  Our legal immigration system is so restrictive that without unauthorized immigrants the U.S. population of the foreign-born would only be about 9.5 percent of our population – a 28 percent reduction in present numbers.

Immigrant Stock as a Percent of the Population, 2013 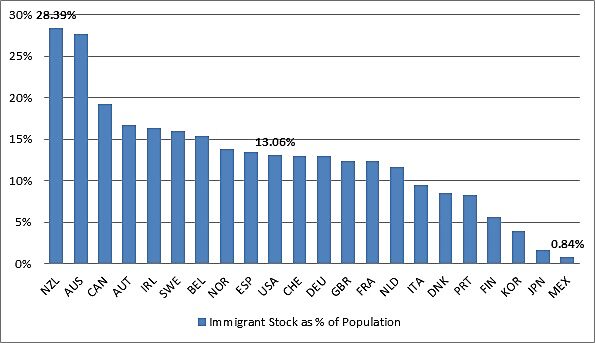 Green card workers admitted as a percentage of the total annual immigrant inflow are far lower here than in other countries (Figure 3).  Only about 7.7 percent of all green cards annually issued by the U.S. government are for workers – virtually all of them high skilled.  The employment-based green card system allowed about 140,000 green cards to be issued annually but that number also includes the family members of those workers.  In 2014, 56 percent of green cards set aside for skilled workers actually went to family while 44 percent were for the workers themselves.  The GOP platform wants to decrease this already small number of green cards for skilled workers even further.

Immigrant Workers as a Percent of All Immigrants, 2013 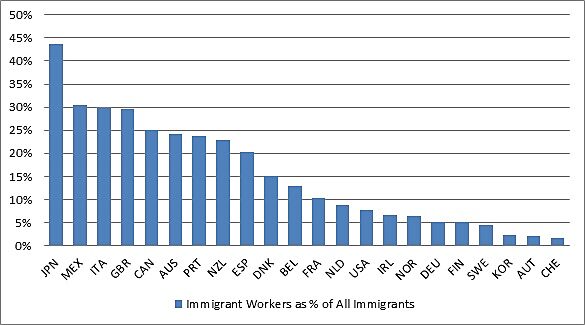 To put the silliness of the GOP platform into further context, the 2013 inflow of green cards for workers was equal to 0.04 percent of all native-born workers (Figure 4).  In Australia, the annual inflow of immigrant workers as a percent of native Aussie workers is 12 times as great.  In 2013, native labor force participation rates in Australia were 6.6 percentage points higher than in the United States according to the OECD.  Do you still think immigrant workers cause unemployment?

Annual Flow of Immigrant Workers as a Percent of All Native Workers, 2013 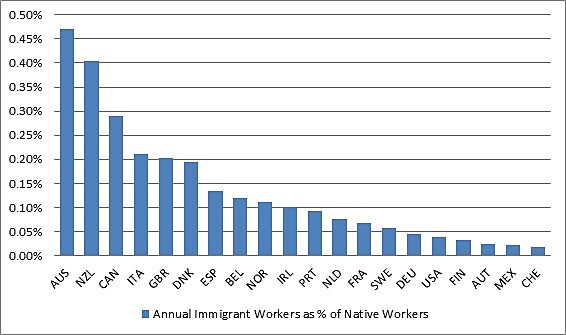 Immigrants issued green cards for working purposes are not the only immigrants who work, of course.  Most immigrants in the United States arrive as relatives of Americans or other immigrants, more than in any other country (Figure 5).  However, about half of those family immigrants work even though they didn’t receive and employment-based green card.

Immigrant Family Members as a Percent of All Immigrants, 2013 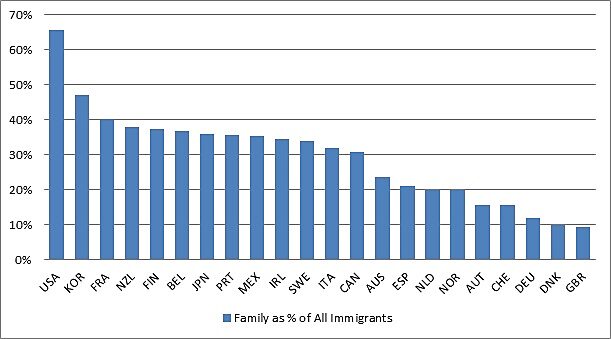 Australia, New Zealand, Canada and most of the other countries with more open immigration policies emphasize skilled immigration.  The current U.S. green card system also emphasizes skilled immigration among the workers it lets in but by setting aside most green cards for families, our system ends up skewing them toward lower-skilled workers related to Americans.  Ultimately, the United States should liberalize the immigrationoorf both lower and higher-skilled foreign workers.  The GOP platform wants to go in the opposite direction, further shrinking the already paltry quantity of skilled immigrant workers allowed in.

Immigration is not like a budget that must eventually be balanced.  The United States government can allow in more skilled immigrant workers, more family-based immigrants, and more lower-skilled foreigners – no numerical offsets are required.   The number of immigrants allowed in annually, roughly one million, is neither set by legislation nor is it determined by the laws of economics as the complex legal quota system has naturally settled at an equilibrium of about that number.  Liberalizing high skilled worker immigration has the most political support and will have the greatest impact, per immigrant, for the U.S. economy.  That seems like an easy place to start.