Which State Will Expand School Choice Next?

With over 150,000 participating students in 12 states, scholarship tax credit (STC) programs constitute the largest and most popular form of private school choice. STC programs have expanded rapidly in recent years with six states adopting them since 2011, including Alabama this year. So which state will be next? After yesterday's disappointing defeat in South Carolina, the answer may lie on the opposite side of the continent.

Earlier this week, Rep. Liz Pike introduced an STC bill to the Washington state legislature. The bill would provide tax credits to corporations donating to state-approved scholarship organizations that fund children from low-income families and children with disabilities attending the schools of their choice.

Like the STC program that New Hampshire enacted last year, the WA legislation follows the best practices from STC programs around the nation and avoids the flaws of the recent bills in Virginia and Alabama. Washington's proposed STC program would be capped at $100 million in the first year and includes an "escalator" so that the program will grow over time to meet demand and it eschews unnecessary new regulations. The $5,000 cap on scholarships is high enough to benefit low-income families but low enough that the state still has the potential to save money, as shown in this chart from the Freedom Foundation comparing the maximum scholarship size to Washington state's total public school spending per pupil: 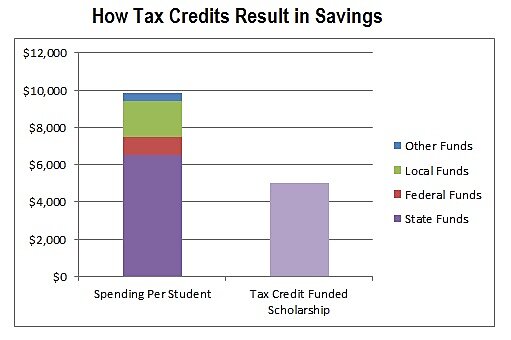 The bill could go farther still by expanding the use of the scholarships to include educational expenses beyond just private school tuition. For example, under New Hampshire's STC program, scholarships can cover expenses such as tutoring, textbooks, homeschool curricula, and online learning. Adding a similar provision would move the bill from school choice to educational choice, which would foster greater customization and innovation in the delivery of education.

But even without such provisions, school choice programs have been proven effective at improving student outcomes and adopting one would be a great leap forward for Washington's education system.