If the governor signs the legislation into law, which appears likely, Alabama will be the 12th state to enact an STC program. Last year, New Hampshire and Virginia enacted similar programs.


While Democrats have legitimate complaints about the manner in which the legislation was adopted, it is likely that once the program takes effect it will garner the bipartisan support that STC programs have found in other states. 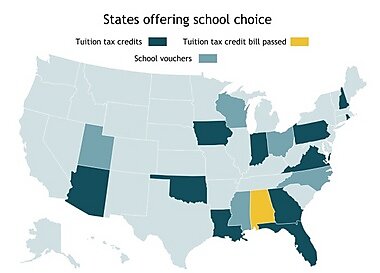 
Alabama’s proposed STC program is much more constrained than other STC programs. It will be the only STC program yet enacted that is limited entirely to students in failing government schools. While a good start, students in non‐​failing schools would also benefit from more educational options. No school can best meet the needs of every single child who happens to live nearby.


Along with Indiana and Oklahoma, Alabama’s 50% credits will be the lowest in the nation. Arizona, Florida, and Pennsylvania grant 100% credits, while tax credits in other states range from 65% to 90%. Higher credit percentages create a greater incentive for individuals and corporations to donate, allowing the STC program to reach more students.


Unlike most other states, Alabama’s STC program mandates that participating schools administer standardized tests, which could exacerbate the “teach to the test” problem. These unnecessary testing provisions are intended to quell concerns about accountability, but the most effective form of accountability is the chosen schools’ direct relationship with parents who can choose to leave if their kids’ needs are not met.


Still, despite its limitations, Alabama’s STC program will expand educational options for those most in need. Evidence from Florida and elsewhere suggests that Alabama’s STC program is likely to raise the academic performance of both participants and nearby public school students. And it can do all this while saving the state money.