State and Local Budgets Are Not in Crisis

Congress has provided $2.6 trillion in spending and tax relief in response to the pandemic and economic crisis. As government spending has started to decline, the economy is recovering strongly with GDP rising and business startups soaring.

Nonetheless, the political impulse to spend seems insatiable, and Congress is crafting another huge aid package that will put us further into debt. Policymakers are considering providing further aid for state and local governments, no doubt prompted by off‐​base stories such as this one suggesting that states are in dire fiscal straits.

Bureau of Economic Analysis data (Table 3.3) show that state and local tax revenues are rising nationwide, not falling. Sales tax revenues dipped in the second quarter of 2020 but bounced back in the third quarter. Individual income and property taxes did not fall—they rose in both the second and third quarters. Some places such as New York City are in trouble from self‐​inflicted wounds, but there is no nationwide government budget crisis.

Tax revenues are likely to continue rising as the economy recovers. Nationwide home prices are currently up more than 6 percent over last year, suggesting that local government budgets are solid given that property taxes account for 70 percent of local tax revenues.

There is no need for more federal aid to the states. 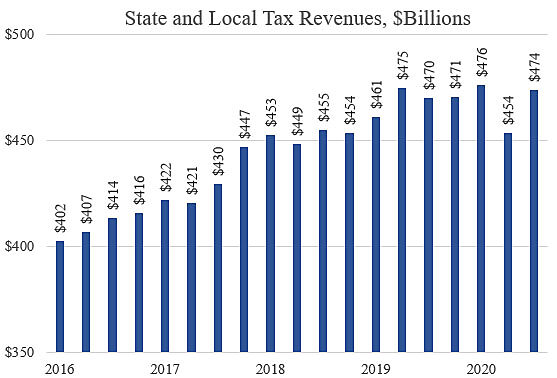