With the health crisis and recession, many restaurants and other businesses have been hit hard. Some businesses, such as online retailers, have done well. Overall, the nation’s gross domestic product plunged in the second quarter of 2020 but bounced back strongly in the third quarter.

The rate at which Americans are launching new businesses provides another gauge of economic health. In the recession a decade ago, the number of startup businesses fell substantially and never fully recovered. Indeed, the U.S. startup rate has trended down since the 1970s, which is a concern because new businesses are a major source of jobs, innovation, and competition.

The chart shows that there were about 860,000 total applications per quarter in recent years, of which about 325,000 were high propensity. High‐​propensity applications dipped in the first and second quarters of 2020 as the economy went into recession.

As startups were falling, business shutdowns were rising. We don’t have accurate, up‐​to‐​date data on permanent shutdowns, but various indicators suggest they have risen in 2020. We know that shutdowns rose during the last recession and that some cities and industries have been hit hard this time. A third or so of New York City restaurants may close permanently.

The good news is that we appear to have had a big turnaround in startups. The chart shows that high‐​propensity applications soared to 537,000 in the third quarter. Apparently, Americans are opening or planning to open large numbers of startups. According to the Census data, applications for online retailers have gone through the roof. 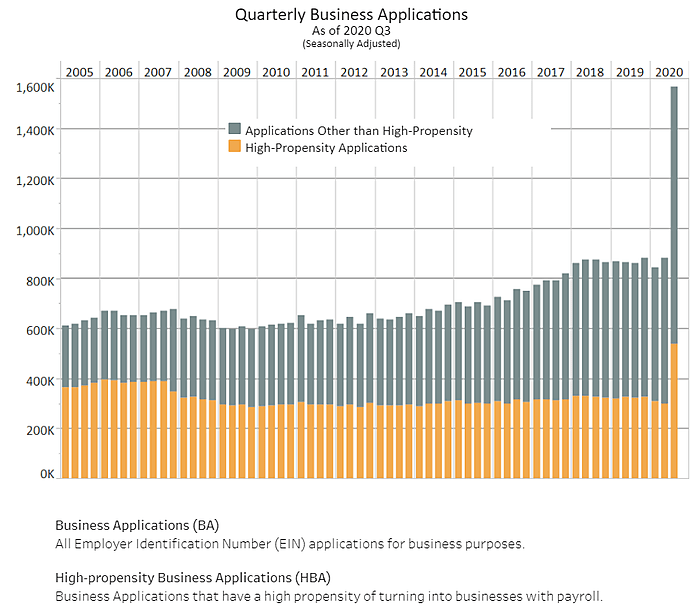 The apparent upward spike in entrepreneurship is impressive, as we did not see such a jump during or after the recession a decade ago. As one of the experts behind the Census data, John Haltiwanger, noted, “One of the reasons we took so long to recover from the Great Recession is startups got clobbered and didn’t come back.” A Wall Street Journal news piece concurred, “The sluggish pace of new‐​business creation in years after the [great] recession officially ended contributed to a slow recovery and unusually high unemployment.”

A share of the third quarter’s startup boom likely represents “entrepreneurship by necessity,” or people thrown out of jobs scrambling to find new sources of income. Others are likely seeing opportunities created by the health crisis, such as mask manufacturing. As one reporter noted, “because of the huge changes in economic behavior brought on by the pandemic, a lot of people have ideas for new businesses.”

Will the startup boom last? We’re now in another cycle of rising virus counts and mandated shutdowns. Also, the incoming Biden administration has proposed a range of anti‐​market policies that threaten to undermine businesses and startups. Weekly data show that business applications are now down from the peak in August.

Nonetheless, the Census data provide hope that entrepreneurs are coming to the rescue of our battered economy. They are reallocating resources from declining activities to new areas of opportunity. They are helping the economy adapt and begin to grow once again. Let’s work to convince Biden and his team not to throw an interventionist wrench into the works.