The Wall Street Journal published a news story last week suggesting that public schools face ruin without more federal aid. The story had the hardcopy title, “Schools Warn of Severe Budget Shortfalls,” and the first paragraph said, “academic officials are warning that vast budget shortfalls will further strain their districts unless Democrats and Republicans break their impasse on a new coronavirus‐​relief package.”

The WSJ article was essentially an advocacy piece for greater federal intrusion on an activity that is the responsibility of the states. It lacked hard evidence, but there is some solid data we can now look at on state‐​local budgets during the crisis.

The BEA released data on state‐​local finances last week (Table 3.3). The chart below shows seasonally adjusted first and second quarter revenues for state‐​local governments, thus it roughly shows revenues before the recession (January‐​March) and during the recession (April‐​June). The BEA publishes its data annualized, so I divided the numbers by four.

State‐​local governments are not short of money in general, although some particular jurisdictions may be hard hit. Federal aid has risen far more than tax revenues have fallen. State‐​local budgeting will be tougher in coming months than during the boom years, but the narrative that state‐​local services such as schools will collapse without more bailouts is false.

More on these themes here, here, and here. Note that the WSJ editorial board here has a different view of state budgets than the WSJ news pages. 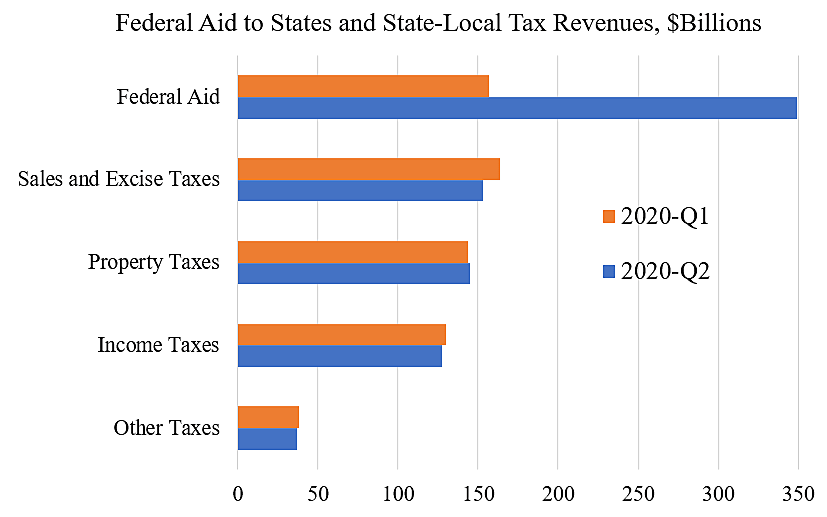