An anonymous source sent an advanced copy of S.1757, otherwise known as the “Building America’s Trust Act,” to Ars Technica. If passed as written, the bill would dramatically expanded surveillance at the border and ports of entry, putting the privacy of immigrants and citizens alike at risk.

The bill, sponsored by Sen. John Cornyn (R-TX) and co‐​sponsored by six of his Republican colleagues, mandates increased border drone surveillance and the collection of more biometric information, including but not limited to voice prints and facial scans.

The drone provisions of the bill are consistent with President Trump’s campaign rhetoric. During his campaign, he said drones should patrol the border 24/7. Cornyn’s bill doesn’t quite go that far, requiring Customs and Border Protection (CBP) to fly drones at least 24/5. 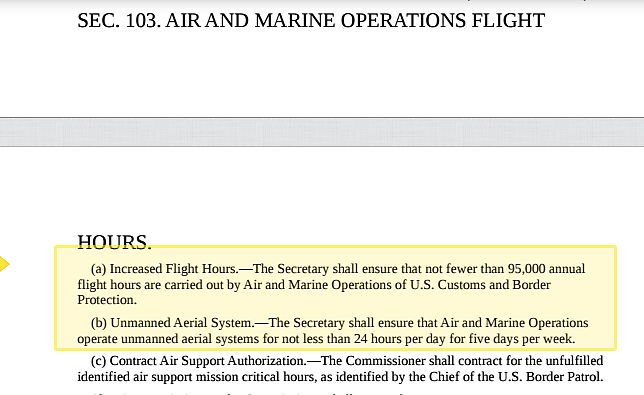 Drone surveillance at the border isn’t new, nor is it effective. In 2014 the Department of Homeland Security’s Office of Inspector General (OIG) released a report on CBP’s drone operations. It found that the drone program, which includes Predator B drones originally designed for military use, did not achieve expected results and contributed to very few apprehensions of illegal border crossers and marijuana. The report also found that the drone program cost $12,255 per flight hour. In FY2013, CBP’s drones flew for 5,102 hours for a combined cost of around $62.5 million.

This was a large expense for an inefficient border security tool. Aside from the fiscal costs, the increased use of drones on the border will worsen the militarization of the border, with American citizens being under the ever‐​snooping eye of border patrol surveillance equipment. In 2013, Americans on the border were already regularly seeing military‐​grade surveillance tools in the air. From a 2013 New York Times report:

The United States‐​Mexico border has become a war zone. It is also a transfer station for sophisticated American military technology and weapons. As our country’s foreign wars have begun to wind down, defense contractors look here, on the southern border, to make money.

Lately it has become entirely normal to look up into the Arizona sky and to see Blackhawk helicopters and fixed‐​wing jets flying by. On a clear day, you can sometimes hear Predator B drones buzzing over the Sonoran border. These drones are equipped with the same kind of “man‐​hunting” Vehicle and Dismount Exploitation Radar (Vader) that flew over the Dashti Margo desert region in Afghanistan.

CBP drones do not have to be large, military‐​grade predator drones. Earlier this year I noted that The Department of Homeland Security (DHS), CBP’s parent agency, is interested in small, portable drones outfitted with facial recognition technology.

Facial recognition is also mentioned in S.1757 as part of the bill’s passport screening section, requiring that CBP “utilize facial recognition technology or other biometric technology” to “inspect travelers at United States airports of entry.”

DHS stated earlier this year in a privacy impact assessment concerning facial recognition, “the only way for an individual to ensure he or she is not subject to collection of biometric information when traveling internationally is to refrain from traveling.” There are already facial recognition trials at airports in six American cities, but the technology will become more prevalent if S.1757 is passed.

Unlike other biometrics such as fingerprints and DNA, facial images can be obtained from individuals who haven’t come into contact with the criminal justice system, the primary source of most biometrics. About half of American adults are already in a facial recognition network thanks to these networks’ access to DMV and passport data. If American citizens’ passport and driver’s license facial images are going to be included in airport facial recognition systems there should be strict limits on sharing these images with other law enforcement agencies and how long facial scans are stored. Although CBP states that facial scans at airports are deleted after 14 days that commitment is policy, not law, and could change.

S.1757 mandates that a biometric exit program will be implemented in America’s 15 busiest airports, seaports, and land ports of entry within two years of enactment. One section of S.1757 requires DHS to upgrade or build a biometric system that enables DHS to store alien iris scans and voice prints that federal, state, and local law enforcement can access. 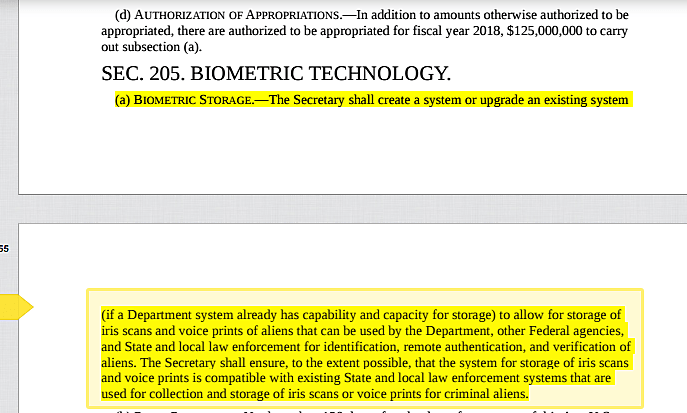 As if the surveillance technology outlined in S.1757 wasn’t concerning enough, the legislation also includes an increase in the number of border patrol agents (at least 26,370 from around 20,000) and more federal judges in southern border states. Under the Border Patrol Strategic Plan included in S.1757 DHS will consider using military technology.

More drones and biometric technology tools on the border and at ports of entry should concern anyone who values privacy. CBP has statutory authority to stop vehicles within 100 miles of the border, so even those people who don’t live near the border risk being exposed to CBP surveillance tools. In addition, the policies outlined in S.1757 will require DHS to collect more information about American citizens and foreigners alike, information that could be used for reasons other than border security.