During his campaign, President Trump said that he wanted drones to patrol the border 24/7. Customs and Border Protection (CBP), a Department of Homeland Security (DHS) agency, has used drones originally designed for foreign battlefields in order to conduct border surveillance, although these efforts have hardly been efficient. Federal solicitation documents reveal that DHS is looking to smaller drones with facial recognition capabilities. This ought to concern Americans who value civil liberties.

Before unpacking why plans for CBP facial recognition drones are disquieting, it’s worth outlining what kind of capabilities DHS is looking for.

The solicitation notice states the following:

This OTS [Other Transaction Solicitation] call seeks novel sUAS [small unmanned aerial system] capabilities and technologies to augment CBP and USBP [U.S. Border Patrol] mission capabilities. In particular, DHS is interested in technologies and solutions that support USBP agent activities, including enhanced overall situational awareness or support during distinct events, such as detection, tracking, interdiction, and apprehension, and search and rescue (SAR) operations. USBP agents operate day and night in diverse and extreme environments across thousands of miles of the nation’s international land borders and coastal waters. Agents must patrol remote areas, often with significantly limited mobility, visibility and communications. Additionally, agents are often required to traverse rough terrain on foot while carrying large amounts of equipment and, with limited intelligence and support, resolve encounters with unknown and potentially hostile actors. DHS seeks sUAS solutions that can augment USBP capabilities in such conditions.

Because of the “very positive/​robust response” to this solicitation, DHS is closing the OTS call early, with an April 27th deadline now in place.

The solicitation lists required sensor capabilities for the drones, including, “Provides a surveillance range of 3 miles (objective),” “Able to track multiple targets persistently,” and “Identification of humans via facial recognition or other biometric at range.”

Later on, the same document notes:

the sensor technology would have facial recognition capabilities that allow it cross‐​reference any persons identified with relevant law enforcement databases. The data gathered via the sensors would provide information to USBP agents including the presence and extent of potential threats and support the ability of the agent to determine an appropriate response.

If you’re an American adult reading this there is a good chance that your facial image is in one of these “relevant law enforcement databases.” A 2016 report published by Georgetown Law’s Center on Privacy and Technology revealed: “One in two American adults is in a law enforcement face recognition network.” A Government Accountability Office report from last year found that the Federal Bureau of Investigation’s facial recognition system has access to more than 411 million facial images, including the driver’s license photos from sixteen states.

When considering CBP’s activities we shouldn’t only be thinking about America’s land borders. Current law allows CBP officials to stop and search vehicles within 100 miles of America’s external boundary in order to prevent illegal immigration. Roughly two‐​thirds of Americans live in this so‐​called “Constitution‐​free” zone. Although DHS’ solicitation mentions facial recognition drones being used as part of border patrol we should be prepared for them to make appearances at interior checkpoints as well as at ports of entry. 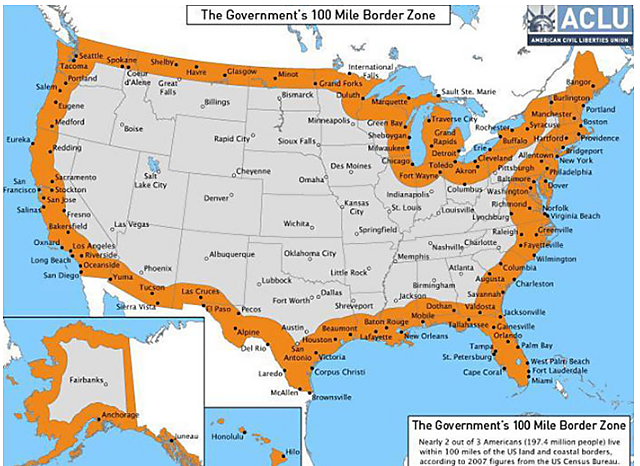 CBP and other federal law enforcement agencies using facial recognition tools should only be able to access facial images related to wanted persons and those with a history of violent crime. Allowing police to identify law‐​abiding citizens going about their day or participating in a First Amendment‐​protected activity, such as a protest, could have a disturbing chilling effect on members of the public (as Georgetown researchers noted). Because the Supreme Court has yet to rule on whether law enforcement officials using facial recognition technology are conducting Fourth Amendment searches it’s up to federal agencies to implement such policies of their own accord.