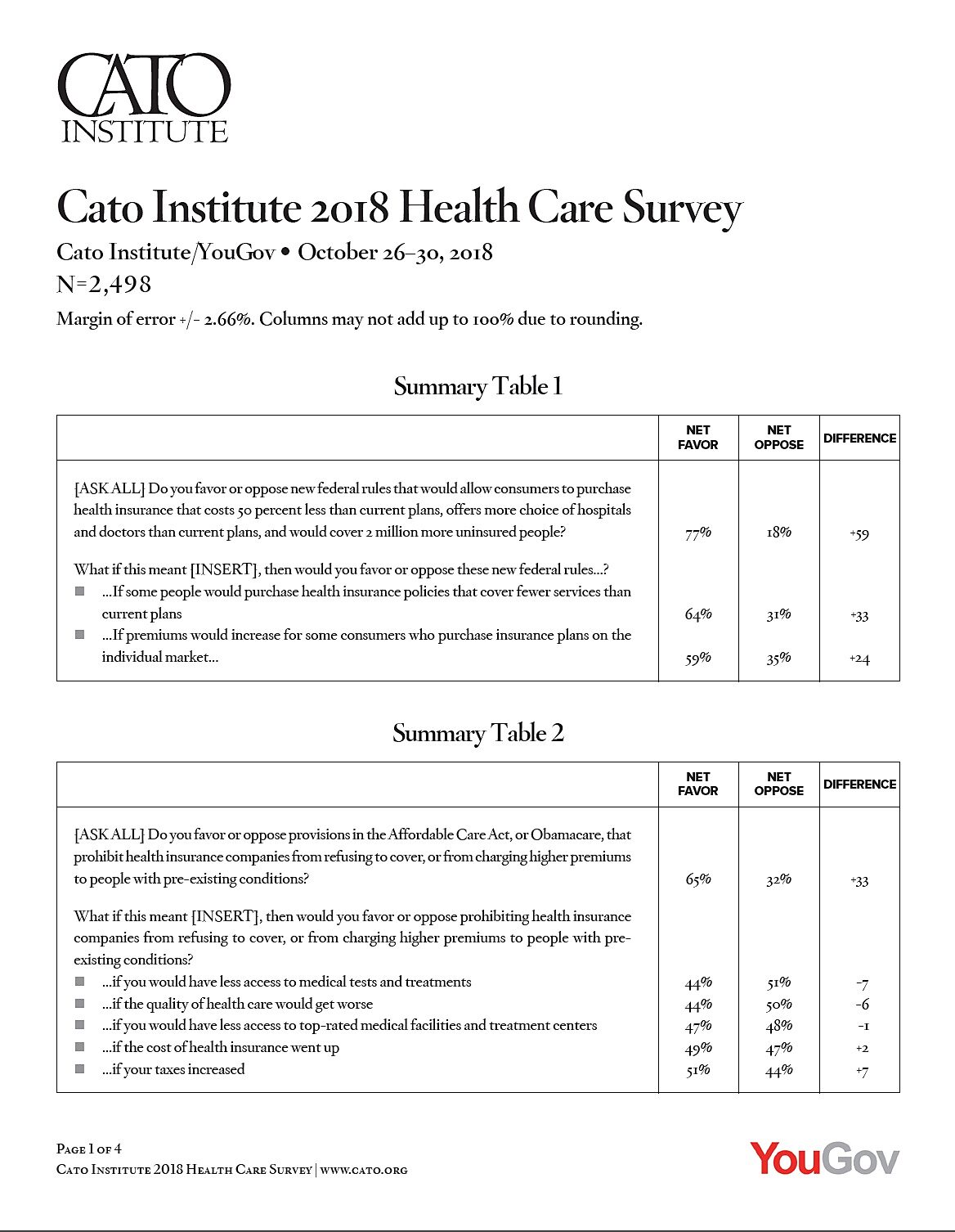 Days before the 2018 midterms, 68% of voters say that health care is very or extremely important to how they plan to vote in this year’s elections, according to a new Cato 2018 Health Care Survey of 2,498 Americans. These numbers are driven primarily by Democratic voters with 86% who say this issue is especially important to them—in fact, 56% say the issue is “extremely important” to them. Independent (33%) and Republican voters (21%) are far less likely to say this is an “extremely” crucial issue for their vote this Tuesday. 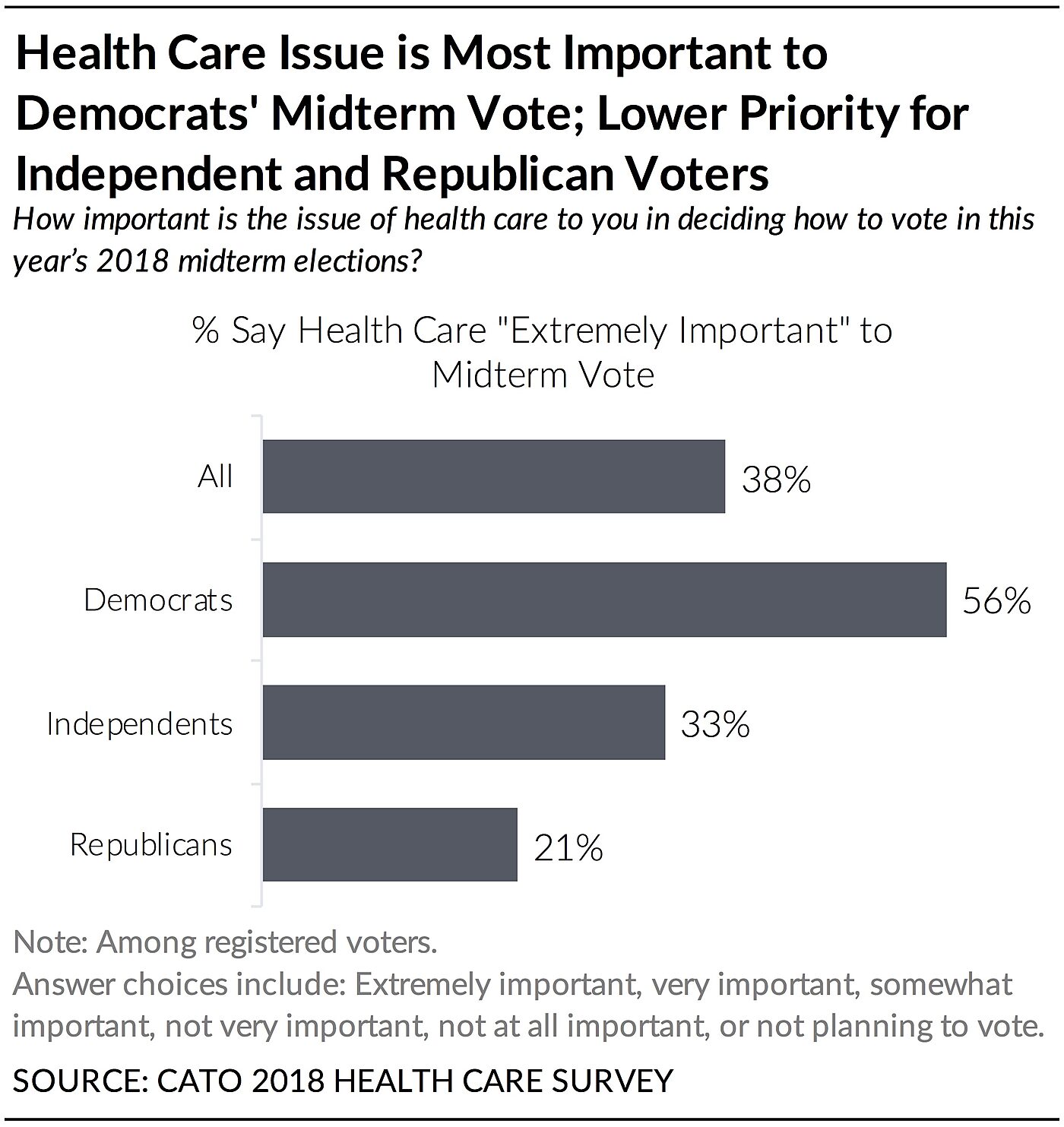 These results are consistent with analysis of 2018 campaign ads, which finds Democrats have made healthcare the centerpiece of their case to voters. About half of Democratic ads have featured health care issues compared to less than a third of Republican ads. At the core of the debate is what to do with pre-existing condition regulations embedded in the Affordable Care Act (ACA) that prevent health insurers from denying coverage or charging higher premiums to people with pre-existing conditions. Much of the public debate centered on pre-existing condition protections assume that these regulations enjoy widespread public support. However, these protections lose public support when voters learn about their costs, finds the Cato 2018 Health Care Survey.

The survey first replicated the results from myriad other surveys finding a majority (65%) of Americans favor regulations that prohibit insurance companies from refusing to cover, or charging higher premiums to, people with pre-existing conditions, while 32% oppose. However, support plummets when Americans are faced with likely consequences of these regulations. 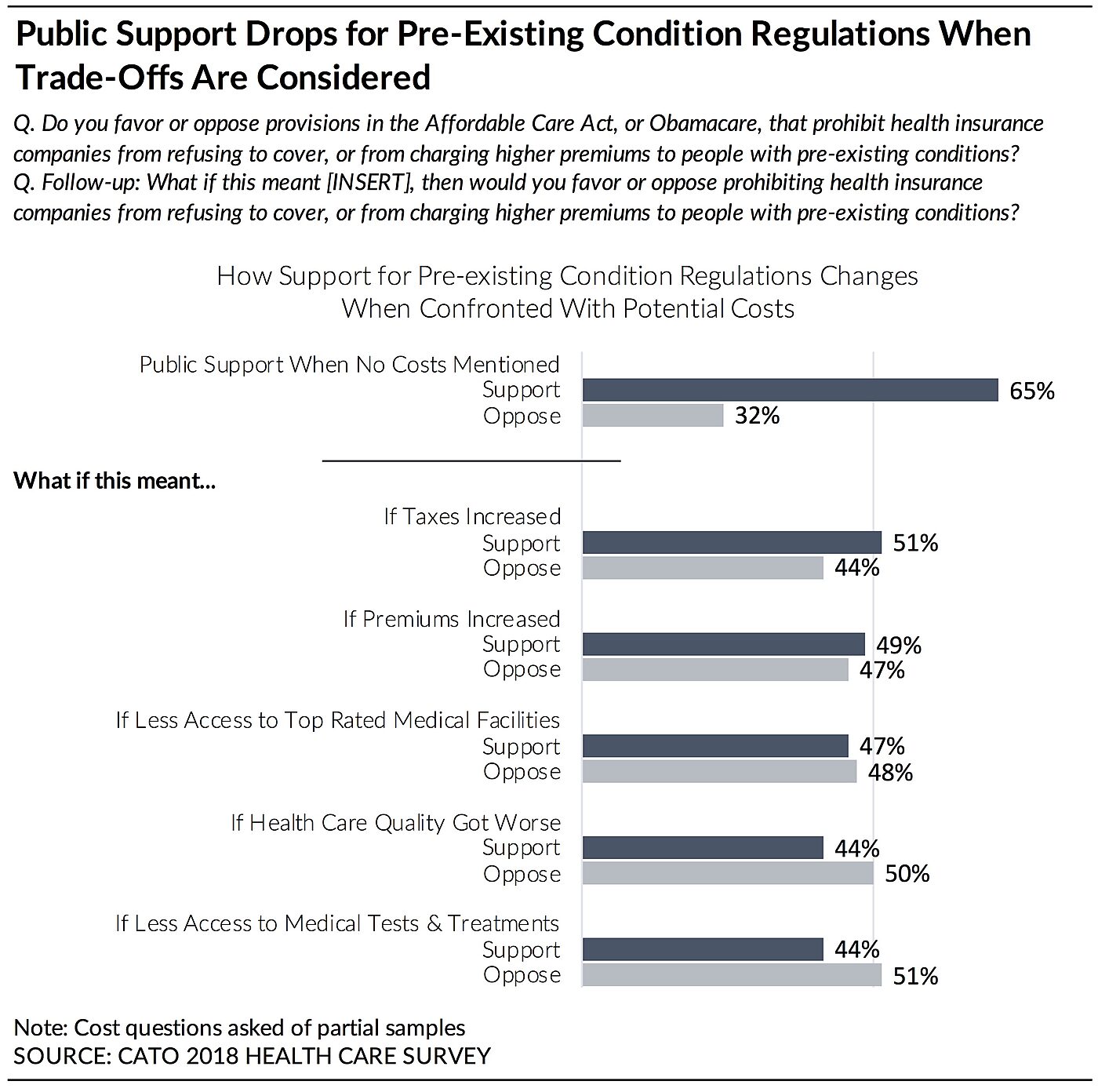 Compared to quality reductions, Americans are more prepared to pay higher taxes or premiums in exchange for keeping regulations that prevent insurers from denying coverage or charger higher premiums to people with pre-existing conditions. About half (51%) would favor and 44% oppose if these regulations raised taxes and 49% would favor and 47% would oppose if they drove up premiums.

These results follow a familiar pattern identified in the Cato 2017 Health Care Survey that asked about each of these pre-existing condition protections separately. However, in this year’s survey we improve the desirability of these regulations by offering them as a bundle. Even still, when faced with the realistic costs of these mandates, public support plummets. 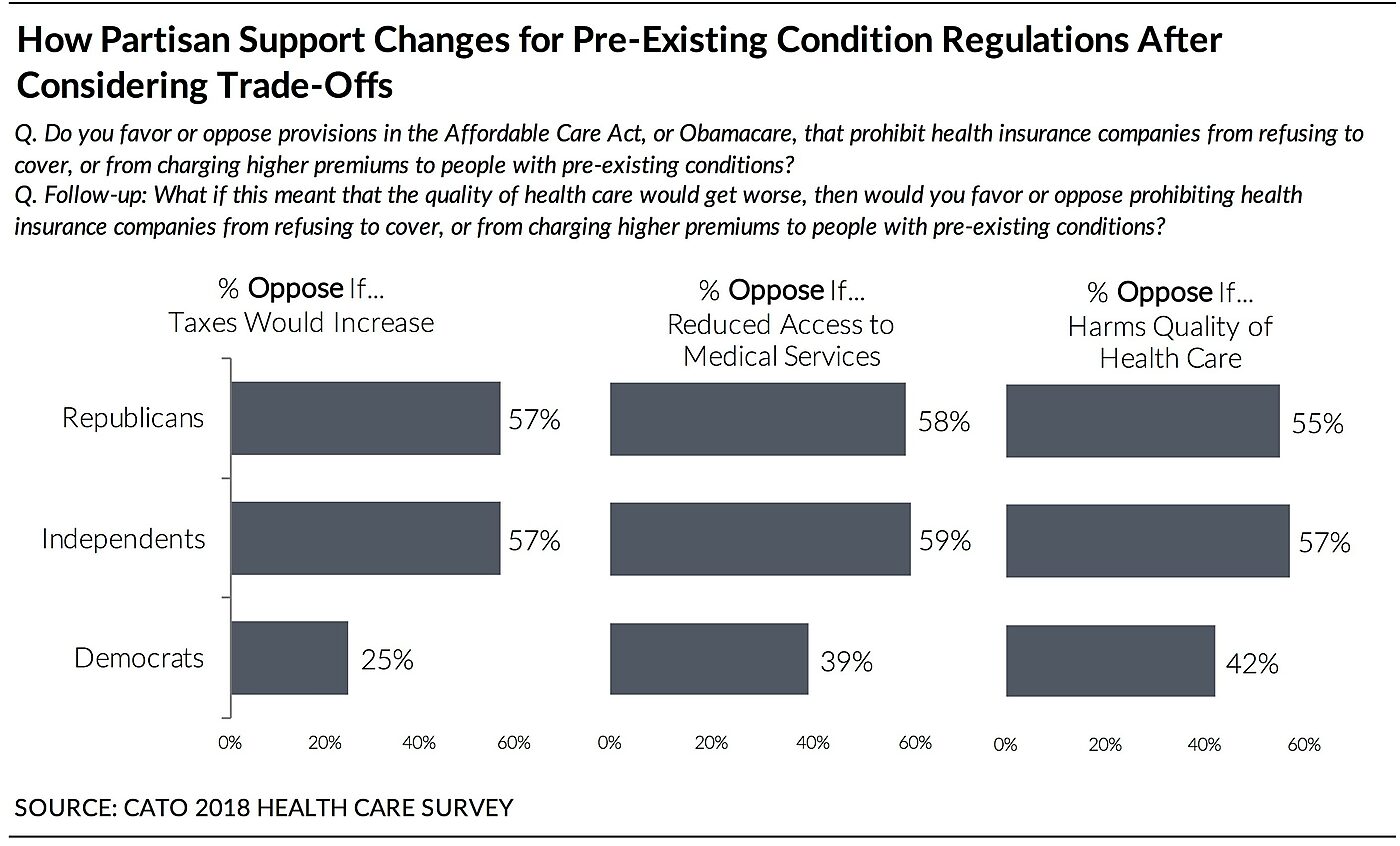 Taking a look among partisans, we find that without any mention of costs, 83% of Democrats, 55% of independents, and 52% of Republicans initially support pre-existing condition protections. However, independents and Republicans turn against these regulations if they increase the cost of health insurance (66%, 55%), reduce access to medical tests and treatments (59%, 58%), harm the quality of health care people receive (57%, 55%), reduce access to top-rated medical facilities and treatment centers (57%, 55%), or increase taxes (57%, 57%). Democrats are less swayed by these trade-offs; however, they are least willing to sacrifice the quality of health care in exchange for keeping the pre-existing condition regulations (42%). Instead, majorities of Democrats are willing to have less access to medical tests (57%), or top-rated medical facilities (61%), or pay higher premiums (67%) or taxes (72%). Some differences in how partisans answer these questions may depend, perhaps, on how believable these costs seem to respondents rather than how acceptable they are. For instance, since Democrats are most enthusiastic about these regulations, they may be less likely to believe that they could harm the quality of care. 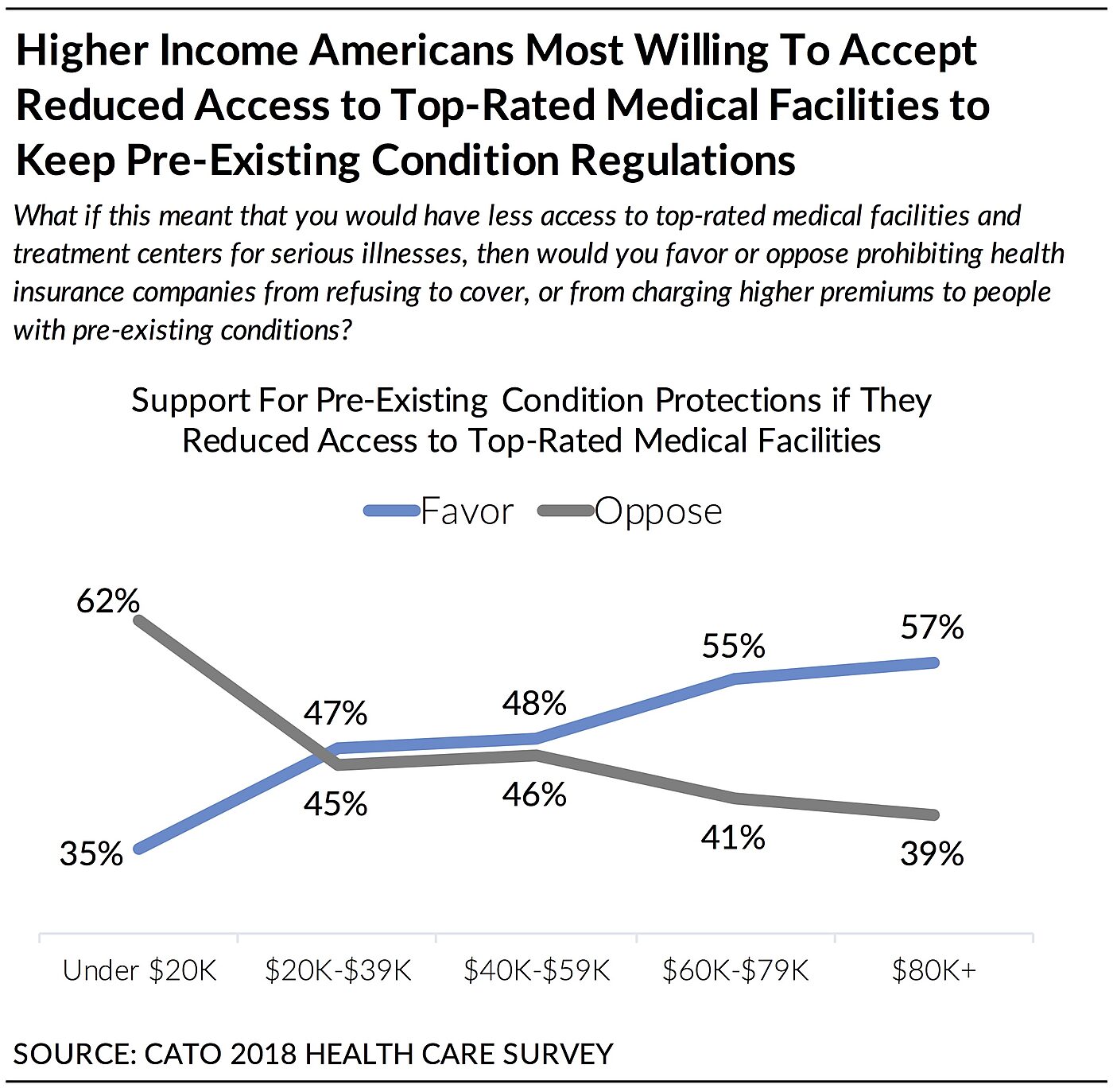 First, the survey presented respondents with only the anticipated benefits of the new federal rules. Doing so finds that 77% of Americans support new federal rules that allow consumers to purchase health insurance plans that cost 50% less and offer greater choices of hospitals and doctors than current plans and would cover 2 million more uninsured people. 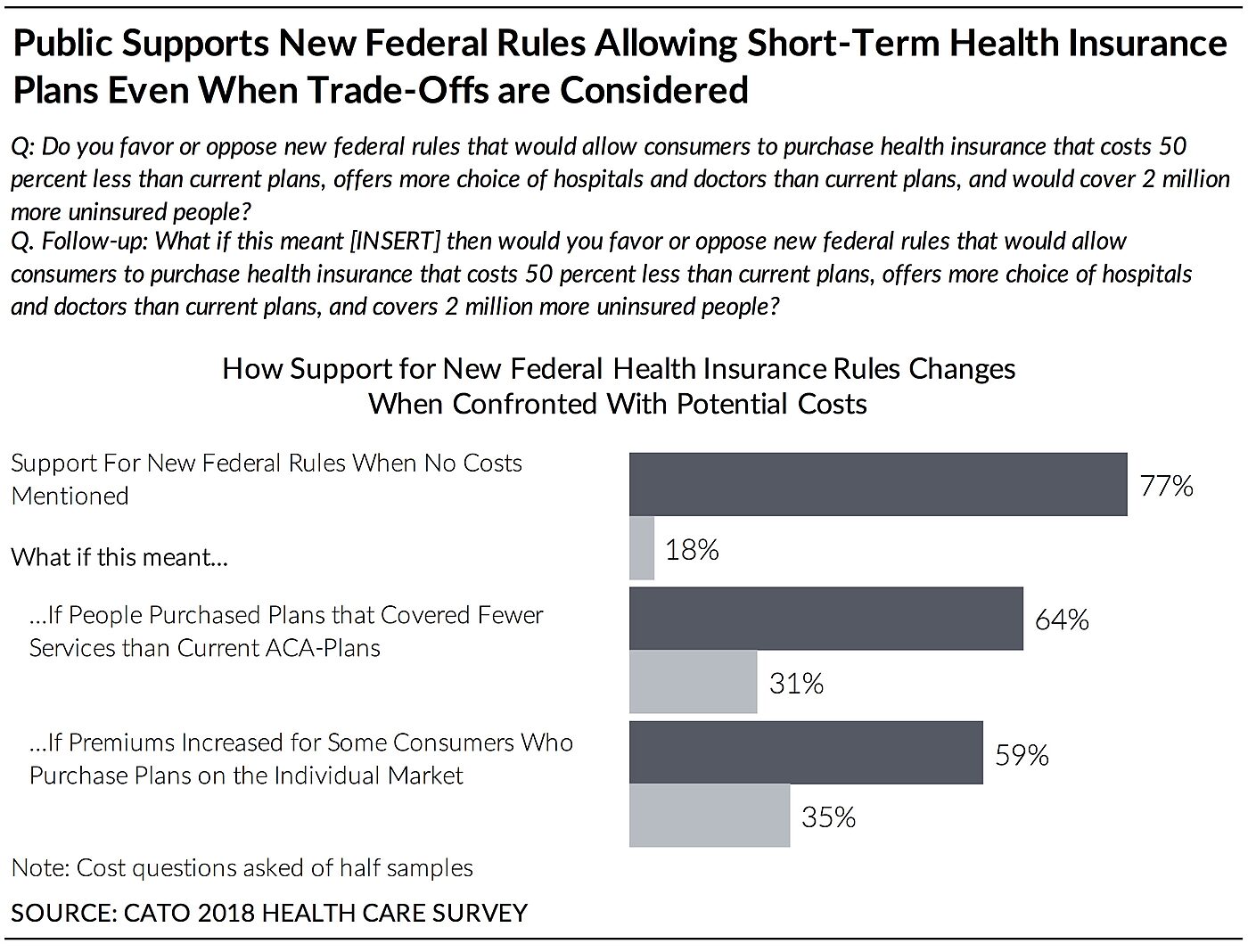 Support drops to 64% in favor and 31% opposed if these rules meant that some people would purchase insurance policies that cover fewer services than current plans. For instance, these new plans would not be required to cover services like mental health and prescription drugs.

One reason why such plans have lower premiums is they do not have to comply with ACA pre-existing condition regulations and thus may exclude people, or offer limited services to people, with expensive medical conditions. These lower premiums could draw people who use fewer medical services out of the ACA-compliant plans and thus increase premiums for those who remain in those plans and are not eligible for subsidies. Nevertheless, the survey finds that 59% would continue to favor while 35% would oppose these new rules if they caused premiums to rise for some people who purchase insurance plans in the individual market.

These rule changes are popular among partisans with 77% of Democrats and 86% of Republicans in support. Majorities of Democrats and Republicans continue to favor allowing people to purchase non-ACA compliant plans even if doing so means people would not have as many services covered (58% and 71%) or if doing so increased premiums for unsubsidized people in the individual market (63% and 65%). 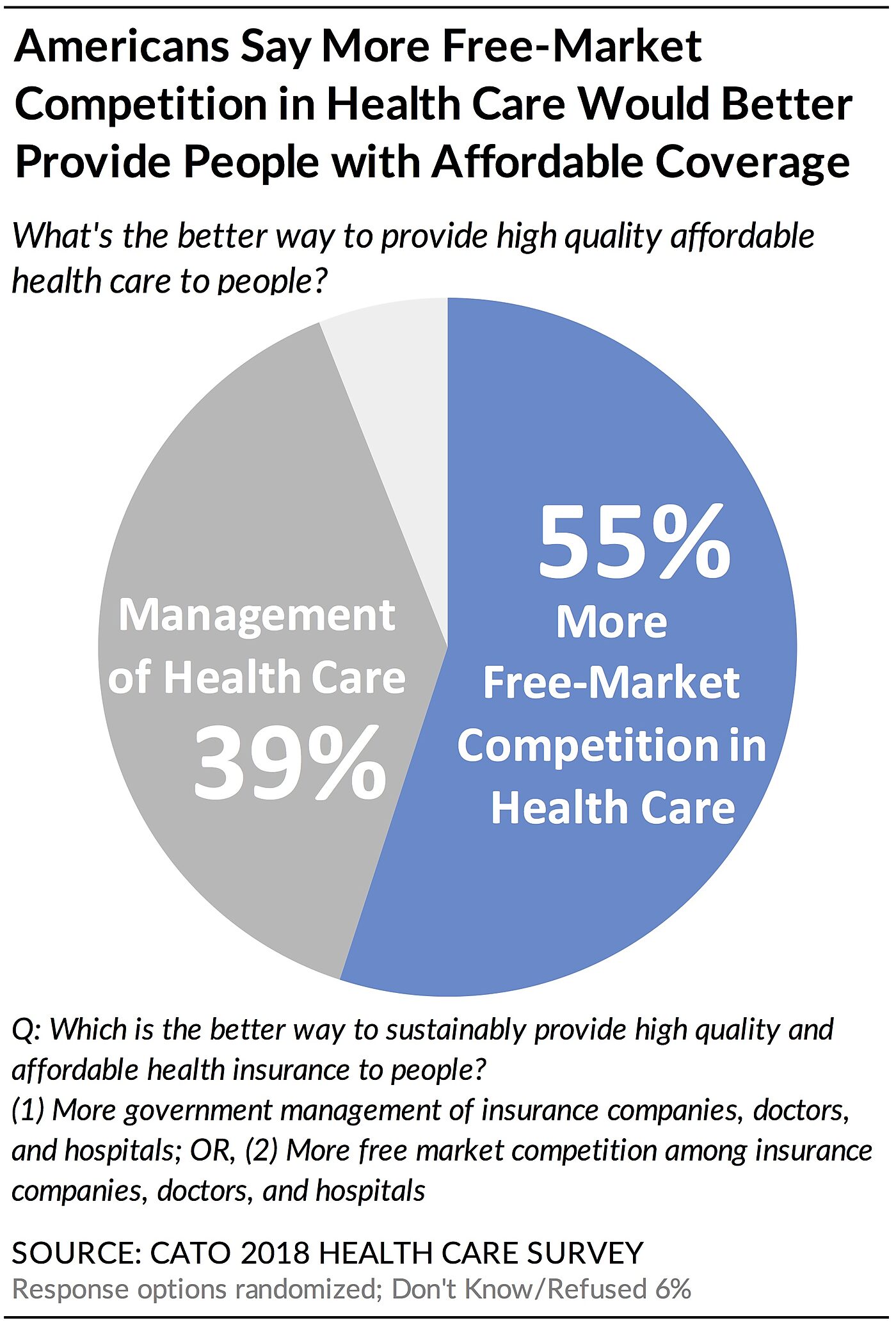 Independents (54%) and Republicans (79%) agree that more free-market competition rather than more government management of health care is more likely to lead to affordable coverage. However, a majority (60%) of Democrats think more government management is the key. Despite these partisan differences, majorities or slim majorities of whites (58%), African Americans (53%) and Hispanics (51%) believe more free market competition can better provide affordable health care than more government control.

These results do not support the widespread misperception among the political punditry that pre-existing condition regulations are necessarily and universally supported by voters across the political spectrum. Voters like benefits but not costs. And some costs are more acceptable to voters than others. Democratic accountability demands that we understand if voters are willing to bear the necessary trade-offs and costs in exchange for establishing a new policy, regulatory protection, or social program. But first, pollsters have to ask.

Full survey results found here.
Sign up here to receive forthcoming Cato Institute survey reports.
The Cato Institute 2018 Health Care Survey was designed and conducted by the Cato Institute in collaboration with YouGov. YouGov collected responses online October 26-30, 2018 from a representative national sample of 2,498 Americans 18 years of age and older. The margin of error for the survey is +/- 2.66 percentage points at the 95% level of confidence.