On Thursday, President Obama is expected to announce the specific provisions of his immigration executive order.  This order will have broad policy implications.  Below is a brief explanation of the changes in policy likely to be announced and their economic effects based on the leaked information.

The most contentious portions of the executive order will be the legalizations.  Many of the beneficiaries of all the legalization programs would be eligible for legal status through more than one program, creating significant overlap and making it difficult to predict exactly how many people would be eligible.  Below I will analyze each one and then sum up what the economic consequences are likely to be.

This would expand the deferred action for childhood arrivals (DACA) program that allowed unlawful immigrants who were brought into the United States when they were under the age of 16, resided here since June 2007, were under 31 years of age as of June 2012, who were not convicted criminals, and who were either high-school graduates or were still attending school.  Those deferred were eligible for a two-year work permit under the Code of Federal Regulations.  An estimated 1.7 million unlawful immigrants were eligible for this program but only 675,000 have been granted DACA status – about 40 percent of the total.

Obama’s change would move the cut-off date from June 2007 to January 2010 and still apply to anyone who was brought here under the age of 16.  President Obama’s administration estimates that this could apply to nearly 300,000 unlawful immigrants.  As we saw with DACA, however, not all of those available will come forward because this legalization is merely temporary and they fear giving the government their identity information, among other reasons.  If DACA is any guide, about 120,000 additional unlawful immigrants will directly benefit from this provision.

A note about the 300,000 figure used by the Obama administration: Pew reports that there are 650,000 unauthorized minors without DACA or temporary protected status, but it is not clear how long these children have been in the United States, meaning many may have entered after January 2010 and therefore wouldn’t be eligible.  President Obama’s estimate could be too high or too low based on the paucity of data. 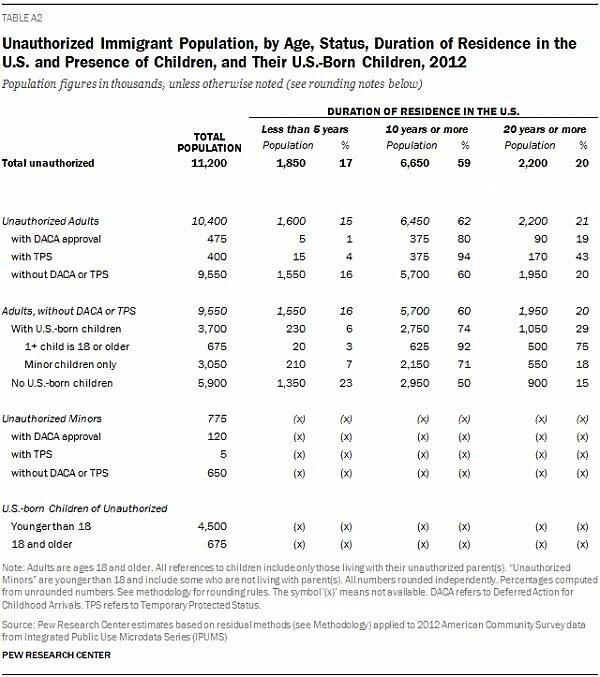 This would be the biggest legalization in Obama’s executive order.  This would defer the deportations of unlawful immigrants who have been here for more than five years and who have children who are either U.S. citizens or green card holders.  The president estimates that this would apply to about 4.5 million unauthorized immigrants, and the Pew data supports this. 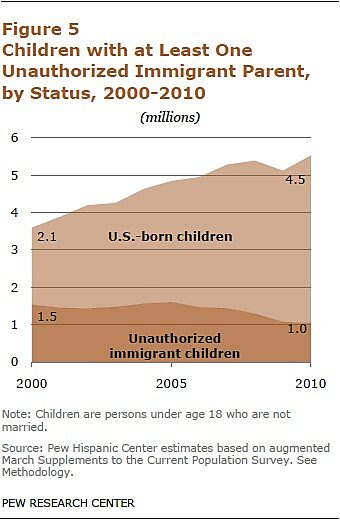 This would expand a provisional waiver program for the unlawful spouses and children of permanent residents and U.S. citizens.  As I wrote here, under current law, unlawful immigrant spouses or children of U.S. citizens can gain a green card if they return to their home country to apply at a U.S. consulate or embassy.  However, unlawful immigrants who have lived here are barred from returning for up to ten years once they leave the U.S. due to the three and ten year bars.  If this executive order goes into effect, unlawful immigrants can apply for a waiver of those bars.  Obtaining a waiver was made easier in March 2013.

It’s unclear how Obama would change this requirement.  Most likely, his order would significantly shorten the wait times abroad.  Ideally, the waiver would be approved more quickly for a larger group of people.  Those unlawful immigrants granted the waiver would then be able to travel to their home countries for interviews at U.S. consulates within weeks, rather than waiting years, in some circumstances.  They would then be able to enter the United States legally.

This would not remove the requirement to leave the United States for the interview at a consulate.  Expanded parole addresses that concern.

Currently, the government allows "parole in place" for unlawful immigrant parents and spouses of U.S. military members.  Normally, unlawful immigrants cannot adjust their immigration status even if they are otherwise entitled to a green card through the immediate-relatives category because they were not inspected prior to their admission into the United States.  However, an infrequently used portion of the statute allows a parole of such unlawful immigrant as immediate relatives of U.S. citizens, allowing them to gain legal immigration status without leaving the United States.

There are roughly 10.5 million unlawful immigrant adults in the United States.  Of those, 3.7 million have at least one U.S.-born child but other offenses will bar many of them from adjusting their status.

The Economic and Other Effects

The economic impact of this legalization will be positive.  In the wake of the 1986 Reagan amnesty, wages for legalized immigrants increased – sometimes by as much as 15 percent – because legal workers are more productive and can command higher wages than illegal workers.[i]  Being legal also allows these immigrants to invest in U.S.-specific human capital, like learning English, which will increase their productivity and wages.  Unlawful immigrants are less likely to make these investments in human capital because they could be deported, thus wiping out such investment.  We will likely see a similar increase in the wages of many of the unlawful immigrants legalized today.  This benefit would likely accrue to all of the working unlawful immigrants who would be legalized under this executive order.

Professor Raul Hinojosa-Ojeda of UCLA wrote a paper for Cato in 2012 in which he employed a dynamic model called the GMig2 to study comprehensive immigration reform’s impact on the U.S. economy.  He found that a full legalization of unlawful immigrants will increase U.S. GDP by about $700 billion dollars over the next ten years, primarily by allowing the legalized workers to be more productive.  Any impact of legalizations on GDP would be smaller under an executive order because many of them would be temporary and it would not cover the entire unlawful immigrant population, but it would still produce hundreds of billions of dollars of more GDP within ten years.

The 1986 amnesty can provide some clues as to what will happen to the unlawful immigrants who become legalized through the parole and waiver process, thus earning them green cards.  First, many of them will not naturalize.  By 2009, only 45 percent of those legalized under the 1986 Reagan amnesty eventually gained citizenship.  Most seemed perfectly willing to work and live here on a green card.

A big reason why the number of unlawful immigrants increased so much in recent decades is that the three and ten year bars and greater border security raised the costs of returning to their home countries.  Prior to the bars being enacted in 1996, unlawful immigration was a largely circular phenomenon.  Unlawful immigrants would come for a few years, work here, return home, and often return to the United States again before eventually settling back in their home countries.  The three and ten year bars and boosted border security raised the cost of leaving the United States, prompting more unlawful immigrants to stay longer.  Legalizing these workers could prompt more circular migration and return to home countries, although the number will not be large because many of these immigrants have now lived here for so long.

Other Portions of the Executive Order

Other portions of the executive order are less controversial but will have important effects.

This is the only proposal in the executive order that could immediately expand legal immigration.  The details are vague, but there are several ways the president could increase the number of highly skilled immigrants and migrants without running afoul of statutory quotas.

One way would be to not count the family members of employment-based green cards against the cap.  Under current immigration law, about 140,000 green cards are set aside for highly skilled workers with job offers from American companies.  But only about 45 percent of those green cards went to workers in 2013, with the rest going to their families.  The government currently counts family members against the numerical green-card quota for workers without legal basis.

By not counting family members against the cap, the number of employment-based green cards issued every year would more than double.  Such a change in counting green cards would not prevent the families of green card workers from coming; it would merely stop counting them against the cap.  This reform would have the added benefit of virtually eliminating the backlog of green cards for immigrants from India and China.

Secure Communities (SCOMM) was a program begun in March 2008 and was initially piloted in 14 police jurisdictions by October of that year. At its peak, SCOMM was operational in over 3,000 jurisdictions in the United States, a 21,429 percent increase in jurisdictional reach during the first term of the Obama administration.  SCOMM links fingerprint from arrestees with government immigration and criminal databases.  If the Department of Homeland Security suspects an arrestee is an unlawful immigrant, it issues a detainer to hold the arrestee until the federal government can investigate.  SCOMM was effective at identifying and removing many unlawful immigrants but it was also supposed to decrease crime rates.  On the second point, it failed.

SCOMM did not decrease crime.  According to this paper that is forthcoming in the Journal of Law and Economics, “Secure Communities led to no meaningful reductions in the FBI index crime rate.  Nor has it reduced rates of violent crime – homicide, rape, robbery, or aggravated assault.  This evidence shows that the program has not served its central objective of making communities safer.”  Furthermore, immigrants in the United States are less crime-prone than the native born.

SCOMM also targeted many non-criminals who were arrested since the finger print check is at the point of arrest, not conviction.  Unlawful immigrants who commit violent and property crimes should be identified and deported, but a targeted enforcement system will likely be more effective than SCOMM without the collateral damage.

This would be a new Department of Homeland Security enforcement policy to prioritize the deportations of serious criminals, gang members, and others deemed a threat.  This is already done to a large extent but it could be improved.  Deemphasizing workplace raids and arrests of unlawful immigrants who do not have a driver’s license and focusing those resources on actual threats would be an improvement.

Obama is proposing a pay increase for officers at Immigration and Customs Enforcement.  Since Congress appropriates funds, Obama cannot do this on his own.

This part of his plan would put additional enforcement resources along the border with Mexico.  This will continue a pattern since 2012 when Obama began to deemphasize interior enforcement and instead focused on border enforcement.

Regardless, more border security would not decrease unlawful immigration very much.  A lower-skilled guest worker visa program would be far more effective and cheaper than spending more tax dollars on trying to shut down a vibrant black market.  However, the president cannot create such a program on his own.

Obama may lower the naturalization fee by 50 percent for the first 10,000 applicants.  The current fee is $680.  This is a token measure.  The fee is likely too high but this is small potatoes compared to the other immigration problems dealt with here.

Rivera-Batiz, “Undocumented Workers in the Labor Market: An Analysis of Earnings of Legal and Illegal Mexican Immigrants in the United States,” Journal of Population Economics, 1999.

Kossoudji and Cobb-Clark, “IRCA’s Impact on the Occupational Concentration and Mobility of Newly-Legalized Mexican Men,” Journal of Population Economics, 2000.

Kossoudji and Cobb-Clark, “Coming Out of the Shadows: Learning about Legal Status and Wages from the Legalized Population,” Journal of Labor Economics, 2002.