Removing the 3/10 Year Bars Is Not Amnesty

It’s no secret that the Senate’s proposed legalization for some unauthorized immigrants was a deal breaker in 2013. Detractors labelled such a legalization “amnesty” even though it is anything but that – and that label has stuck. That, at minimum, some unauthorized immigrants become legalized is economically and ethically imperative, so it’s time to consider less-than-comprehensive, keyhole solutions that will fix at least some of the problems with our immigration system.

One such solution, which even many of those opposed to immigration reform have endorsed, is a small legislative reform to the 3/10 year bars that will allow some unauthorized immigrants to depart and apply for reentry under the legal system without special treatment. This reform would avoid the so-called amnesty objection to immigration reform. 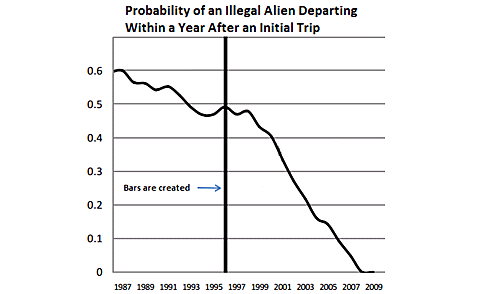 Source: Adapted and slightly edited from Doug Massey's "Chain Reaction: The Causes and Consequences of America's War on Immigrants." http://www.iza.org/conference_files/amm2011/massey_d1244.pdf#page=29 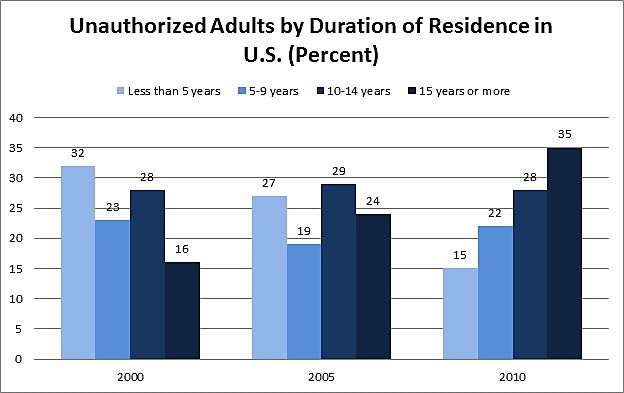 The number of unlawful immigrants who entered annually after 1996 was about the same as entered annually before, but since fewer left after the bars were enacted the population grew much more rapidly after the 3/10 year bars were put in place. According to Doug Massey at Princeton, if the same percentage of unauthorized immigrants had left during the 1990s and 2000s as left before the bars, there would be 5.3 million fewer unauthorized immigrants here today. Many would have returned home and others would have earned green cards through the family-based immigration system.

All else remaining equal, immigration policy should encourage unauthorized immigrants to apply through the legal system – many of whom would now be able to reenter lawfully through the family immigration system if the 3/10 year bars were removed. Removing the 3/10 year bars would not be an amnesty for unauthorized immigrants, even though it would allow some of them here illegally to use the current system without a comprehensive reform.

. . . but don’t take my word for it. Here are what many people, including some noted immigration restrictionists and conservative Republicans (no, they aren’t the same), have said in support of removing or reforming the bars:

None of the people listed above would support broad-based legalization or amnesty. However, they all agree that removing or reforming the 3/10 year bars is a desirable reform that falls far short of “amnesty” but would nevertheless legalize many current unauthorized immigrants.