Shortly before Christmas, the Department of Homeland Security (DHS) released a report detailing deportations (henceforth “removals”) conducted by Immigration and Customs Enforcement (ICE) during fiscal year 2015.  Below I present the data on removals in historical context – combined with information from the Migration Policy Institute and Pew.  See my previous writing on this topic here, here, and here. 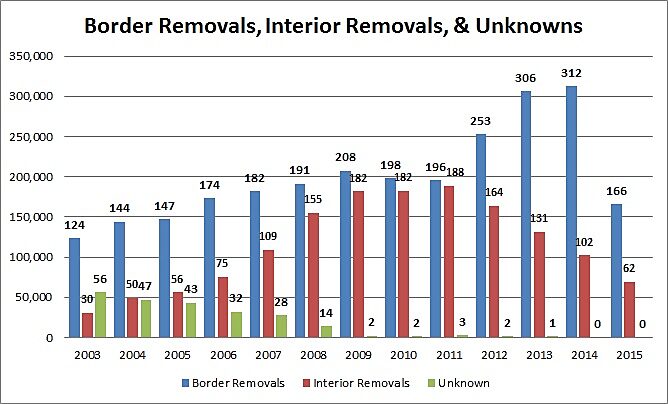 The Obama administration’s expansion then slashing of interior enforcement is not the whole story.  The best way to measure the intensity of immigration enforcement is to look at the percentage of the unauthorized immigrant population removed in each year.  Based on estimates of the total size of the unauthorized immigrant population that I updated to reflect Pew’s most recent estimates, 0.61 percent of that population was removed from the interior of the United States in 2015 – down from 0.9 percent in 2014.  Interior removals as a percent of the unathorized population peaked at 1.64 percent in 2011.  That is a substantial decrease in interior removals down from President Obama's previous high.

Obama’s interior removal statistics show a downward trend beginning in 2012 through to 2015 with the number of interior removals falling by over 63 percent.  The Obama administration has also focused immigration enforcement on criminal offenders (not all unlawful immigrants are criminals).  During the Obama administration, 56.7 percent of all removals have been those convicted of a criminal offense, including immigration crimes.  In 2015, 92 percent of criminal removals were either priority 1 (threats to national security, border security, and public safety) or priority 2 (misdemeanants or new immigration violators).  Many of those “criminals” removed fit the strict legal definition of the word but hardly comport with the popular image of criminals.

Only the last year of the Bush administration is available for comparison but it shows that only 31 percent of those removed were criminals in 2008.