So how does Obama’s enforcement record compare to the years before he took office?  Is he under-enforcing or over-enforcing immigration laws relative to what we’d expect given the size of the unauthorized immigrant population? 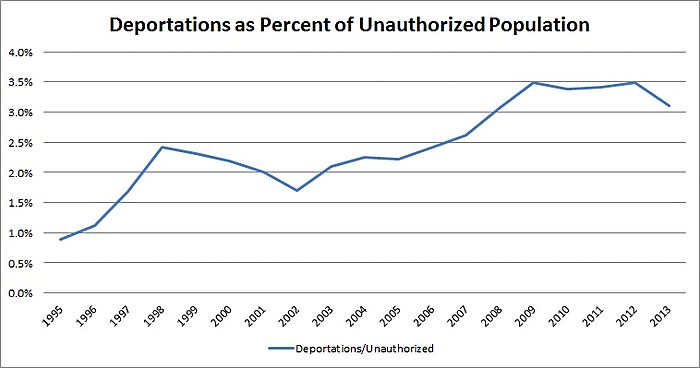 Shifting subjects a bit, these deportation numbers point to just how effective immigration enforcement is.  There are only 11.7 million unauthorized immigrants in the United States – an admittedly large number – but much smaller than I would expect given the tremendous economic gains from coming here.  Measured in that way, most would-be unauthorized immigrants actually follow our laws.

Last June I wrote a post where I was shocked at just how low the total number of unauthorized immigrants is.  Here is an updated chart from that post using data that is more specific to the characteristics of the immigrants themselves and the skilled-specific occupations they’re most likely to have in the United States.

Our immigration laws are terribly restrictive, do great harm to immigrants and Americans, and are responsible for creating such a large unauthorized immigrant population in the United States.  But immigration laws, unlike most other laws, are intended to regulate foreigners more than Americans, so just examining the number of unauthorized immigrants in the U.S. is not a good measure of how well-followed or enforced these laws are.  Given the number of people who want to immigrate here, the relatively low price of coming here illegally, and the tremendous economic gains from doing so, our immigration laws are shockingly well-enforced and followed by most people of the world.