Last May I wrote a blog post about President Obama’s immigration enforcement record. In that post I made some assumptions about the percentage of all "interior removals" (that is, deportations of illegal immigrants who were living in the United States) for the years 2001—2007, because of a lack of data.

A recent report from the Migration Policy Institute (MPI) fills in those data gaps, except for the first two years of the Bush administration. Here are the updated data:

The total number of internal removals over the last six years of the Bush administration was about 475,000. From 2009 to 2013, the Obama administration removed just under 848,000 from the interior. Those numbers make for an incomplete comparison of the two administrations' enforcement policies, but they paint an interesting picture.

On average, President Bush removed about 276,000 unauthorized immigrants per year for the years data are available. That is total removals, including both interior and "border" removals; interior removals alone averaged 79,000 annually. President Obama has removed an average of 404,000 unauthorized immigrants a year, including an average of 170,000 interior removals. It should be noted that initially there were large numbers of "unknowns"—that is, removals that were not classified as either interior or border—during the Bush administration, but those numbers decreased in the administration's later years and have been very small so far during the Obama administration. 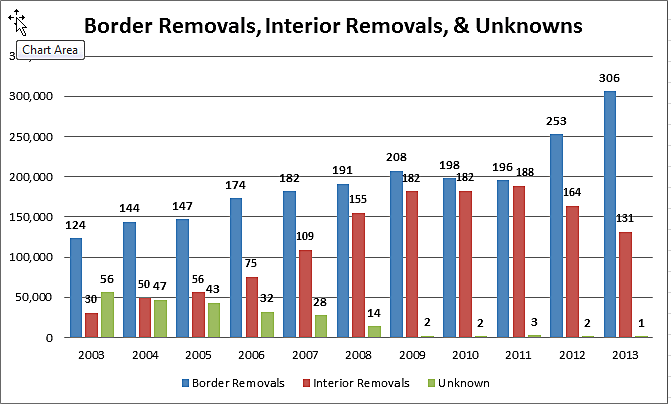 As I’ve written before, the best way to measure the intensity of immigration enforcement is to look at the percentage of the unauthorized immigrant population deported in each year. 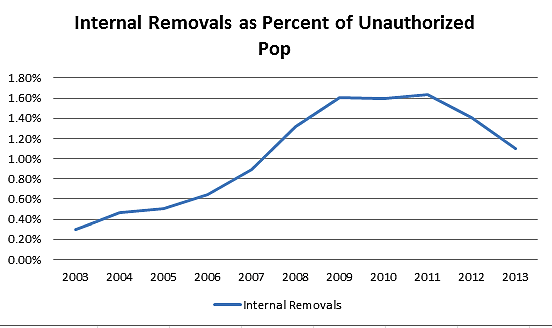