The recent Omnibus increased H-2B visas for seasonal non-agricultural workers by not counting some renewals against the annual cap of 66,000.  Numerical estimates of the increase vary widely but the Congressional Budget Office estimated 8,000 additional H-2B visas will be issued in 2016.  This small policy shift is consistent with channeling would-be illegal immigrants onto temporary work visas – a strategy that has succeeded in decreasing unlawful immigration.

There has been a dramatic decrease in Mexican unlawful immigration over the last decade.  The majority of illegal immigrants apprehended along the border had always been Mexican until 2014.  Beginning in 2006, with the slowdown in the housing boom, fewer Mexicans started coming to the United States illegally which led to fewer apprehensions.  The number fell to 229,178 in 2014, down from 1,073,468 in 2004.

Mexican illegal immigration did not rebound after the Great Recession because the United States had expanded temporary migration programs that allowed far more Mexicans to enter lawfully.  Mexican migration to the United States didn’t disappear – it just became legal.  The Omnibus’ modest expansion of H-2B visas builds on this successful strategy by widening the legal pathway for lower-skilled migrant workers.

The Omnibus’ H-2B visa reform is an important, albeit small, part of continuing this strategy.  H-2B admissions are up 20 percent from 2002 to 2013 while the percentage of Mexicans getting those visas rose from 64 to 84 percent.  As the H-2B expanded, it also Mexicanized, diverting many would-be Mexican unlawful immigrants and their families onto legal temporary migrant visas.

There has been a tremendous rise in the number of temporary migrants on E, H, O, P, and L visas along with their derivative family members.  Their number of admissions increased by 104 percent from 2002 to 2013, from about 1.5 to 3 million (Chart 1). The number of Mexican temporary migrants admitted increased 512 percent during the same time period, which explains the rapid collapse in Mexican illegal immigration.  Mexican migrants didn’t stop coming after 2006, they just came legally as the temporary migrant programs expanded.

Chart 3 combines the gross number of Mexican illegal immigrants (gross) who successfully entered the United States each year with the number of Mexican temporary migrants.  It reveals a line that shows a dip during the Great Recession that soon recovers afterward to the pre-recession migration levels.  The only difference post-recession is that most of them are coming legally.  An average of 929,000 entered each year from 2002 to 2005.  During the post-recession years of 2010 to 2013, an average of 930,000 entered each year. 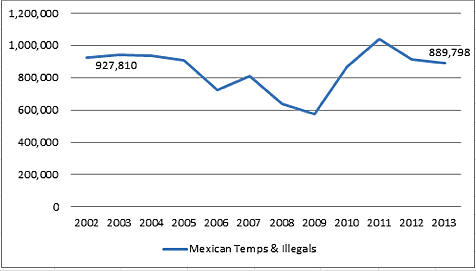 Chart 3 obscures the spectacular decline of Mexican illegal immigration that began in 2006 and the increase in legal temporary Mexican migration that took its place.  Beginning in 2009, an increase in temporary migrant visas funneled Mexicans who would have otherwise entered illegally onto visas (Chart 4).  The number of admissions for Mexican temporary migrants surpassed illegal Mexican entrants in 2008 and every year afterward.  The percent of all Mexicans that entered on temporary visas (excluding green cards) increased from 11 percent in 2002 to 57 percent in 2008 to 71 percent in 2013.  I attribute this shift to both an increase in temporary migrant admissions which decreased the supply illegal Mexican entrants by funneling them in to a legal market.

Temporary legal migrants gradually displaced those who came illegally.  From 2002 to 2008, the change in the number of Mexican illegal immigrants each year explains 97.8 percent of the variation in all Mexican entrants.  From 2009 to 2013, the annual change in temporary migrants on visas explains 97.8 percent of the annual variation in all Mexican entrants.  Legal temporary visas are now driving Mexican migration.

The temporary visas also include the family members of these workers who enter as derivatives.  Family reunification has been an important component of unlawful immigration so allowing them to come reduces the pressure to migrate illegally.

Each visa issued during the 1950s-era Bracero guest worker visa program displaced 3.4 illegal workers.  If anything like that relationship hold today, the expansion in temporary migrants visas and mobility is the only policy preventing a re-ignition of unlawful Mexican migration on a pre-recession scale.

Another explanation for the decrease in Mexican illegal immigration is that border enforcement improved and became an actual deterrent.  The same people who make that argument also paradoxically claim that President Obama left the border wide-open, but no matter. 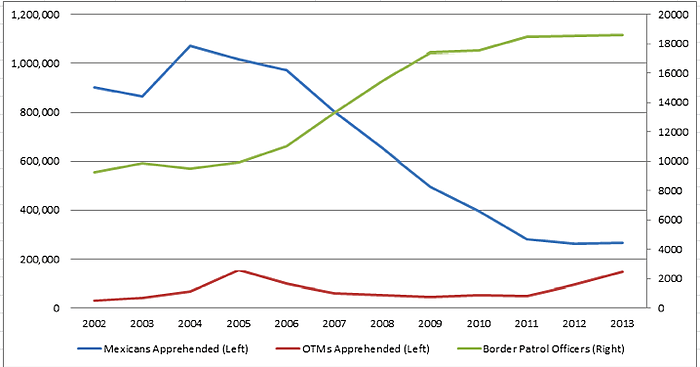