There are two main issues surrounding the increase in the migration of unaccompanied children (UAC) and asylum seekers in recent years that have recently reached crisis proportions.  The first is the treatment of those children who are apprehended by Border Patrol and how American policy is reacting to the surge.

The second is explaining why UACs are coming.  Below I will lay out three different theories that attempt to explain the surge in UACs.  Each theory has some merit and I present evidence in support and opposition to each one.

Immigration by stages and family reunification could explain part of the UAC border surge.  Stage migration works like this:  First, the single breadwinner of the family immigrates to find work in the United States.  After getting established, finding employment, and figuring out how to function in his new country, the initial immigrant then sends for the rest of his family.  Sometimes the initial immigrant’s spouse will come alone while leaving the children in the care of extended family.  Often times, after the second parent is working, they will then have the funds to send for the children to join them in the United States.

This pattern of family separation through stage immigration and eventual reunification is a desperate strategy undertaken by poor people who don’t have any other options.  Regardless, it explains part of the surge in unaccompanied children who are joining their unlawful immigrant parents and families who previously arrived in the United States.

Smuggling prices for unauthorized immigrants from Central America are higher than for unauthorized Mexican immigrants.  Mexicans pay about $4000 to be smuggled to the United States by land and $9000 to be smuggled in by sea.  Guatemalans pay about $7000.  But since Guatemalans are so much poorer than Mexicans, on average, it can take many more years for them to save for the trip, often meaning that both parents are more likely to come to the United States first to work and send money back to Guatemala to finance the sending of their children.  As a result, many of the children would come alone.

The price of human smuggling has risen substantially due to increased U.S. border enforcement.  The higher price of migrating and the relative poverty of Central American migrants mean that families are more likely to be separated during the migration process, explaining part of the surge in UACs from Central America.  Ironically, increased border enforcement and crackdowns on human smugglers have probably caused more family separation and eventual reunification – partly explaining the scale of the current UAC migration.

During the Great Recession, the stock of unauthorized Mexican immigrants dropped in the United States.  A growing Mexican economy coinciding with a collapsing American one incentivized many unauthorized Mexican immigrants to return and stanched the flow of new arrivals.  According to Pew, there was a net decrease in the numbers of Mexicans in the United States from 2005 to 2010.  However, the stock of unauthorized immigration from other Central American countries shot up in 2010.

The large rise in UACs between 2011 and 2013 from Central American countries other than Mexico followed a large increase in the stock of unauthorized immigrants from those countries between 2009 and 2010.  Many of the UACs coming now are reuniting with their parents and extended families who unlawfully immigrated years before. 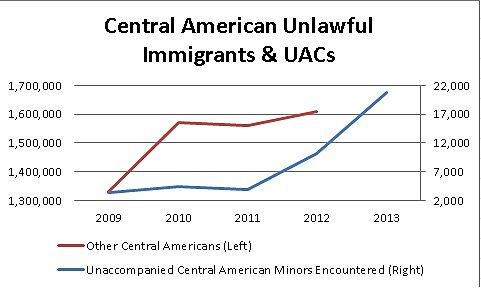 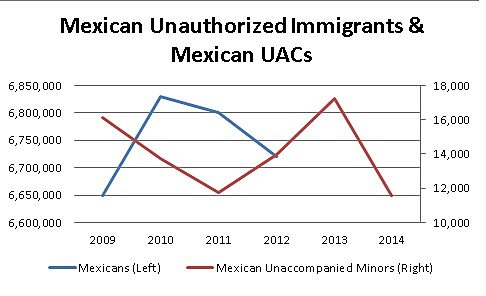 Data collected at the end of this fiscal year will reveal how useful this theory is.  If the number of Mexican UACs in 2014 is less than in 2013, that would lend support to the family reunification hypothesis.  If the number of Mexican UACs by the end of 2014 climbs above that of 2013, then it would be evidence against the family reunification hypothesis.  If this hypothesis is correct, I would expect the number of UACs from Central America to increase this year over last year.  I lack data on the stock of unauthorized immigrants in the United States post 2012.  More data is required to properly evaluate this theory.

If the family reunification theory explains a large proportion of the increase in UACs, then legalizing the current stock of Central American unauthorized immigrants and allowing them to use the legal family based green card program to reunite with their families would decrease the numbers of UACs.  Furthermore, a large-scale lower skilled guest worker visa program available to Central Americans would incentivize circular migration, obviating the demand for family reunification in the United States.

This theory posits that UACs are being driven from their home countries due to violence.  The deteriorating crime situation has finally gotten so bad that the best choice for thousands of children and asylum seekers is to emigrate to the United States and other countries.  There is a lot of evidence to support this theory.  The United Nations High Commissioner for Refugees (UNHCR) survey of 404 UACs who arrived to the United States during and after October 2011 revealed that many decided to come because of escalating crime in their home countries.

The high murder rate in Central American countries is consistent with those tales of violence.  Since much of that violence is targeted against young people, it is consistent with why there has been a large increase in UACs.  The young are especially at risk of gang violence and homicides.  Sending young children before they are of age to be criminal targets seems prudent from the perspective of parents or family members in this situation. 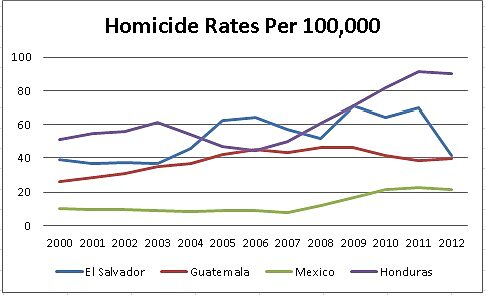 Furthermore, the recent decline in homicide rates in Central American countries, 41 percent in El Salvador from 2011 to 2012, should not be accompanied with increased numbers of UACs if this theory is correct.  Perhaps other violence or criminal activity has become more pervasive in Central American countries and can explain the surge but homicides cannot do it alone.

The most persistent theory attempting to explain the surge in unaccompanied children coming across the border is that they have been drawn here by the Obama administration’s so-called lax enforcement policy.  This is in addition to the usual economic magnet.

Deferred Action for Childhood Arrivals (DACA), the program put in placed by President Obama in mid-2012 to temporarily defer deportations for some unauthorized immigrants who were brought here as children, could be a draw to unaccompanied children.  None of the children now coming across the border are eligible for DACA.  Regardless of the legal reality, there is clearly a building perception in some Central American countries that children will be able to stay in the United States because of DACA if they are apprehended by border patrol.

Survey data from the UNHCR survey of UACs from previous years showed that only 9 out of 404 of them mentioned that changes in U.S. immigration laws or enforcement was the reason they came.  Anecdotes certainly suggest that that number has increased in 2014, but by how much?  Interestingly, the surge began before DACA was announced by President Obama in mid-2012.  DACA could have fed the increase after 2012 though.  According to the survey of previous years, family reunification and violence were much bigger reasons for UACs to come to the United States.

Immigration enforcement along the U.S. border has not been gutted.  Beginning in 2005 there has been a large and sustained augmentation of Border Patrol resources and an expansion of their powers along the border.  Although apprehensions by Border Patrol have decreased during the Great Recession because fewer unauthorized immigrants are drawn to our lackluster economic growth, border enforcement has never been tougher and more apprehended border crossers have never faced harsher punishments.  The gate has clearly not been thrown open.

However, there is mounting evidence that few UACs are actually deported after their apprehension – with the exception of Mexican UACs who are returned.  That could be the basis for a signal to others in Latin America that U.S. immigration enforcement is very lax or that there are exceptions for children unauthorized immigrants.  Even if border enforcement has not been gutted, many UACs are turning themselves in because they think they will be treated leniently.  If the UAC believes they will be granted some sort of legal status, the actual state of border patrol and border enforcement is irrelevant to their decision.

Remember, other Latin American countries have also recently experienced increases in asylum seekers from El Salvador, Honduras, and Guatemala. Clearly, an asylum seeker from Honduras who tries to enter Panama is not incentivized to move because of President Obama’s supposed lax immigration enforcement or pro-legalization policy.  However, the number of asylum seekers going to other Central American countries is small.  Mixed and misinterpreted U.S. immigration enforcement signals have certainly incentivized some of the UAC emigration from Central America but it is not the only explanation.

United States' policy for child asylum seekers could also explain some of the surge, although there was a considerable time delay.  Legal changes, including several laws in the early 2000s and a settlement agreement in 1997, require the government to release the juveniles from custody without unnecessary delay to the parent, legal guardian, adult relative, or others who can take care of the child.  Many of these children will be able to make asylum claims while others will eventually be deported.