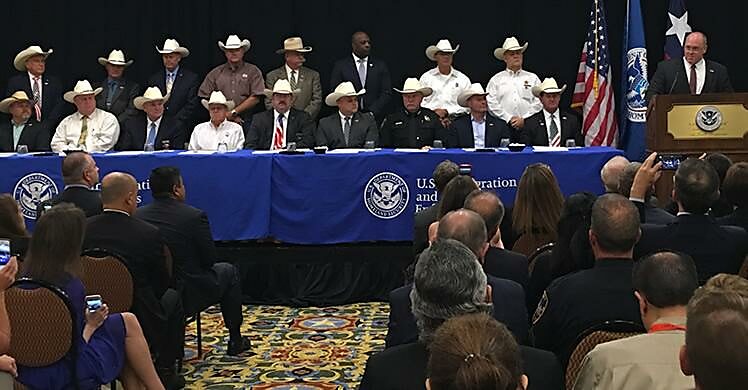 Yesterday Immigration and Customs Enforcement (ICE) announced that eighteen counties in Texas are taking part in the 287(g) program. The program allows police departments to enter into agreements with ICE, thereby permitting their officers to carry out certain federal immigration enforcement functions. The news from Texas is the latest evidence that President Trump’s campaign pledge to “expand and revitalize” 287(g) was a serious commitment, not political bluster. The expansion of 287(g) is a worrying development. The program has been widely criticized for harming police‐​community relationships and prompting racial profiling. It also grows the power of the federal government, which traditionally has not played a major role in state and local law enforcement.

287(g) was, until a few years ago, a program that had three models: Jail, Task Force, and a Jail/​Task Force hybrid model. The Jail agreements allow participating officers to check an individual’s status in a detention facility and issue detainers. Using detainers, officers can hold individuals 48 hours longer than they usually would so that ICE can pick them up. The Task Force model allowed officers to carry out immigration enforcement in the field such as questioning and arresting people suspected of violating immigration law. At the end of 2012 the Obama administration announced that the Task Force 287(g) model would be scrapped, with ICE declaring that other programs “are a more efficient use of resources for focusing on priority cases.”

The Department of Homeland Security (DHS) Office of Inspector General (OIG) raised concerns related to 287(g) in a 2010 report, which stated:

NGOs critical of the 287(g) program have charged that ICE entered into agreements with LEAs that have checkered civil rights records, and that by doing so, ICE has increased the likelihood of racial profiling and other civil rights violations.

Claims of civil rights violations have surfaced in connection with several LEAs participating in the program. Two LEAs currently enrolled in the program were defendants in past racial profiling lawsuits that they settled by agreeing to collect extensive data on their officers’ contacts with the public during traffic stops, and adopt policies to protect the community against future racial profiling. Another jurisdiction is the subject of (1) an ongoing racial profiling lawsuit related to 287(g) program activities; (2) a lawsuit alleging physical abuse of a detained alien; and (3) a DOJ investigation into alleged discriminatory police practices, unconstitutional searches and seizures, and national origin discrimination.

The DHS OIG report was correct to point out the criticism leveled at 287(g). As I’ve noted before, the American Immigration Council found that “287(g) agreements have resulted in widespread racial profiling.” According to the ACLU of Georgia, “The 287(g) program in Cobb and Gwinnett has encouraged and served as a justification for racial profiling and civil and human rights violations by some police officers acting as immigration agents.”

In 2010 Wade Henderson, then‐​President and CEO of The Leadership Conference on Civil and Human Rights, testified before the House Subcommittee on the Constitution, Civil Rights, and Civil Liberties, saying, “the facts show that many local law enforcement agencies repeatedly use 287(g) agreements to stop, frisk, detain, arrest, question, harass, terrorize, and otherwise target individual Latinos and entire Latino communities in a broad way to enforce federal immigration laws, for no reason other than that they appear to be Latino and thus are profiled as potential illegal immigrants.”

But nonprofits are not the only organizations that have criticized the 287(g) program. The Department of Justice’s Civil Rights Division issued two reports on 287(g). One, published in 2011, focused on the Maricopa County (Arizona) Sheriff’s Office (MCSO), the other, published a year later, examined the Alamance County (North Carolina) Sheriff’s Office (ACSO).

For the MCSO report the DOJ had a racial profiling statistics expert examine traffic stops. This expert “found that Latino drivers were between four to nine times more likely to be stopped than similarly situated non‐​Latino drivers.” The same report noted that one Maricopa deputy “was told by his supervisors to expect that he would encounter hostility from people who believed they were being stopped because of their ethnicity.”

In ACSO, the DOJ found a “pattern or practice of unconstitutional policing.” The report also noted the impact ACSO’s policing practices had on Latinos (including citizens) with the sheriff unequivocally encouraging officers to target Latino neighborhoods.

The Commissioner of CBP and the Director of ICE should consider the operational functions and capabilities of the jurisdictions willing to enter into 287(g) agreements and structure such agreements in a manner that employs the most effective enforcement model for that jurisdiction, including the jail enforcement model, task force officer model, or joint jail enforcement‐​task force officer model.

In March, Milwaukee County Sheriff David Clarke signed a 287(g) letter of intent, explicitly stating that he is seeking a hybrid Jail/​Task Force 287(g) agreement with ICE. The president’s own rhetoric, one of his executive orders, and DHS’ statements suggest that Clarke isn’t being overly ambitious in seeking a hybrid agreement.

State and local law enforcement should not be involved in enforcing federal laws. Immigration enforcement is a federal responsibility and, as has been noted, 287(g) has a poor track record when it comes to effective and constitutional policing. The recent expansion of 287(g) is unfortunate, but it’s hardly surprising. This is exactly the kind of immigration policy the president promised us.