A Conspiracy against Obamacare 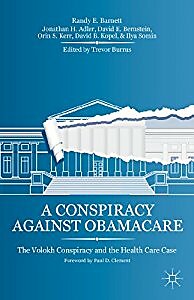 Last week, A Conspiracy Against Obamacare: The Volokh Conspiracy and the Health Care Case was released, of which I am proud to be the editor. The book compiles the discussions and debates about the Affordable Care Act that occurred on the legal blog the Volokh Conspiracy, supplemented with new material. The posts are stitched together into a narrative structure. As a result, you can see the constitutional arguments against the Affordable Care Act develop in real time, from before the law was passed all the way to the Supreme Court.

The book documents a bellwether moment in the history of legal academia: A legal academic blog influencing major Supreme Court litigation. And not just major Supreme Court litigation, but a case that went from a much derided challenge to the biggest and most watched case in decades. As former Solicitor General Paul D. Clement, who expertly argued the case before the Court, kindly wrote in the foreword, "The Constitution had its Federalist Papers, and the challenge to the Affordable Care Act had the Volokh Conspiracy."

The contributors are Randy E. Barnett, Jonathan H. Adler, David E. Bernstein, Orin S. Kerr, David B. Kopel, and Ilya Somin, most of whom are closely associated with Cato in one way or another.

In the introduction, I discuss the constitutional arguments against the law in a more abstract way, as well as describe how the law is destined to fail due to poor design. We are seeing the beginning of those failures now, but I fear we ain't seen nothin' yet.

It was not much commented on at the time--the administration and the law's supporters were too busy spiking the ball--but the Supreme Court's decision will speed up the law's inevitable failures. As I describe in the introduction:

Due to the chief justice’s unpredictable opinion, we are now likely stuck with a law that I fear will seriously damage the health of Americans. What’s more, attempts to further centralize power will not stop at the individual mandate. When the law fails, as I predict it will, it will be said that the federal government lacked enough power to make it work. The chief justice’s opinion gives people a real choice whether to comply with the requirement to purchase insurance or pay a “tax.” Many people will not, and as the price of insurance goes up, more and more people will choose to remain uninsured. This will certainly be called a “loophole.” Similarly, the Court also gave states a choice about whether to comply with the Affordable Care Act’s Medicaid expansion. Another “loophole.” Finally, the states that don’t create health care exchanges will also throw wrenches in the law’s overall scheme. “Loopholes” all around. Having freedom of choice in deeply personal health care decisions, however, is not a loophole.

When the time comes to revisit the Affordable Care Act, those choices by free, sovereign entities (citizens and states) will be blamed for the law’s dysfunctions. To paraphrase philosopher Robert Nozick, liberty disrupts patterns. Free choice inevitably upsets the carefully crafted plans of Washington.

As a solution to the law’s problems, more power will be proposed. A few voices, such as many who write for the Volokh Conspiracy and those of us at the Cato Institute, will strenuously argue that the problem is not a lack of power but a lack of freedom. I am not optimistic, however, that very many entrenched bureaucrats and politicians will locate the problem in the mirror rather than in the freedoms of the American people.

If the Affordable Care Act keeps going south at this rate, we may need to prepare to have that debate sooner than we expected.