With all of the negative effects predicted to occur in response to the ongoing rise in the air’s carbon dioxide (CO2) concentration—a result of burning fossil fuels to produce energy—it is only natural to want to see what has been happening to our Earth’s many ecosystems as the atmospheric carbon dioxide load has risen. (Its atmospheric concentration has risen from around 280 parts per million to nearly 400 ppm, an increase of about 43 percent).

A new study by the University of California’s Christopher Dolanc and colleagues does just that, for the diverse Sierra Nevada forests of California.

Dolanc and his colleagues analyzed two periods: historic measurements between 1929 and 1936, and modern data from 2001 through 2010.  And when we said "diverse," we meant it.  They “classified 4,321 historical plots and 1,000 modern plots into nine broad groups of vegetation types that are widely used by land managers and researchers in the region.” This is what grad students are for!

They compared tree density and composition between the two periods, within and between the nine types of forest. The results shown in Figure 1 below. 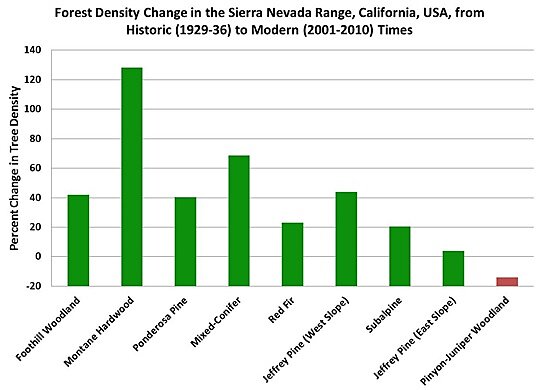 As you can see, they found that tree density was significantly higher (in eight of nine forest types) in the current era of high carbon dioxide,  when compared to the early period when concentrations were around 306 ppm, only about 10 percent above the pre-industrial background.

In addition, by looking across forest types, they find that density was higher in all western slope forests. Note to the numbers people: a 128 percent increase in tree density, as seen for montane hardwood forests, is a huge greening.

With respect to why there was a significant increase in tree density over the past several decades, Dolanc offers that the changes in the density and composition of lower-elevation forests are consistent with fire suppression; but that the density increases in high-elevation vegetation types (subalpine forests generally don’t burn) are “more likely to be caused by changing climate.”

Some of this climate change may be due to the CO2 emitted to the atmosphere by the burning of fossil fuels over the past century, although an inspection of regional climate data shows most of the Sierra warming occurred from 1910 through the early 1930s, long before the major emissions. Also, recent research has tied 20th century temperature fluctuations in northern California, and much of the Pacific Northwest, to naturally occurring atmospheric/ocean circulation patterns over the Pacific Ocean.

Let’s be charitable and say that the Sierra vegetation is responding favorably to all kinds of climate change, whether induced by humans or natural variability. At a minimum, the observations of this study do not support fears of widespread forest decline in the face of rising temperatures and atmospheric CO2. It is noteworthy that this occurs over the substantial diversity of ecosystems that occurs along this altitudinal gradient.

Another factor not considered in this report is the direct fertilization effect of carbon dioxide, a well-known phenomenon documented in thousands of laboratory and field experiments around the world. That’s a different subject altogether. But, from this study, it is apparent that whatever subtle changes in Sierra Nevada climate are occurring, we are witnessing a California Greening.