Poof, it was gone.

Just like that, the human fingerprints on a century-long warming trend in Northwestern United States were erased and replaced instead by the telltale signs of natural variability.

That is the conclusion of new research published last week by a pair of scientists from the University of Washington. James Johnstone and Nathan Mantua published their paper titled “Atmospheric controls on northeast Pacific temperature variability and change 1900-2012” in the Proceeding of the National Academy of Sciences (PNAS).

So as not to be accused of putting words in their mouth, here, in full, are the contents of a box labeled “Significance” from their paper:

Northeast Pacific coastal warming since 1900 is often ascribed to anthropogenic greenhouse forcing, whereas multidecadal temperature changes are widely interpreted in the framework of the Pacific Decadal Oscillation (PDO), which responds to regional atmospheric dynamics. This study uses several independent data sources to demonstrate that century-long warming around the northeast Pacific margins, like multidecadal variability, can be primarily attributed to changes in atmospheric circulation. It presents a significant reinterpretation of the region’s recent climate change origins, showing that atmospheric conditions have changed substantially over the last century, that these changes are not likely related to historical anthropogenic and natural radiative forcing, and that dynamical mechanisms of interannual and multidecadal temperature variability can also apply to observed century-long trends.

Translation: Natural variability in the atmosphere/ocean dynamics of the northern Pacific Ocean rather than human-caused global warming can largely explain the century-long rise in temperature in the Pacific Northwest.

And the authors have the figures to prove it.

The left-hand panel of Figure 1 (below) illustrates the observed trends over the period 1900–2012 for weather observing stations in the contiguous United States located west of longitude 116°W—this includes all of Washington and Oregon, most of California, and parts of Idaho and Nevada. Notice all the red, upward-pointing arrows indicating an overall temperature rise since 1900 across the entire region. The right-hand panel shows the trend in the same stations once the natural variability identified by Johnstone and Mantua has been removed.  If global warming were having an influence, it would be evident in both panels—more strongly so in the right-hand one.  Instead, in that panel, we have a mixed bag of up and down trends of very low magnitude—no strong signal of any kind, no sign of global warming. 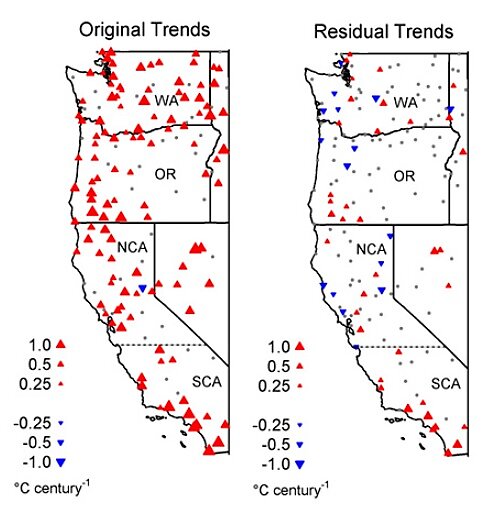 Now, we’ll be among the first to admit that PNAS does not have the reputation of publishing the most robust of studies, but, still, this result is intriguing. We hope that it will be verified by publication in a more rigorous peer-reviewed journal in the near future.

In the meantime, we can only wonder what the authors of the recent U.S. National Climate Assessment (NCA) are thinking.  After all, they have an entire chapter of their new report (a report basically crafted to support President Obama’s Climate Action Plan) dedicated to present and future climate change in the Northwest. While the NCA authors coyly admit that the region’s “climate trends include contributions from both human influences (chiefly heat-trapping gas emissions) and natural climate variability” they are quick to add “[t]hey are also consistent with expected changes due to human activities.”

Hmm. While the observed trends may be “consistent with” the NCA authors’ “expected changes due to human activities,” in actuality they are, in fact, not caused by human activities.

This is a good lesson that “consistent with” does not equate with “a result of.”  Which means that all the other regional changes in the Northwest noted in the NCA—wildfires, insect outbreaks, changes in the timing of stream flow, etc.—are also largely a result of influences other than human-caused climate change.  And, it means that all the projections of future climate changes forwarded by the NCA are also nonrobust.

Somehow, we doubt a correction will be forthcoming.

After all, the NCA and the president are not particularly interested in what the science actually says about climate change and its causes and effects, but rather how it can be molded to support the climate change activism that will shape the legacy of the current administration. Inconvenient truths are too readily brushed aside.