An overwhelming majority (82%) of Americans agree that "it would be hard to ban hate speech because people can’t agree what speech is hateful," the Cato 2017 Free Speech and Tolerance Survey finds. Seventeen percent (17%) disagree. Majorities across partisan and demographic groups alike agree that hate speech is hard to define and thus may be hard to regulate. 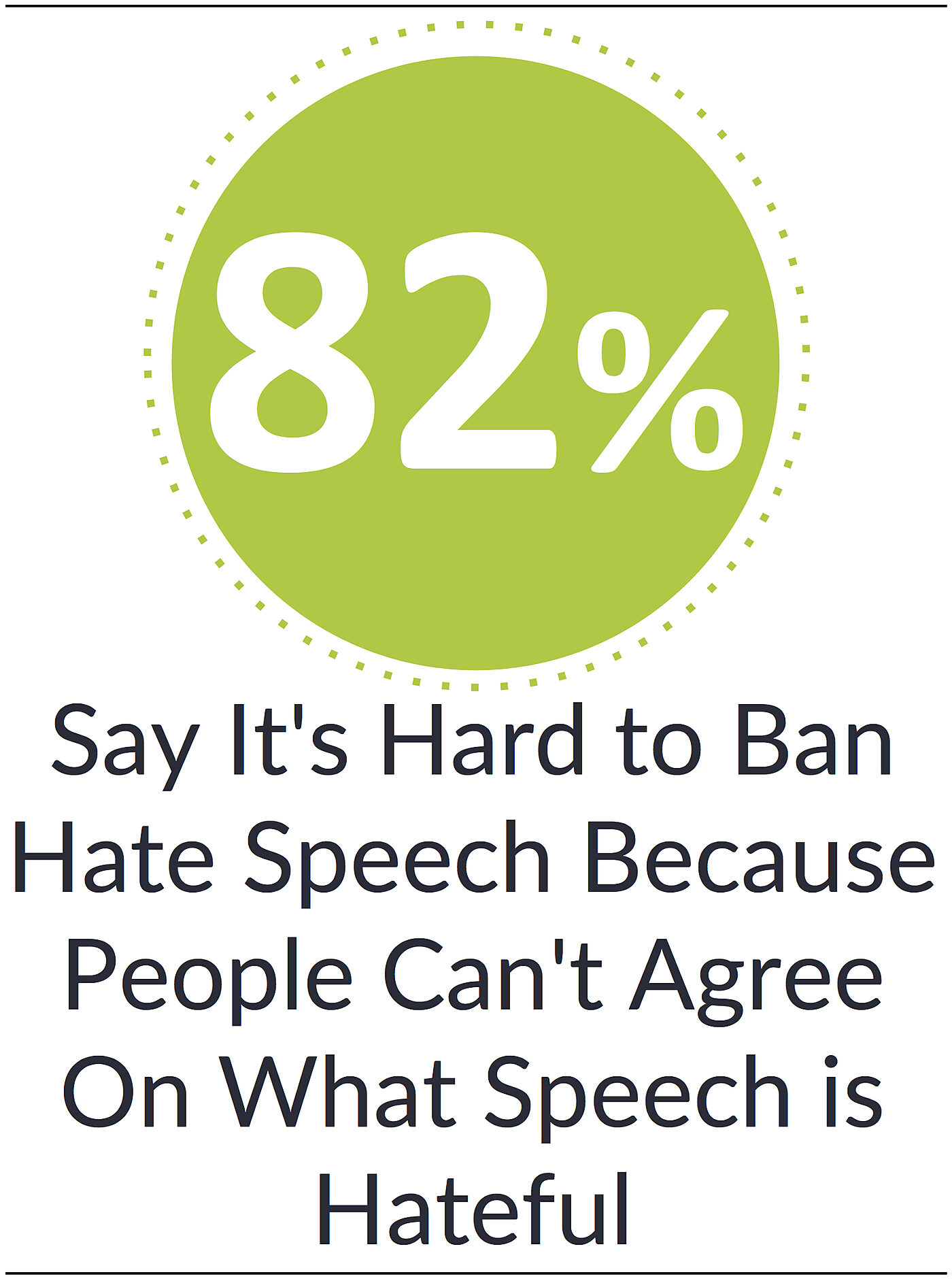 How Do Americans Define Hate Speech?

When presented with specific statements and ideas, Americans can’t agree on what speech is hateful, offensive, or simply a political opinion

Besides slurs and biological racism, Americans are strikingly at odds over what speech and ideas constitute hate.[1] For instance, a majority of Democrats (52%) believe saying that transgender people have a mental disorder is hate speech. Only 17% of Republicans agree. On the other hand, 42% of Republicans believe it’s hateful to say that the police are racist, while only 19% of Democrats agree. 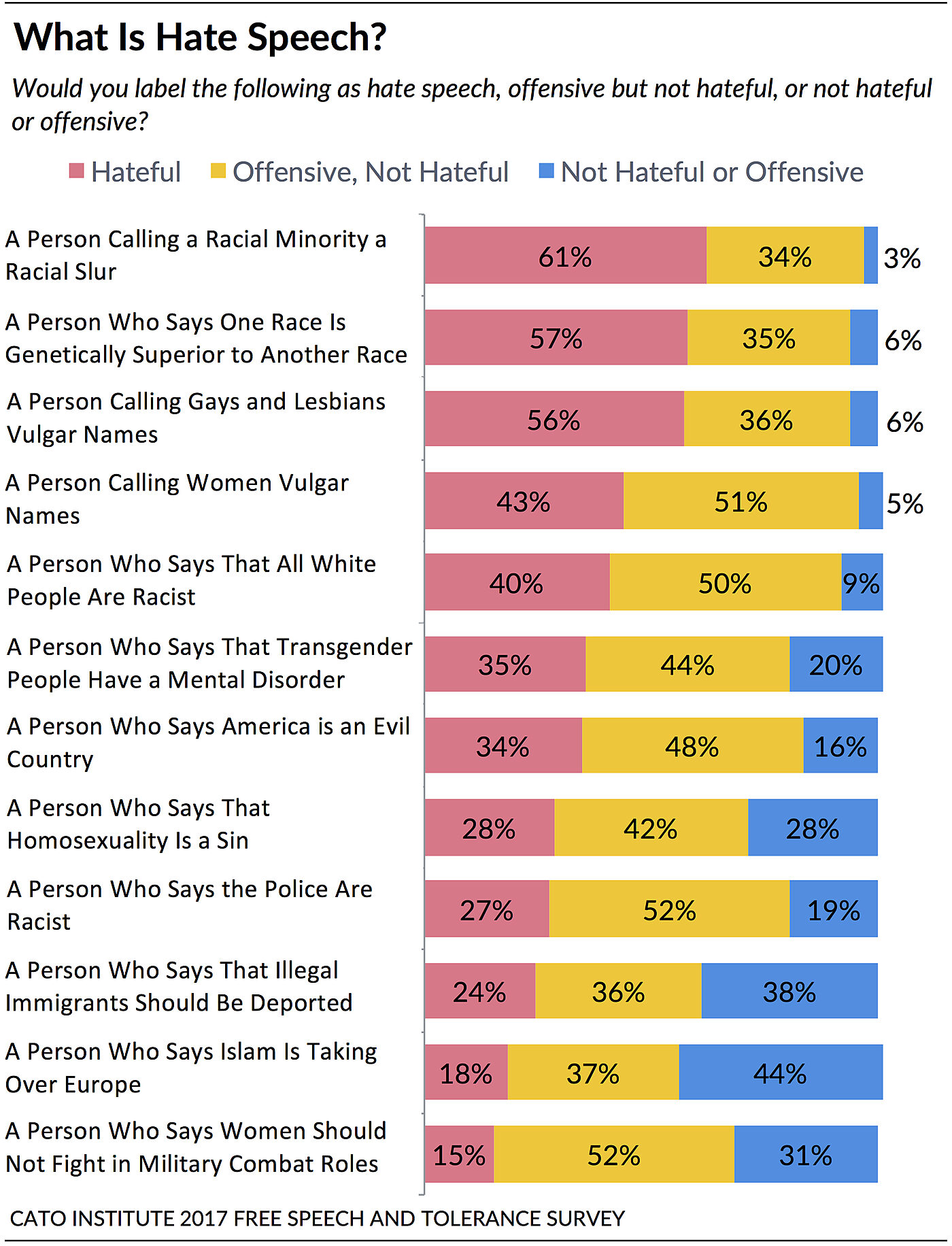 Among all Americans, majorities agree that calling a racial minority a racial slur (61%), saying one race is genetically superior to another (57%), or calling gays and lesbians vulgar names (56%) is not just offensive, but is hate speech. Interestingly a majority do not think calling a woman a vulgar name is hateful (43%), but most would say it’s offensive (51%). Less than half believe it’s hateful to say that all white people are racist (40%), transgender people have a mental disorder (35%), America is an evil country (34%), homosexuality is a sin (28%), the police are racist (27%), or illegal immigrants should be deported (24%). Less than a fifth believe it’s hateful to say Islam is taking over Europe (18%) or that women should not fight in military combat roles (15%).

Liberals and conservatives significantly diverge over what speech they define as hateful, offensive, or simply an opinion.

Majorities of liberals say that slurs against racial minorities (81%) and LGBT people (73%), saying that one race is genetically superior to others (75%), or saying transgender people have a mental disorder (59%) are hateful. Strikingly, majorities of conservatives don’t think any of these ideas are “hateful” although most consider them “offensive” or hateful.[2] In fact, conservatives are about 40 points less likely than liberals to think that saying transgender people have a mental disorder (17% vs. 59%) or saying racial slurs (43% vs. 81%) are hateful. While strong majorities of conservatives agree these are at least offensive or hateful, they are less likely to equate these phrases and ideas with hate specifically. 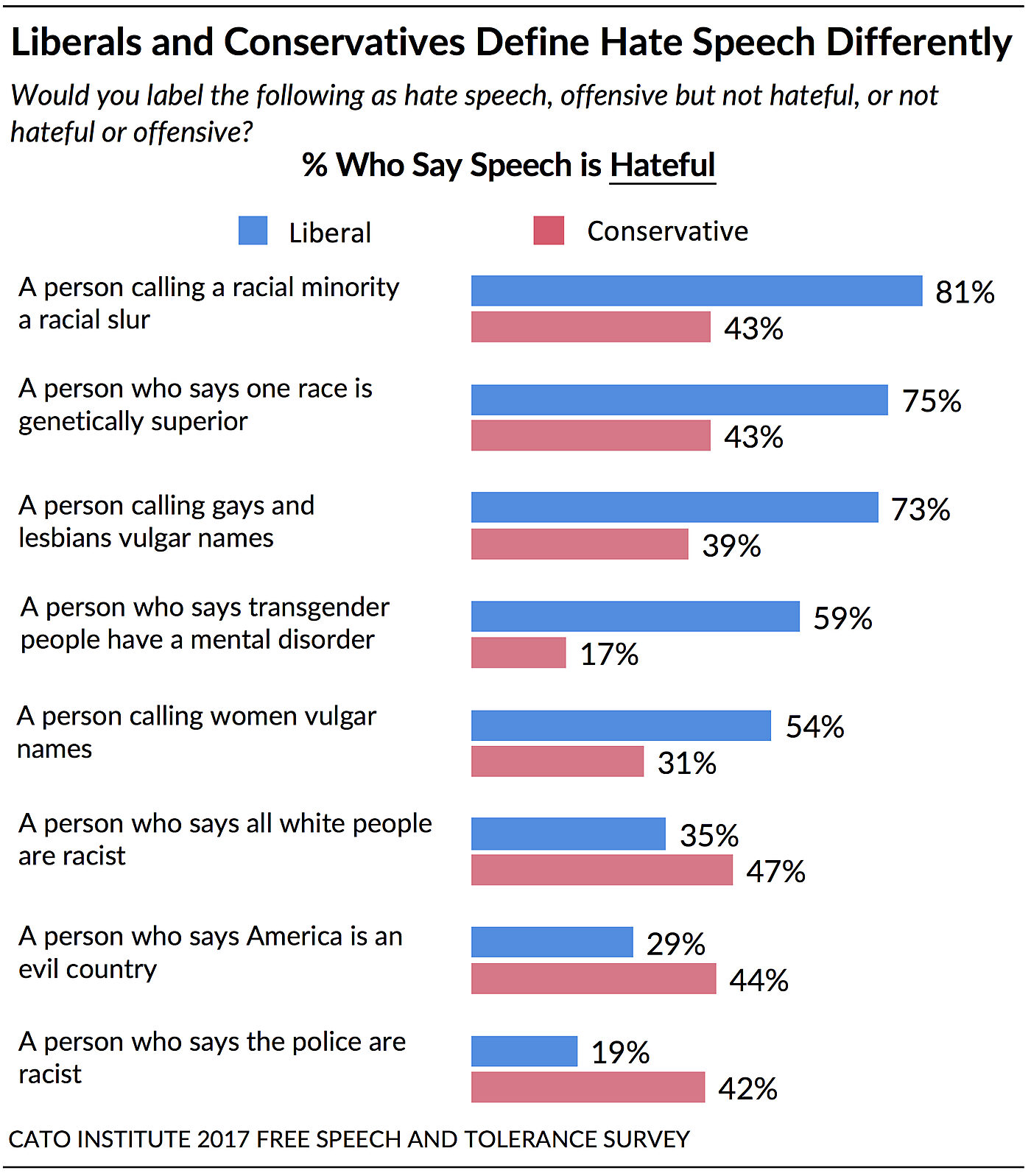 Liberals are more likely than conservatives to view a variety of political opinions and speech as either offensive or hateful. 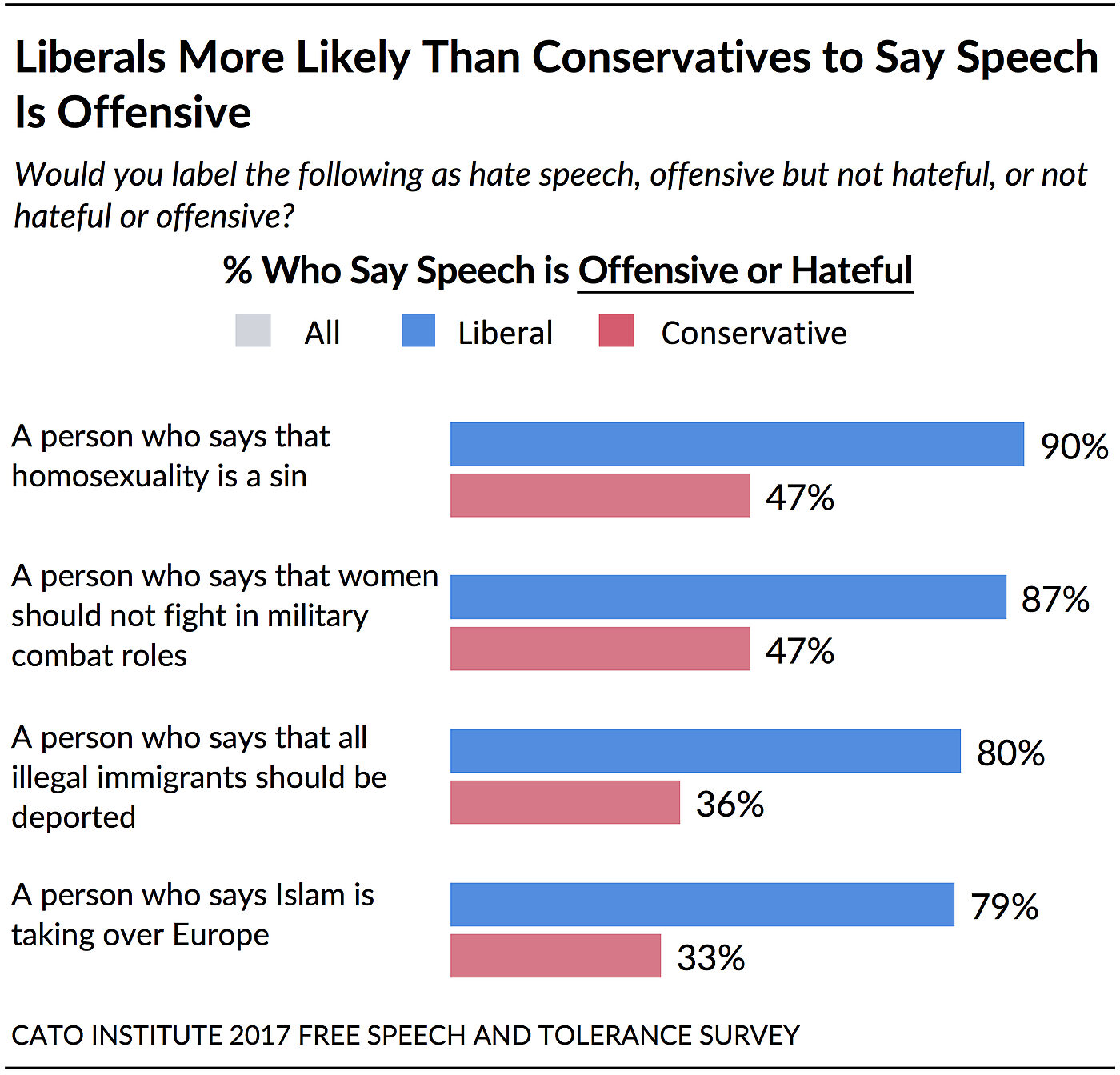 Liberals are more than 40 points more likely than conservatives to think it is offensive or hateful for a person to say that homosexuality is a sin (90% vs. 47%), women shouldn’t fight in military combat roles (87% vs. 47%), illegal immigrants should be deported (80% vs. 36%), or Islam is taking over Europe (79% vs. 33%). Not even a majority of conservatives find these statements to be offensive or hateful.

Notice that two of these, women fighting in combat roles and deporting illegal immigrants, are policy positions that a substantial number of Americans hold. For instance, a Quinnipiac survey found 22% of Americans believe unauthorized immigrants should be “required to leave” the United States. A Fox News poll found 26% don’t think women should fight in military combat roles. Furthermore, the perception that the police allow racial bias to impact their jobs is also a view held by about a quarter (26%) of Americans, according to a Quinnipiac survey.

Yet, to merely express these as political positions or perceptions would also be viewed as highly offensive to a large share of the population.

Furthermore, what may be a policy preference or an assessment of public policy for one person, such as deporting unauthorized immigrants or perceiving a racial bias in policing, may be highly offensive and hateful to another. Thus, attempts to regulate offensive speech would have the effect of shutting down dialogue and erect barriers to public policy debate.


The Cato Institute 2017 Free Speech and Tolerance Survey was designed and conducted by the Cato Institute in collaboration with YouGov. YouGov collected responses online August 15–23, 2017 from a national sample of 2,300 Americans 18 years of age and older. The margin of error for the survey is +/- 3.00 percentage points at the 95% level of confidence.


[1] In this report, biological racism refers to a belief that some races are genetically superior or inferior to one another. 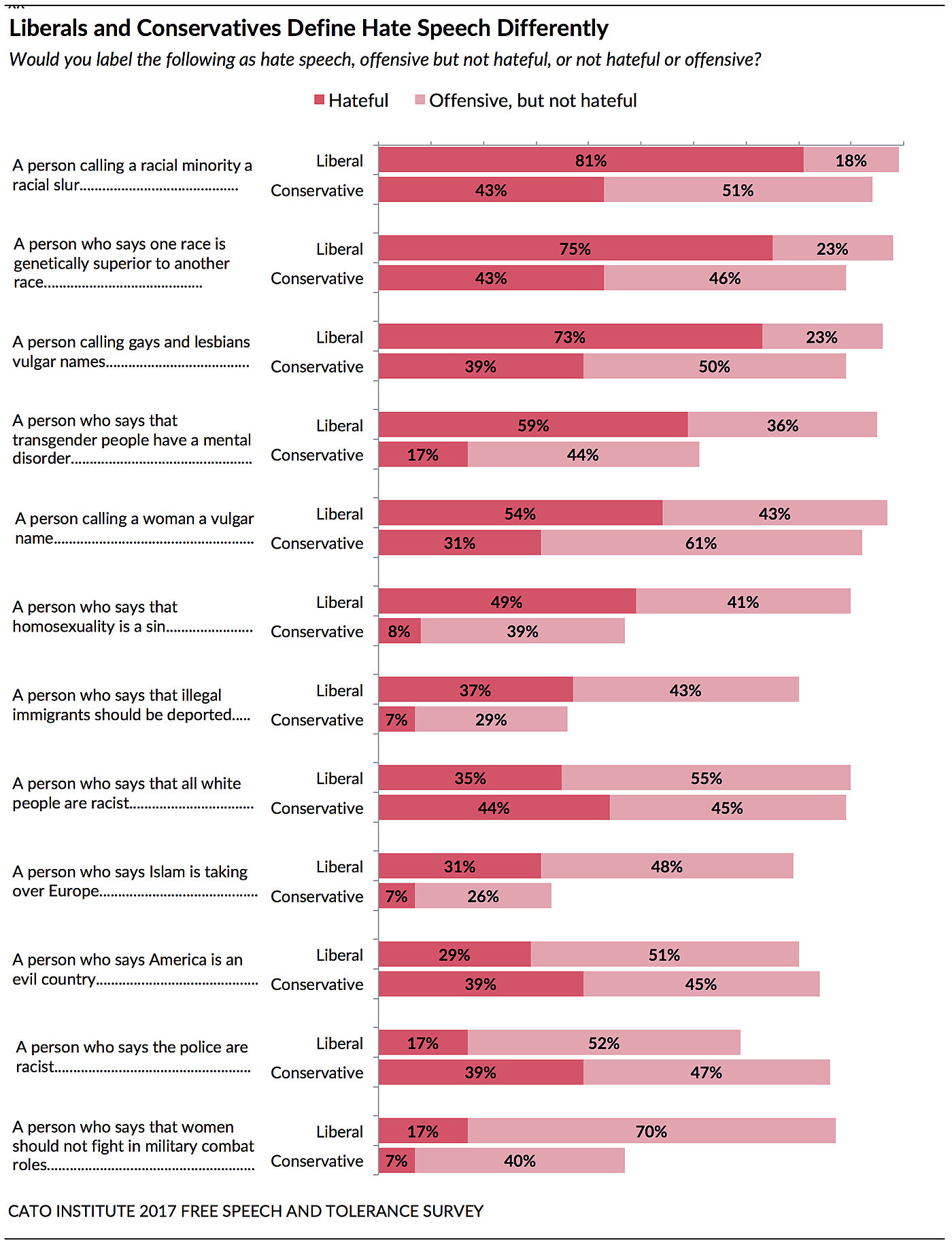