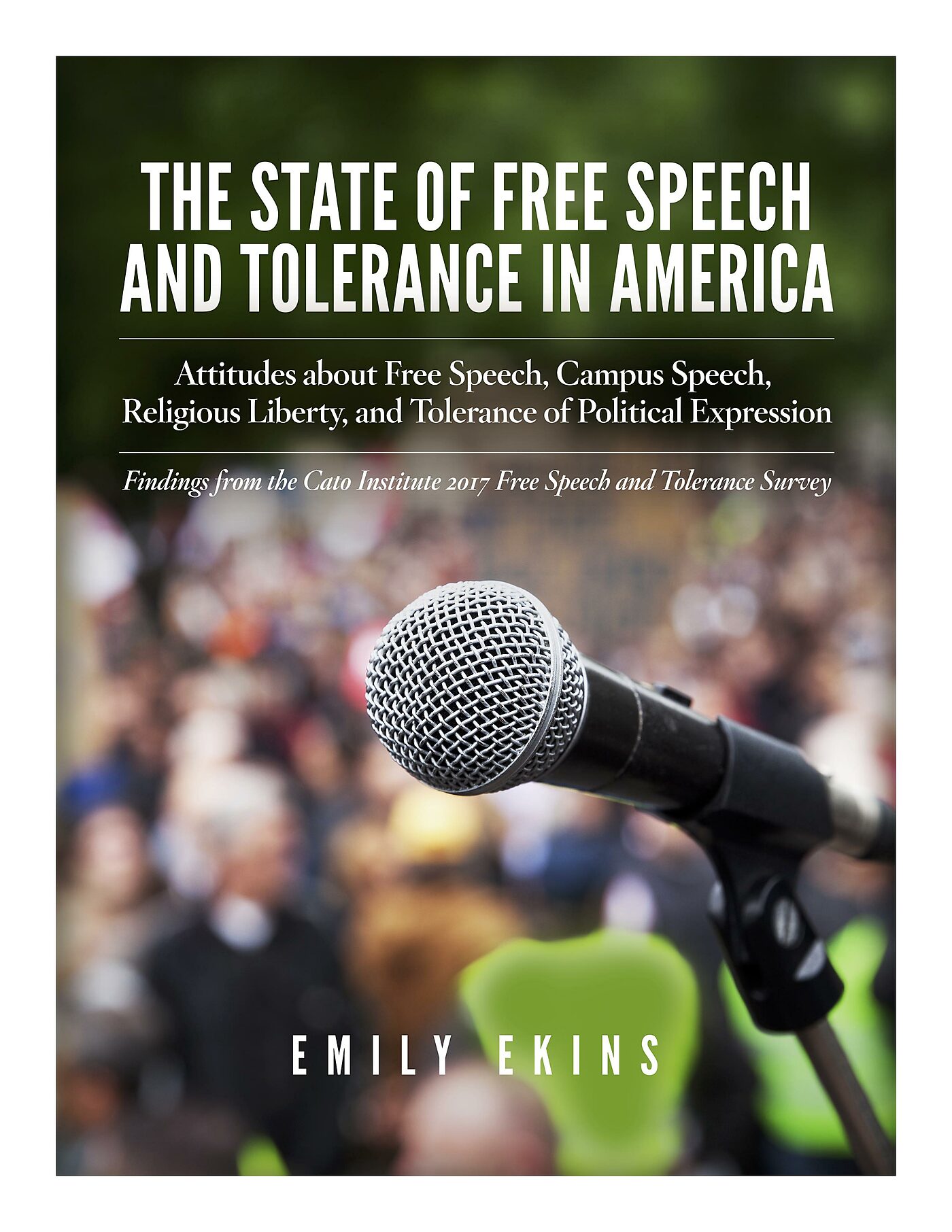 Early in his presidential tenure, Donald Trump tweeted that the national news media is “fake news” and that it is an enemy of the American people. Nearly two-thirds (64%) of Americans do not agree with President Trump that journalists today are an “enemy of the American people,” finds the Cato 2017 Free Speech and Tolerance Survey. Thirty-five percent (35%) side with the president.

However, nearly two-thirds (63%) of Republicans agree that journalists are an enemy of the American people. Such a charge is highly polarizing: 89% of Democrats and 61% of independents do not think journalists are the enemy.

While Republicans stand out with their negative view of the media, Democrats have uniquely positive evaluations of it. A slim majority (52%) of Democrats say the national news media is doing a good or even an excellent job “holding government accountable.” In contrast, only 24% of independents and 16% of Republicans agree. 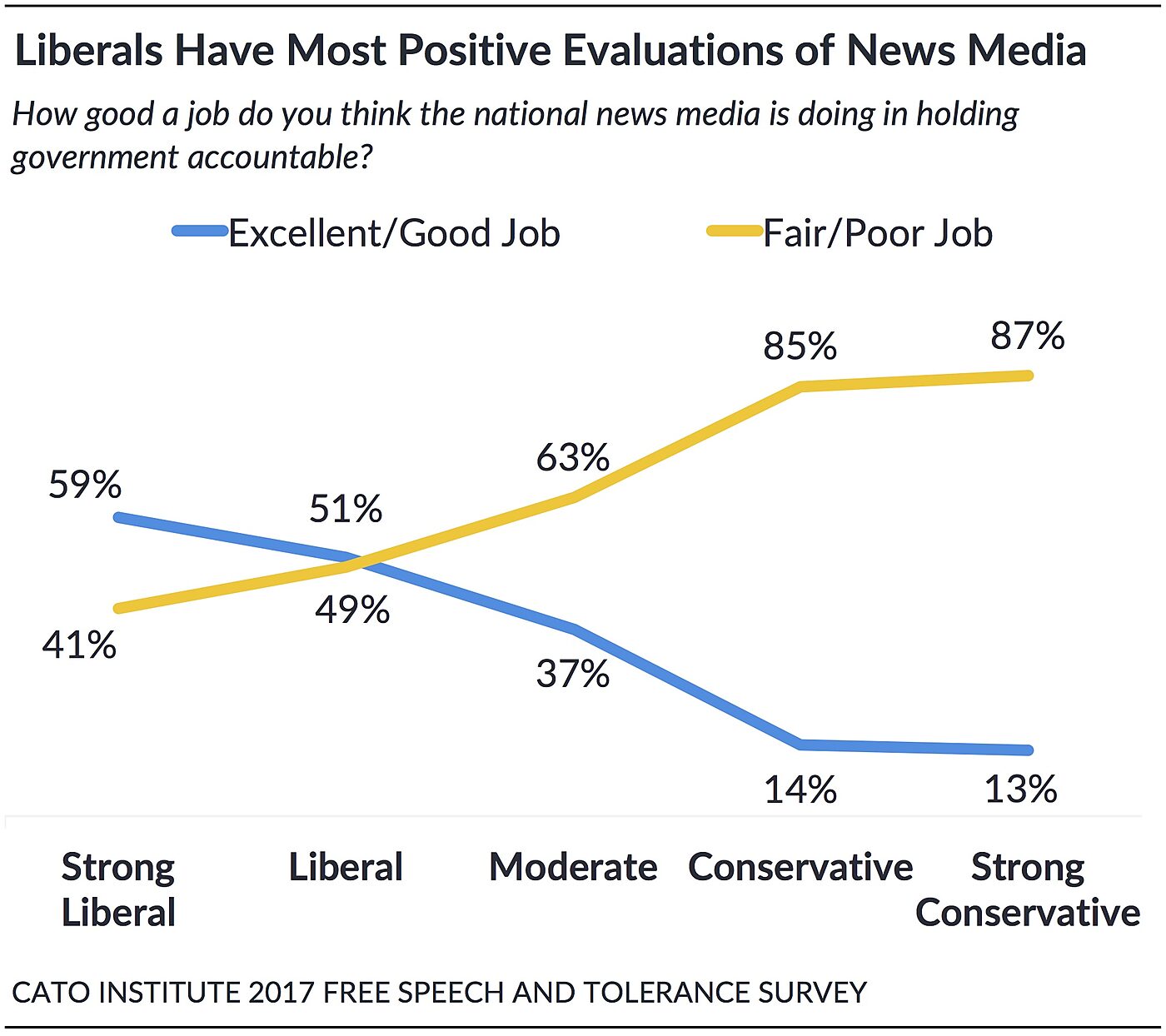 Among all Americans, only a third (33%) agree the news media is doing its job holding government accountable. More than two-thirds (67%) say it is not.

The more a person identifies as liberal, the more likely they are to say the media is doing a good job. Among strong liberals, 59% say the national news media is doing a good or excellent job holding government accountable. In contrast, 87% of strong conservatives say it’s doing a poor or fair job.

Why do Republicans lack confidence in the national news media while Democrats view it positively? Perhaps because most Americans perceive a liberal bias among most major news organizations.[1] 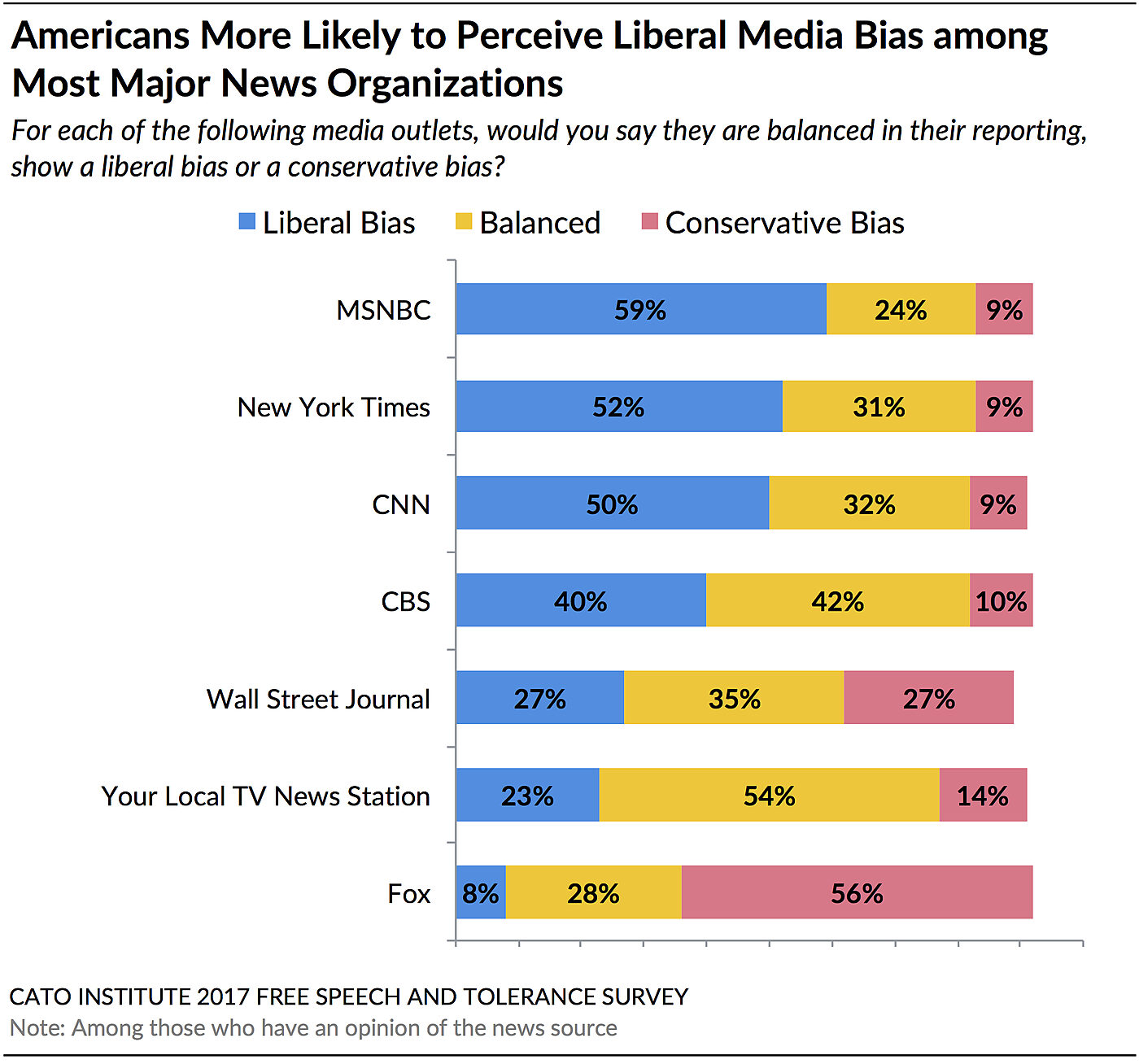 Fifty-two percent (52%) of respondents say that the New York Times allows a liberal bias to color its reporting. Fifty percent (50%) feel CNN also succumbs to a liberal media bias. Fifty-nine percent (59%) say that MSNBC also has a liberal bias. Of all the top news organizations included on the survey, only Fox News was perceived to have a conservative bias (56%).

Americans feel their local news stations and broadcast news channels do a better job than cable news in providing balanced reporting. A majority (54%) say their local news station is balanced, without a liberal or a conservative bias. A plurality (42%) also believe that CBS is balanced. Nevertheless, respondents were four times as likely to say CBS has a liberal bias than a conservative bias (40% vs. 10%), and almost twice as likely to say their local station has a liberal bias (23% vs. 14%).

Majorities of Democrats believe most major news organizations are balanced in their reporting, including CBS (72%), CNN (55%), the New York Times (55%), as well as their local news station (67%). A plurality (44%) also believe the Wall Street Journal is balanced. The two exceptions are that a plurality (47%) believe MSNBC has a liberal bias (37% believe it’s unbiased) and a strong majority (71%) say Fox has a conservative bias.

Republicans, on the other hand, see things differently. Overwhelming majorities believe liberal bias colors reporting at the New York Times (80%), CNN (81%), CBS (73%), and MSNBC (80%). A plurality also feel the Wall Street Journal (48%) has a liberal tilt. Only when evaluating their local TV news station do most Republicans—but not a majority—perceive balanced reporting (42%). Similar to Democrats’ perceptions of MSNBC, a plurality of Republicans (44%) believe Fox News has a conservative bias; 41% believe it provides unbiased reporting. 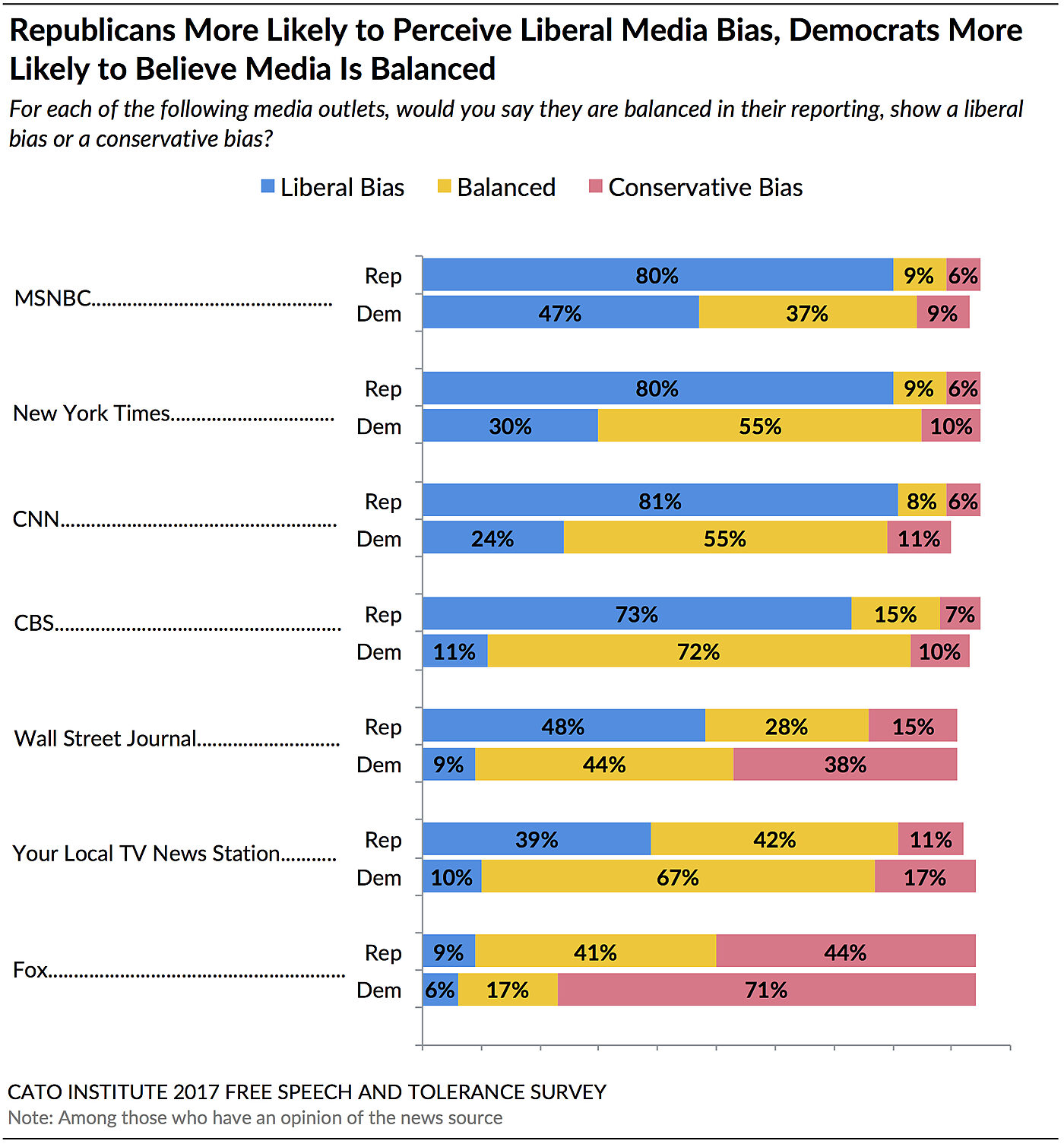 Despite Democrats and Republicans’ different perceptions of news media, they agree that government should not shut down news stories—even if biased or inaccurate.

Strong majorities of Republicans (63%), independents (71%), and Democrats (76%) agree that “government should not be able to stop a news media outlet from publishing a story that government officials say is biased or inaccurate.” 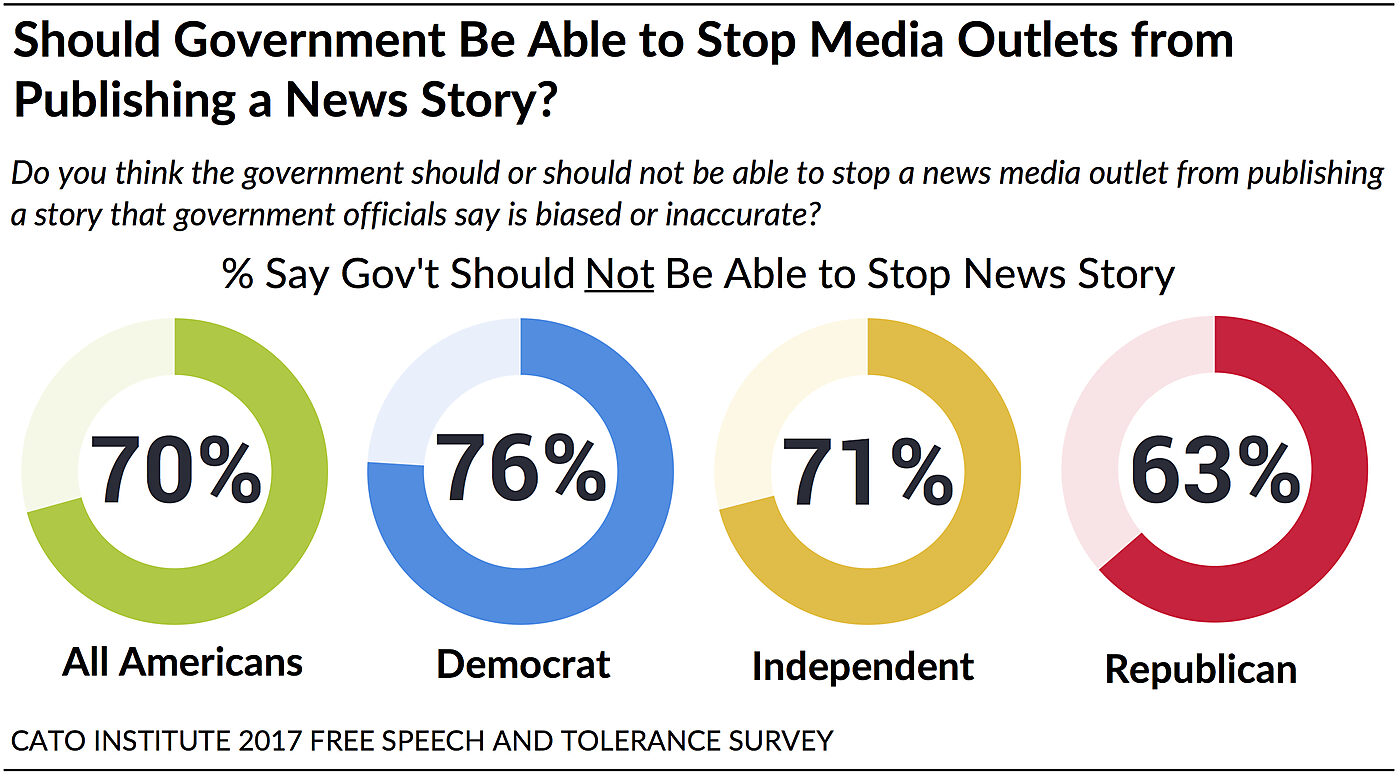 Among all Americans, 70% say government should not shut down news stories regardless of whether officials think the story is inaccurate. A little more than a quarter (29%) think government should have the authority to stifle stories authorities say are inaccurate or biased.

The Cato Institute 2017 Free Speech and Tolerance Survey was designed and conducted by the Cato Institute in collaboration with YouGov. YouGov collected responses online August 15–23, 2017 from a national sample of 2,300 Americans 18 years of age and older. The margin of error for the survey is +/- 3.00 percentage points at the 95% level of confidence.