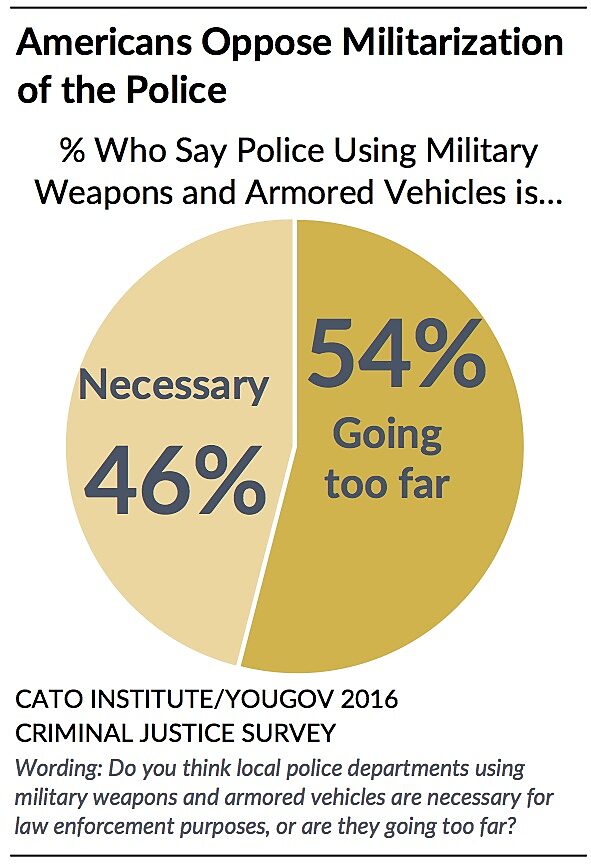 A majority of Americans (54%) say that police departments using military weapons and armored vehicles “goes too far.” Another 46% believe that police using military equipment is “necessary for law enforcement purposes,” according to a new Cato Institute/YouGov survey of 2,000 Americans.

Although Americans of different races and ethnicities vary widely in their perceptions of the police, majorities of whites (53%), blacks (58%), and Latinos (51%) all believe police using military equipment is excessive. 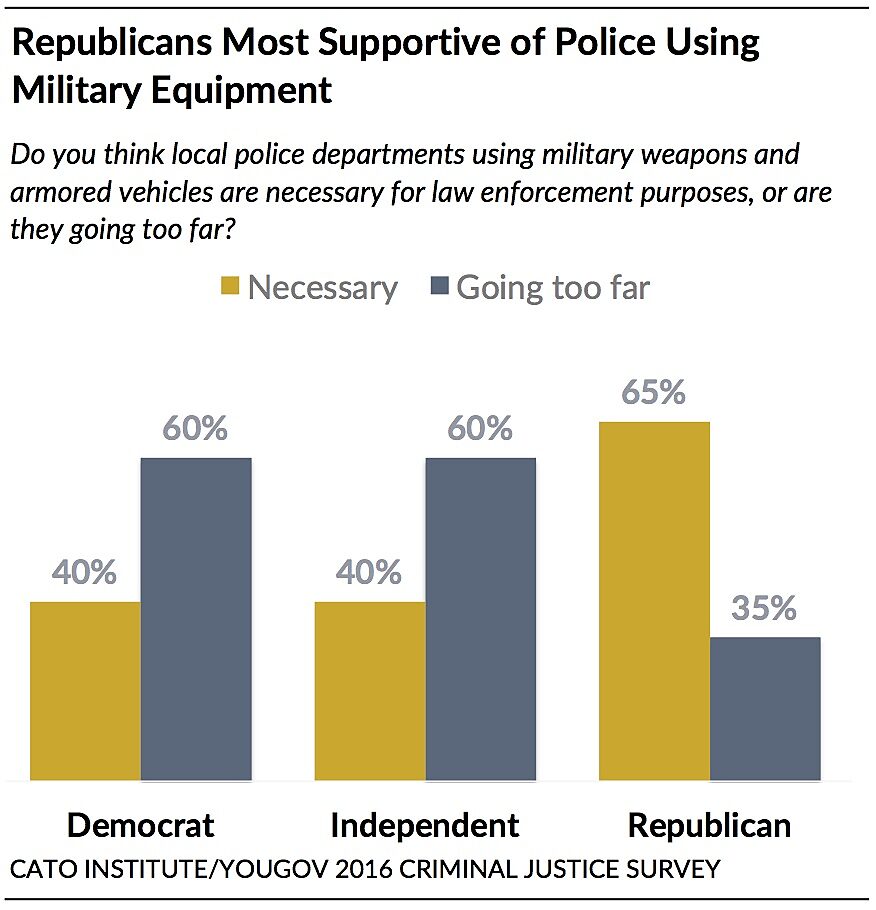 Police militarization divides partisans. Sixty percent (60%) of both Democrats and independents think that police using military equipment “goes too far” and 40% think it is necessary. In stark contrast, 65% of Republicans think police need to use military equipment while 35% think it’s unnecessary. Support for police militarization comes disproportionately from the “strong Republican” wing of the GOP with 71% in support, compared to 57% who agree among “not very strong” Republicans. 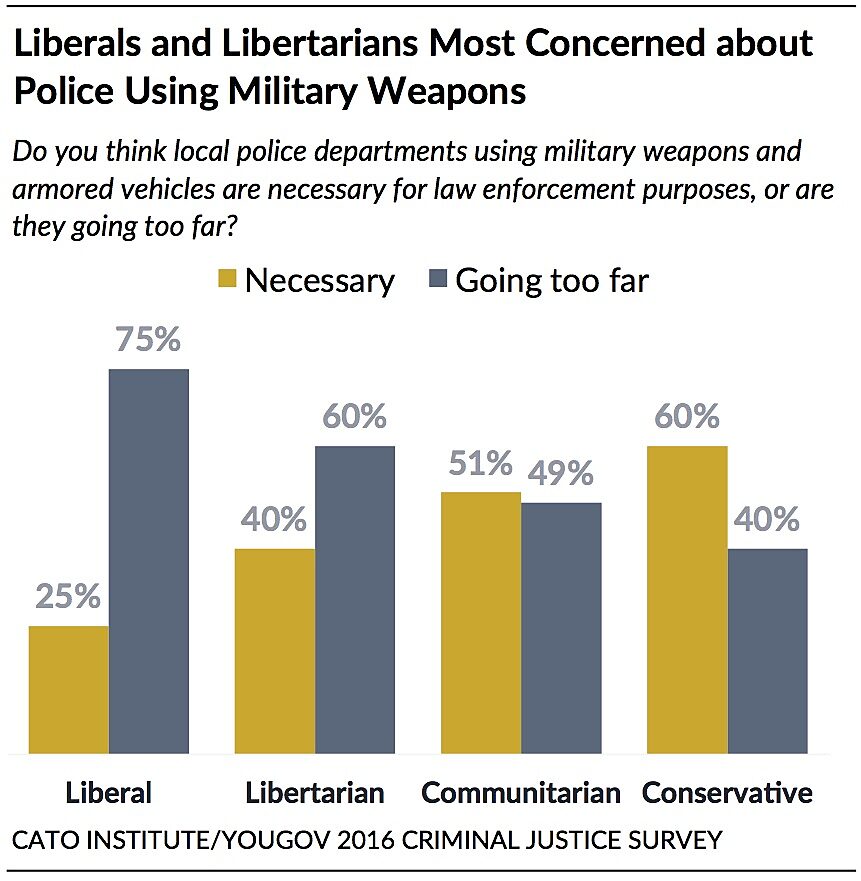 Opposition to police militarization brings together Libertarians and Liberals, groups identified according to our ideological typology. Fully 75% of liberals and 60% of libertarians think that police using military equipment "goes too far." In contrast, Communitarians (social conservatives who support the welfare state) and Conservatives come together in their support for police using military equipment: 60% of Conservatives and 51% of Communitarians think it’s necessary.

Working class Americans, across all races and ethnicities, are more supportive (51%) of police using military weapons and armored vehicles than Americans with college degrees (42%). Instead, a majority (58%) of college graduates thinks it’s excessive.

Americans under 65 oppose militarization by a margin of 57% to 43%. However, seniors (65 and up) stand out with their comfort with police militarization: 61% believe it is necessary and 39% think it’s not. 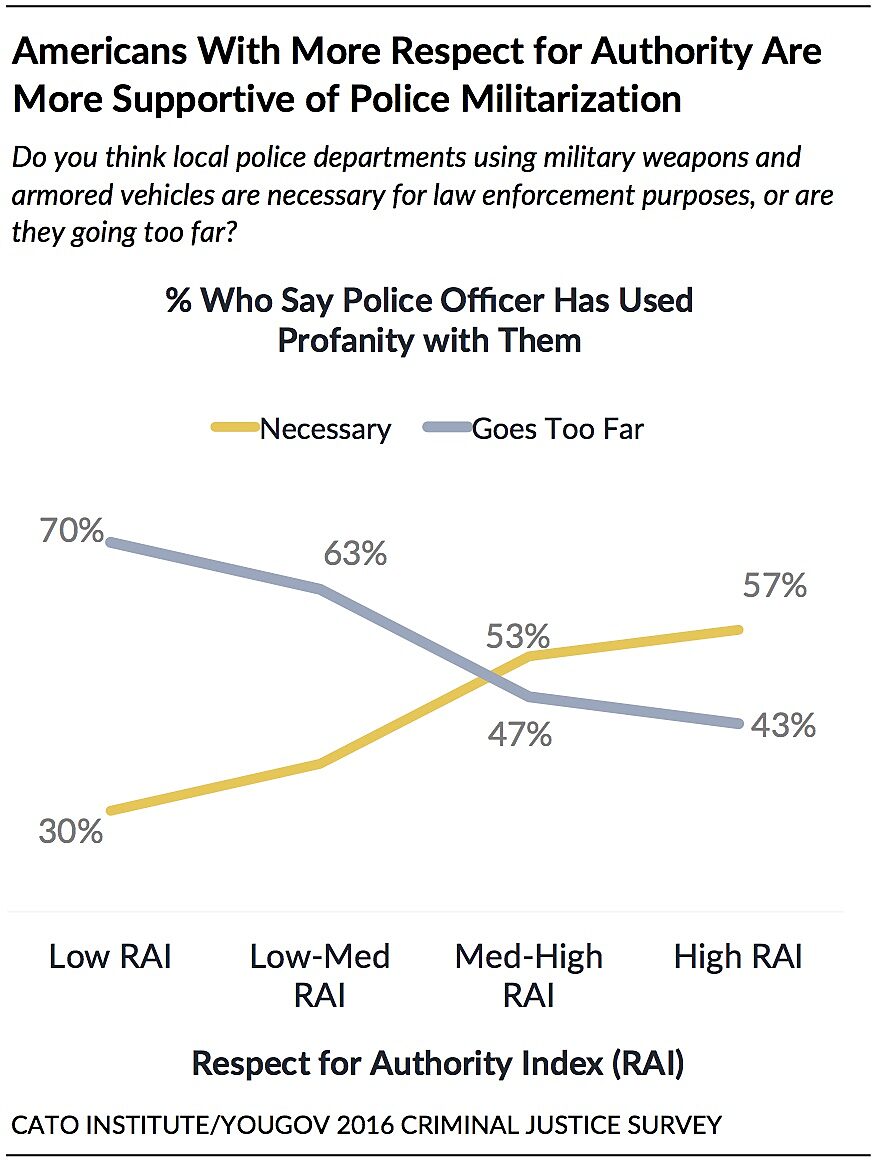 We find that people disposed toward authority figures are most supportive of police militarization. Americans who score high (57%) on our Respect for Authority Index (RAI) are significantly more likely than those who score low (30%) to believe police need military weapons to do their jobs. Americans with greater skepticism towards authority are far more likely to believe military weapons are excessive (70%).

Notably, Americans who live in cities are no more likely than Americans living in suburban or rural areas to think it’s a good idea for police to use military equipment. Support also does not vary considerably by gender, income, or age for those under 55.

In sum, support for police militarization is less contingent on one's environment, and more related to people’s dispositions toward authority—and by extension their political ideology. Americans with more respect for authority figures are more likely to believe that police (a trusted authority figure) would only use military equipment if it were necessary. 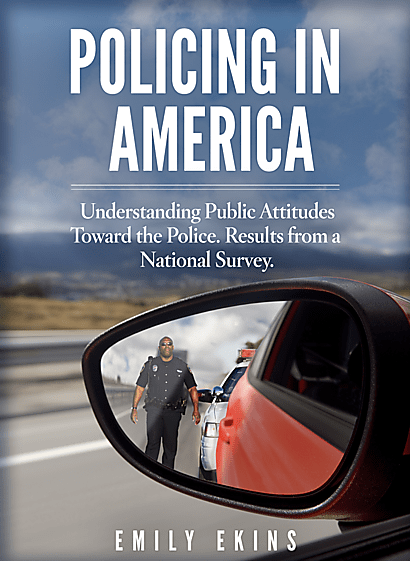