“We have to give power back to the police,” Donald Trump proclaimed during his campaign, and earlier this year he delivered … or so he thinks. The early weeks of Trump’s presidency indeed match his campaign rhetoric, replete with an executive order seeking to make assault against police officers a federal crime.

Americans are understandably divided by Trump’s “law and order” approach to policing reform. Research suggests Americans’ reactions to Trump’s policies will be shaped both by their own experiences with police and by their moral predispositions.

It starts with race. Anyone discussing policing in the U.S. needs to grapple with the fact that there is a wide racial divide in perception of police performance.

A Cato Institute surveyfound a strikingly high number — 73% — of African Americans and 54% of Hispanics believe that police are “too quick” to resort to deadly force with citizens. Only 35% of whites agree. Similarly, African Americans and Hispanics are also 20 to 30 points less likely than whites to believe that their local police treat all racial groups equally or are held accountable for misconduct.

Different personal and vicarious experiences with the police undergird this divide.

Anyone discussing policing in the U.S. needs to grapple with the fact that there is a wide racial divide in perception of police performance.

Thesurvey found that African Americans are nearly twice as likely as white Americans to report police swearing at them or to know someone physically mistreated by police.

Interestingly enough, the study alsofound that African Americans report being stopped by police disproportionately more than whites as their incomes rise. This suggests that police are disproportionately scrutinizing black drivers in nice cars or in nice neighborhoods. Overall, higher-income African Americans report being stopped about 1.5 times more frequently than higher-income white Americans (and lower-income black and white Americans as well).

But what explains how the majority of Americans evaluate the police, given that most Americans haven't had negative interactions with them? For instance, despite Republicans and Democrats having access to the same video footage of police shootings in previous years, survey data show that they've reached dramatically different conclusions.

Strong majorities of Republicans believe that police only use deadly force when necessary (80%), are impartial (78%) and courteous (74%), and are held accountable for their actions (76%). This stands in contrast to Democrats, among whom a majority believe police are too quick to use lethal force (63%), fail to be impartial (60%), and aren't held accountable (59%). Race can't explain this pattern: It persists among white Republicans and white Democrats as well.

So why do Democrats tend to believe that policing suffers from systemic problems, while Republicans think problems are isolated or confined to "bad apples"? Social psychology may offer some answers.

Social psychologists have found that moral judgments strongly affect evaluations of controversial facts. Before we've even had a chance to sort through the empirical evidence, our minds tend to make rapid effortless moral judgments. We then engage in post-hoc reasoning to defend our conclusions.

The Morality of the Issue

While each of us shares the same moral instincts to one degree or another, some moral commitments are more salient than others to liberals or conservatives.

In contrast, liberals are inclined to be more skeptical of authority figures and to empathize more particularly with vulnerable groups who report disparate treatment from the police, such as African Americans. This generalpropensity to empathize is a significant predictor of white Democrats' belief that the justice system is racially biased.

Naturally, there are exceptions. Not every Democrat is skeptical of the police, and not every Republican is deferential to authority. Nevertheless, data clearly show us a clear divide when it comes to how partisans think about authority.

With that in mind, policing reform is possible, but it's hard. The U.S. is a vast and diverse country with about 18,000 law enforcement agencies. Widespread and comprehensive reform in such an environment is difficult. Yet there are areas of emerging consensus, with clear majorities across partisan and racial groups supporting body cameras and independent agencies investigating police misconduct.

When tackling policing reform, Trump should put himself in other people's shoes. There are many law-abiding Americans who shudder when they hear about giving "power back to the police," and Trump would be well served to understand why. 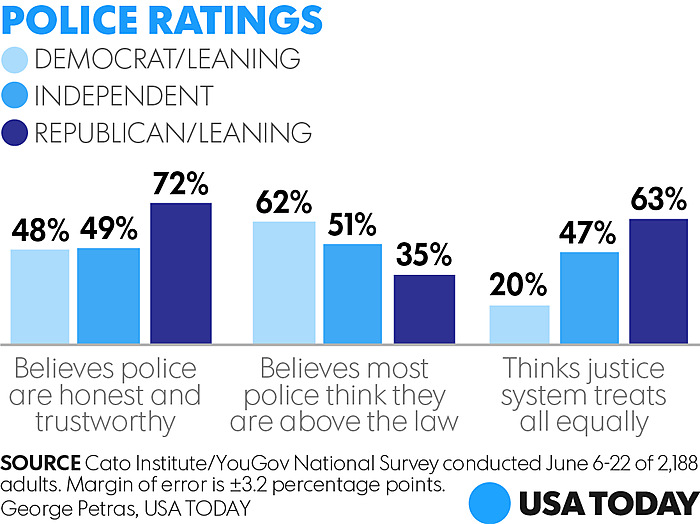