You Ought to Have a Look: Parisian Promises

In Paris this December, the U.N. will hold its 21st Conference of the Parties (COP) to the 1992 Rio Treaty (officially known as the UN framework Convention on Climate Change). Like the 20 previous COPs, the goal will be to entice (browbeat) as many countries as possible to commit to reducing greenhouse gas emissions in an attempt to "stabilize greenhouse gas concentrations in the atmosphere at a level that would prevent dangerous anthropogenic interference with the climate system." [“Dangerous anthropogenic interference” has been defined to mean a global average temperature rise of more than 2.0°C above the preindustrial global average temperature. We are highly doubtful that a 2.0°C rise (of which we are more than a third of the way there) will actually prove “dangerous” especially when adaptations are factored in, but we digress.]

And like the 20 COPs that have come before, COP 21 will fail—largely because greenhouse gas emissions result primarily from burning fossil fuels to produce the energy which powers the modern economy.  Those with a modern economy want to keep it rolling along, and those without, desperately strive for one. Neither group is willing to budge much from these wishes. Consequently global emissions continue to rise.

Even the U.N. now is beginning to realize that meeting a 2.0°C warming target is virtually impossible—this despite rather absurd new calls for the target to be lowered to 1.5°C.

Nevertheless, the U.N. continues to go through the motions (after all, COPs are big business).

At last year’s COP 20, held in Lima, Peru, the best that everyone could agree on was assigning each country some homework along the lines of this: Describe what types of greenhouse gas emissions reductions (with targets and timetables) that you feel you may undertake; justify your answer. The assignment was due on March 31. Most countries are tardy.

Under U.N. terminology, the homework must include a declaration of each country’s “Intended Nationally-Derived Contributions (INDCs)” –that is, what each “intends” to do to reduce their carbon dioxide (and other greenhouse gas) emissions.

A look through some of the work that has been handed in on time reveals a strange mélange on “intentions.”

For example, Russia’s INDC reveals that its declared intent to the U.N. is less stringent than what it already intends to do via its own existing domestic programs. The chart below points out this rather odd occurrence: 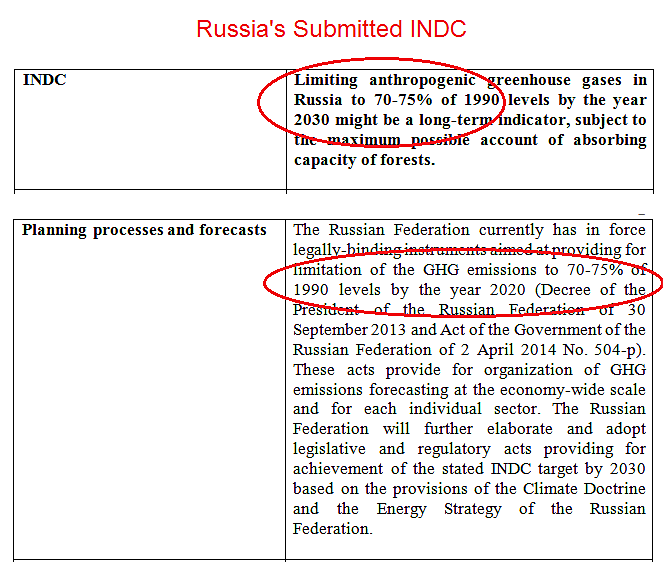 Basically, if we are understanding this right, Russia is proposing to the U.N. a more lax timetable than required via its existing domestic programs and a reliance to the “maximum possible” extent on carbon credits from carbon dioxide uptake by boreal forests.

The Russian proposal already has enviros wringing their hands.

Let’s move on to Mexico. What they claim they intend to do is virtually impossible.

Mexico says it intends to peak its national CO2 emissions in 2026—just 11 years from now.

That’ll be some trick; the charts below show why. The top one is Mexico’s population projections between 2010 and 2050. The forecast is for a robustly growing population, adding over 30 million people by 2050—all of which presumably will require energy to subsist. The bottom figure shows Mexico’s per capita greenhouse gas emissions history for the past 20 years. Again, robust growth indicating that Mexico is increasingly meeting its growing energy needs via the use of greenhouse gas-emitting fossil fuels. 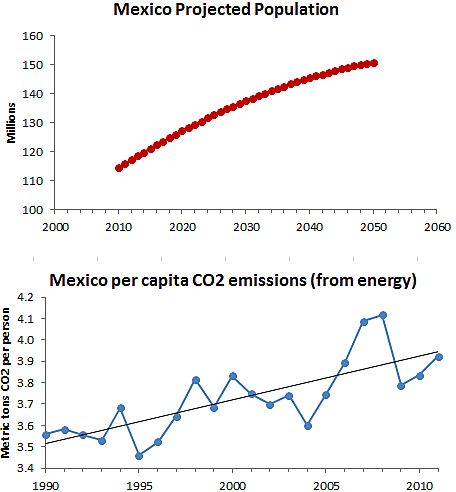 Yet Mexico tells the U.N. that it intends, in just over a decade, not only to halt the growth in per capita emissions, but to turn it downwards to such an extent as to offset population increases. And keep it heading that way.

The real world, on the other hand, isn’t so kind, revealing Mexico’s “intention” as being an empty promise.

And what about the U.S.?

The U.S. announced its intentions as:

The United States intends to achieve an economy-wide target of reducing its greenhouse gas emissions by 26%-28% below its 2005 level in 2025 and to make best efforts to reduce its emissions by 28%.

Turns out that this a bit less than we proposed to do in when we were negotiating at the UN’s 15th COP in Copenhagen in 2009. There we pledged a 30% reduction by 2025 and a 42% reduction by 2030. Our declining pledge is probably is deference to a thing called reality—as depicted in the figure below (taken from the EPA).

As seen in the figure, in Copenhagen, in 2009, greenhouse gas emissions from the U.S. had been on the decline for about 5 years, and stood at 8% below our emissions in 2005. Now, five years later, the picture isn’t as rosy. Between 2009 and 2013 (the last year in the EPA has made data available), there has been scant change in our emissions (early indications for 2014 are for emissions up a bit from 2013). This despite natural gas replacing some coal-fired electricity generation (natural gas produces only about half the greenhouse gas emissions as does coal) and higher fuel economy cars.

The President is finding that it is hard to grow the economy and reduce greenhouse gas emissions at the same time (something that we have been saying for a long time).

Consequently, he is paring back our emission targets and timetables.

But no matter the details, any U.S. plan will never contribute much to mitigating future global climate change.

Here’s why: even under the assumption we cut our fossil fuel emissions 100% by the year 2050 (the President’s  plan only calls for cuts of about 80%), the amount of future global warming that will be averted is about 0.05°C by the year 2050 and 0.14°C by the year 2100. That’s it!  Fourteen-hundredths of a degree—that’s what all the hubbub over carbon taxes, power plant emissions restrictions, Keystone XL pipeline, electric cars, ethanol, etc. is all about. Fourteen-hundredths of a degree. And even that is being generous, because it assumes a climate sensitivity to greenhouse gas emissions that is a good 50 to 100 percent greater than what many new scientific studies are pointing to. If we do the same calculation using a climate sensitivity of 2°C rather than 3°C, the warming averted by the year 2100 drops to 0.10°C (one-tenth of a degree).

You can see all this for yourself using our global temperature savings calculator—a great tool (based on a model developed in part by EPA funding) that everyone contemplating greenhouse gas emissions limitations ought to have at their fingertips.

To get a sense of the temperature savings from what the U.S. is intending for Paris, use our tool and select a “CO2 Reduction” of 80% from the U.S.—that scenario matches very closely to the current U.S. plan.

You’ll find a grand total of about 0.11°C of temperature savings by the end of the century. Too little to matter. Impossible to verify. Scientifically insignificant.

All in all, pretty much par for the course when compared with the other INDCs.

We’ll continue to track the Road to Paris. But thus far, it is a Road to Nowhere.