You Ought to Have a Look: Tamping Down Expectations for Paris

Some folks are just slow to get it.

There is no way on God’s greening earth that international negotiators are going to achieve the emissions reductions that climate models tell them are necessary to keep the rise in the planet’s average surface temperature to less than 2°C above the pre-industrial value.

At the United Nations climate meeting held in Cancun back in 2012, after kicking around the idea for several years, negotiators foolishly adopted 2°C as the level associated with a “dangerous interference” with the climate system—what everyone agreed to try to avoid way back in 1992 under the Rio Treaty.

Bad idea—it won’t happen. Even the folks at the U.N. are starting to realize it.

According to an article in this week’s The Guardian titled “Paris Climate Summit: Missing Global Warming Target 'Would Not Be Aailure'”:

EU climate chief and UN’s top climate official both play down expectations that international climate talk pledges will help hit 2C target… “2C is an objective,” Miguel Arias Canete, the EU climate chief, said. “If we have an ongoing process you can not say it is a failure if the mitigation commitments do not reach 2C.”

…In Brussels, meanwhile, the UN top climate official, Christiana Figueres, was similarly downplaying expectations, telling reporters the pledges made in the run-up to the Paris meeting later this year will “not get us onto the 2°C pathway”.

There’s so much backpeddling and spinning going on, that you're motion sick reading the article. While we certainly did see this coming, we didn’t expect the admissions were going to start at this early date.

There is actually one way in which the global temperature rise may stay beneath 2°C, at least for the next century or so, even under the U.N.’s mid-range greenhouse gas emissions scenarios—that is, if the earth’s climate sensitivity is a lot lower than that currently adopted by the U.N. and characteristic of their ensemble of climate models.

Most climate negotiators and climate activists are loathe to admit this might be the case, as that would be the end of first-class travel to various hot spots to (yet again) euchre our monies.

But scientific evidence continues to mount, maybe even enough to send them to the back of the plane. Instead of the earth’s equilibrium climate sensitivity—how much the earth’s average surface temperature will ultimately rise given a doubling of the atmospheric concentration of carbon dioxide—being somewhere around 3°C (as the U.N. has determined), the latest scientific research is starting to center around a value of 2°C, with strong arguments for an even lower value (closer to 1.6°C).

If the earth’s response to greenhouse gas emissions is to warm at only one-half to two-thirds the rate negotiators currently assume, it means it is going to take longer (and require more emissions) to ultimately reach a temperature rise of 2.0°C. This buys the negotiators more time—something about which negotiators, conference organizers, and associated service industries should be ecstatic!

As an example of how much time would be bought by a lower climate sensitivity, researchers Joeri Rogelj, Malte Meinshousen, Jan Sedlacek, and Reto Knutti—whose work has been telling us all along that 2°C was basically impossible—ran their models incorporating some recent estimates of low sensitivity in place of the IPCC preferred sensitivity assessment.

What they found is available via the open access literature and worth taking a look at. Figure 1 sums it up. Using a lower climate sensitivity (pink) reduces the end-of-the-century temperature rise (left) and increases the quantity of carbon dioxide emissions before reaching various temperature thresholds (right). 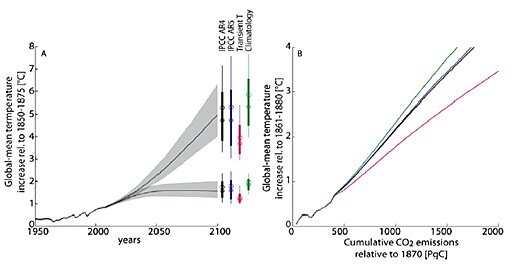 Figure 1. Temperature evolution over time (left) and in association with cumulative carbon dioxide emissions (right) from models run under different assumptions for the equilibrium climate sensitivity. The black and dark blue colors use the U.N. values; green represents a higher climate sensitivity;  and pink a lower one (from Rogelj et al., 2014). Of note is a massive gaffe—which is to implicitly attribute all warming since 1861 to greenhouse gases. The fact is that the sharp warming of the early 20th century occurred before significant emissions.

This information will surely be useful in Paris this December for those countries who seek less stringent emissions reduction timetables.

And finally, it was announced this week that the homework that the U.N. handed down to each country at the end of the last year’s climate meeting in Lima is due in draft form on February 13th, which was for every nation to publish a target and timetable for reducing carbon dioxide emissions and a plan as to how that is to be achieved.

It ought to be interesting to see what grades everyone receives on their assignments.

No doubt the U.N. officials have already seen some that were handed in early, which is why they announced that they are going to be  grading on a curve. What should have been “F”s (for failure to meet the 2° target) will now surely be given “A”s (for effort). As everyone knows, grade inflation is a worldwide phenomenon.