You Ought to Have a Look: Our Energy Future, Science Regress, and a Greening Earth

We’ll jump right into this week by highlighting an appearance by Manhattan Institute senior fellow Mark Mills on The Federalist’s Radio Hour. During his time on the show, Mills explains how the foreseeable future is going to play out when it comes to global energy production and why he says that even if you were concerned about climate change, “there really isn’t anything you can do about it.”

Mills is one of the leading thinkers and analysts on energy systems, energy markets, and energy policy, bringing often overlooked and deeply-buried information to the forefront.

During his nearly hour-long radio segment, Mills discusses topics ranging from climate change, the world’s future energy mix, the role of technological advances, and energy policy as well as giving his opinions on both Bills Gates’ and Pope Francis’ take on all of the above. It is an entertaining and informative interview.

As a taste, here’s a transcript of a small segment:

In the life we live, and the world we live in, we have to do two things, one is deal with reality [current understanding of physics] and the moral consequences of that, and we can have aspirations. If the aspiration, which Bill Gates’ is, is to use fewer hydrocarbons, we need to support basic research.

Mark Mills’ sentiment closely matches that which Alex Epstein explained to Congress a few weeks back and that we highlighted in our last edition.

If you can find any time to listen to a little or a lot of Mills’ full interview, you’ll probably find that what he says to make a lot of sense. Funny, though, how much of it seems to have escaped some folks.

Next up is an article in the current issue of First Things authored by Walter Wilson titled “Scientific Regress.” If you think the title is provocative, you ought to have a look at the rest of the piece beginning with the first line “The problem with ­science is that so much of it simply isn’t.” Instead, it reflects the results of a gamed system driven by pre-conceived ideas often emanating from the science/political establishment.

In describing the current sad state of science, Wilson reflects our concerns here at the Center for the Study of Science, that external factors (e.g., influence, power, money) act to negatively shape the course of science—a negative influence that is hard to shake.

[O]nce an entire field has been created—with careers, funding, appointments, and prestige all premised upon an experimental result which was utterly false due either to fraud or to plain bad luck—pointing this fact out is not likely to be very popular. Peer review switches from merely useless to actively harmful. It may be ineffective at keeping papers with analytic or methodological flaws from being published, but it can be deadly effective at suppressing criticism of a dominant research paradigm. Even if a critic is able to get his work published, pointing out that the house you’ve built together is situated over a chasm will not endear him to his colleagues or, more importantly, to his mentors and patrons.

Wilson leaves us with this warming:

At its best, science is a human enterprise with a superhuman aim: the discovery of regularities in the order of nature, and the discerning of the consequences of those regularities. We’ve seen example after example of how the human element of this enterprise harms and damages its progress, through incompetence, fraud, selfishness, prejudice, or the simple combination of an honest oversight or slip with plain bad luck. These failings need not hobble the scientific enterprise broadly conceived, but only if scientists are hyper-aware of and endlessly vigilant about the errors of their colleagues…and of themselves. When cultural trends attempt to render science a sort of religion-less clericalism, scientists are apt to forget that they are made of the same crooked timber as the rest of humanity and will necessarily imperil the work that they do. The greatest friends of the Cult of Science are the worst enemies of science’s actual practice.

The whole piece, including the examples included therein, is an eye-opener. You ought to have a look!

And finally, we’ll leave you with a Friday Funny coming from Cartoons by Josh (a frequent commenter on the often ridiculous goings-on surrounding global warming). In this strip, Josh neatly sums up the reaction when climate gloomsayers are confronted with good news—in this case, new results showing that carbon dioxide emissions from human activities, such as the burning of fossil fuels to produce energy, are leading to a greener, more productive earth (a story that we covered in our piece “A Greening (in a Good Way) Earth”): 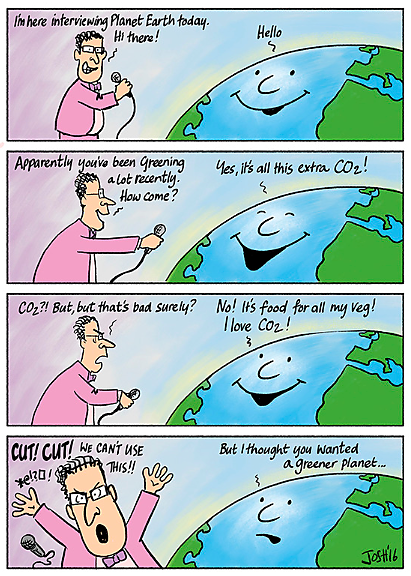