A Greening (in a Good Way) Earth


Long before “green” came to be associated with moral superiority with regard to climate change, it was a color. The color of vegetation. Healthy, vibrant, prosperous vegetation was green, while unhealthy, senescent, or dormant vegetation was brown. In this context, to say the world is “greening” is to mean that its vegetation—upon which virtually all life depends—is flourishing and expanding. This is a much preferable situation to say its “greening” in the former sense—an amalgam of smoke and mirrors with no demonstrable real‐​world implication, impact, or most importantly, benefit.


We’re happy to report here that a new scientific paper reports that the world is greening—in the best sense of the word.


Published this week in the scientific journal Nature Climate Change is a paper titled “Greening of the Earth and its drivers” by a collection of 32 authors representing a combination of research programs from around the world. The authors compiled a large collection satellite observations of parameters associated with vegetative health collected since 1982, sorted through it, analyzed it, and then reported:

We show a persistent and widespread increase of growing season integrated LAI (greening) over 25% to 50% of the global vegetated area, whereas less than 4% of the globe shows decreasing LAI (browning).

Figure 1 shows the spatial distribution and magnitude of the greening trends. This is about as good of a large‐​scale environmental result as one could ever hope for. 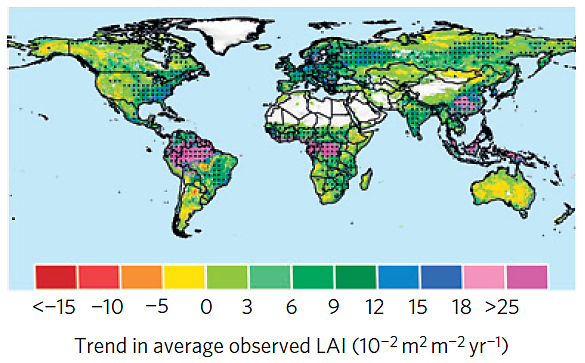 What is the driver of this overwhelmingly positive outcome? Again from the authors:

“CO2 fertilization” is a result of increasing atmospheric concentrations of carbon dioxide—an important plant fertilizer—primarily caused by carbon dioxide released from the chemical processes associated with the burning of fossil fuels to produce energy. And to think that some folks want to try to dial back this benefit!


While it may be hard to monetize a healthier and productive earth, there have been some attempts to place a value on some aspects of a greener world—primarily those which result from our increasingly productive agricultural systems. After all, the crops we eat are largely the seeds and fruits of plants, and they do better when carbon dioxide levels are higher.


Our Dr. Craig Idso calculated that rising atmospheric levels of carbon dioxide have added about $3.2trillion to the global economy since 1961 as a result of crop production increases and goes on to project nearly $10 trillion more by 2050. That’s a huge positive externality from carbon dioxide emissions.


It is interesting to note that most of the “integrated assessment models” (IAMs) that have been developed and designed to try to determine the “social cost of carbon”—that is, the monetary impact of the emission of each additional ton of carbon dioxide summed over the next 300 years—do not incorporate the positive effects of carbon dioxide fertilization. The primary exception to this situation is the FUND model developed by Dr. Richard Tol. Unsurprisingly, Tol’s model produces a much lower social cost of carbon than the other IAMs. Given that carbon dioxide fertilization and the positive impacts it has of the planet’s plant life is a firmly established scientific reality (as further evidenced by the new findings reported here) you’d think that any IAM that didn’t include it would be summarily rejected. Instead, such models are embraced by the Obama Administration and used to justify all manner of federal regulations.


And before we leave this new greening paper, we want to point out the comparison made by the authors of the patterns of observed trends with those projected to have occurred from a leading climate/​vegetation model (Figure 2). We draw your attention to the western half of the United States. Here, the climate/​vegetation model produced large (in area and magnitude) browning trends, driven by a general drying trend over the period of record. The observations on the other hand, show little, if any, trends towards browning, and instead show a general, mild, greening over the region. 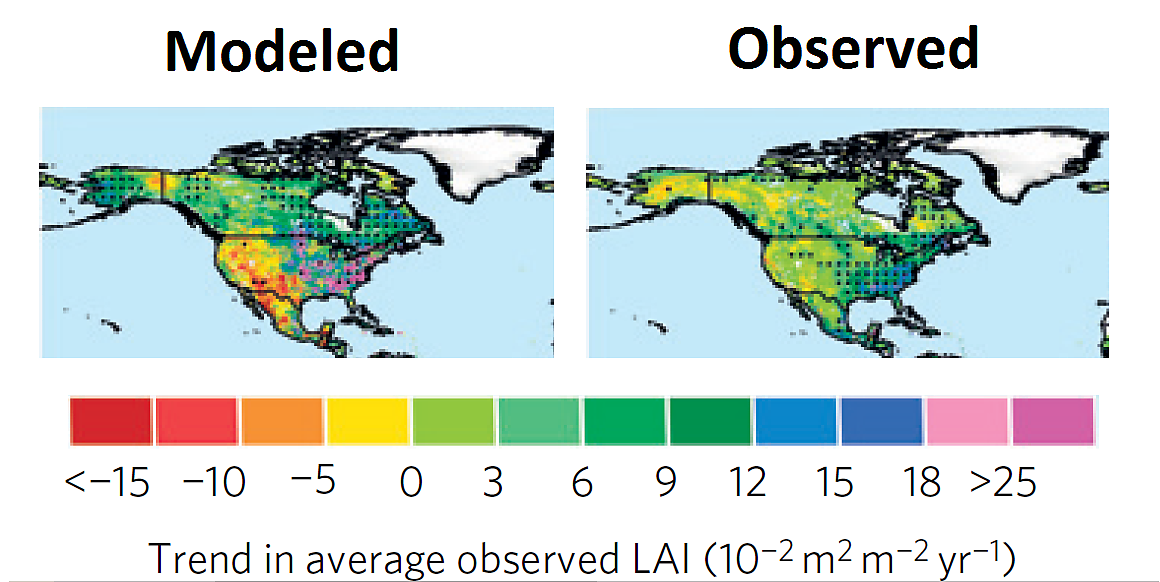 Such pronounced negative trends were not captured by any of the three satellite products. Our analysis indicated that models may be over‐​sensitive to trends in precipitation as soil water holding capacities maybe under‐​estimated in models, and deep rooting, ecosystem composition changes (e.g. shrubification) are not modeled, which is consistent with previous studies.

In other words, the models don’t have their, er, stuff, together. And as a consequence, they project negative outcomes that don’t materialize.