Yes, the Federal Government Has a Broad Power to Tax, but That’s Different from Having a Green Light to Spend

I'm not a lawyer, or an expert on the Constitution, though I sometimes play one on TV.

The Congress shall have power to lay and collect taxes on incomes, from whatever source derived, without apportionment among the several States, and without regard to any census or enumeration.

That being said, the power to tax is not the same as the power to spend. And at the risk of sounding old fashioned, my big objection to the Obamacare decision is that health care is not listed as one of the federal government's enumerated powers in Article I, Section VIII of the Constitution.

Sadly, that horse got out of the barn many decades ago, culminating in a horrible 1942 Supreme Court decision that said a man couldn't grow crops on his own land to feed his own animals for consumption by his own family.

But let's look at the bright side. Even though the Obamacare case was decided incorrectly, at least the judiciary is beginning to reconsider these issues, thanks in large part to the work of the Cato Institute's legal scholars and adjunct legal scholars.

P.S. While the federal government has a broad power to tax, I should add that this doesn't - or at least shouldn't - vitiate other provisions of the Constitution. This is why it is so disappointing that we've seen the erosion of key civil liberties such as the presumption of innocence and the 4th Amendment's protection against unreasonable searches and seizures.

P.P.S. This Michael Ramirez cartoon about Obamacare and the Constitution is amusing, though that's not much solace given what happened. And here's another one of his cartoons, this one on the broader theme of Obama vs. the Founding Fathers.

P.P.S. Speaking of cartoons, this one seems especially appropriate today. 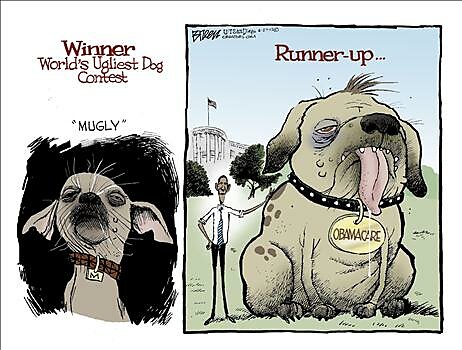 If you like that one, you can see another Breen cartoon here.