Perhaps the most interesting development in education policy this year has been Nevada's adoption of the first education savings account program to offer nearly universal eligibility. Students who attended a charter or district school in the previous year are eligible to have a portion of the state funds that would have been spent on them instead deposited into an account that they can use to purchase a wide variety of educational goods and services. By empowering families with more alternatives to the generally low-performing district schools, the ESA program is also a pressure relief valve for Nevada's severely overcrowded schools.

Overall, half of the nearly 3,100 applications submitted as of Oct. 28 list an address in a ZIP Code among the top 40 percent of median households in Nevada. That's in contrast to just 10.7 percent of applications from households with median incomes in the bottom 40 percent.

It's important to note that these are not the final ESA enrollment figures. As Matthew Ladner of the Foundation for Excellence in Education pointed out, these are merely the "earliest of the early adopters." At the time of the Review-Journal report, Nevada families still had more than two months to apply for an ESA before the program commenced. Nevertheless, opponents of parental choice have seized on the development:

"It's what we expected," said Sylvia Lazos, policy director for the education reform group Educate Nevada Now [which is suing to end the ESA program].

The ESA program "was not tailored to low-income parents. It was not tailored to parents with children in (low-performing) schools," she said. "With every program of this nature, it's just the reality that affluent and high middle-income families are always in the best position to take advantage of government programs."

Yet nowhere is this more true than in the government schools. Because the government assigns students to district schools based on the location of the home their parents can afford, wealthier families have access to district schools that are safer and higher quality than those to which low-income students are assigned. It's not resources that account for the difference in performance -- Washington, D.C. spends nearly $30,000 per pupil for one of the worst school districts in the nation. Culture certainly plays an important role, but so does the ability to exit.

Bill Gates can send his children to their assigned district school at no charge (beyond what he already paid in taxes), but he can also afford to enroll them elsewhere. Because Gates and other higher-income families can afford to leave, the district schools have to be responsive to their needs in order to keep them (and the state funds allocated based on their enrollment). By contrast, low-income families often have no financially viable alternative. Their assigned district schools have no financial incentive to be responsive to a captive audience.

Unlike a geography-based school system, a market-based system creates incentives for all schools to be responsive to parents' wishes and to find ways to provide a better education at a lower cost. That is why it is the poor, not the rich, that that stand to gain the most from a market in education. As Milton and Rose Friedman explained in Free to Choose:

Industrial progress, mechanical improvement, all of the great wonders of the modern era have meant relatively little to the wealthy. The rich in Ancient Greece would have benefited hardly at all from modern plumbing: running servants replaced running water. Television and radio? The Patricians of Rome could enjoy the leading musicians and actors in their home, could have the leading actors as domestic retainers. Ready-to-wear clothing, supermarkets – all these and many other modern developments would have added little to their life. The great achievements of Western Capitalism have redounded primarily to the benefit of the ordinary person. These achievements have made available to the masses conveniences and amenities that were previously the exclusive prerogative of the rich and powerful. [Emphasis added.]

A perfect example of this is the $10 smartphone that Walmart is selling that has better specs than the original iPhone:

For less than $10 (plus the cost of data access) the user gets access to the Google Play app store, giving him or her the power to summon transportation at the push of a button, instantly connect with friends, and watch livestreams from all over the world. A bona fide smartphone, in other words.

It’s perhaps even more impressive when you consider that its modest specs—a 3.8-inch display, 3G and Wi-Fi networking, and a 3-megapixel camera—surpass those of the original iPhone, which was referred to in the tech press at the time as the “Jesus phone.”

Higher-income individuals were the early adopters of the iPhone and other smartphones. They paid a premium which allowed tech companies to recoup their investment in research and development and earn a significant profit. Those profits created incentives for them to expand production and for other companies to follow suit. Over time, real prices fell even as quality improved dramatically. The original iPhone models sold for $499 to $599 but later generations already sell for much less, making them accessible to the poor. Indeed, even as of 2012, more than half of American 18- to 24-year-olds earning less than $15,000 per year owned a smartphone. At just $10 a piece, smartphones will be ubiquitous.

Of course, the wealthy still have access to better quality (and much more expensive) smartphones with the latest and greatest features. But as Michael McShane of the American Enterprise Institute has explained, "markets work when the spectrum of relative quality drives improvements in absolute quality." [Emphasis added.] Wealthier individuals continue to pay a premium for the cutting-edge technology, which later becomes standard and more affordable for everyone.

Likewise, higher-income families may be the first adopters of ESAs, but expanding the market in education will benefit everyone in the long run. Even in the short run, the initial research on ESA programs shows that low-income families benefitted the most from greater educational opportunity. In 2013, Jonathan Butcher of the Goldwater Institute and I conducted the first parental-satisfaction survey of Arizona families using ESAs. All of the respondents had students with special needs who had previously attended their assigned district schools. Unsurprisingly, low-income families were the least satisfied with their district schools: 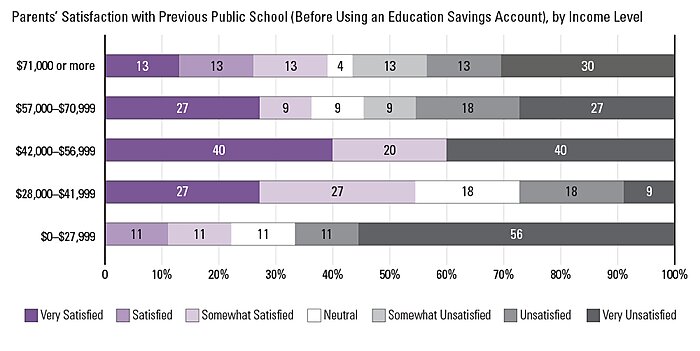 By contrast, the lowest-income families were the most satisfied with the education they purchased with their ESA: 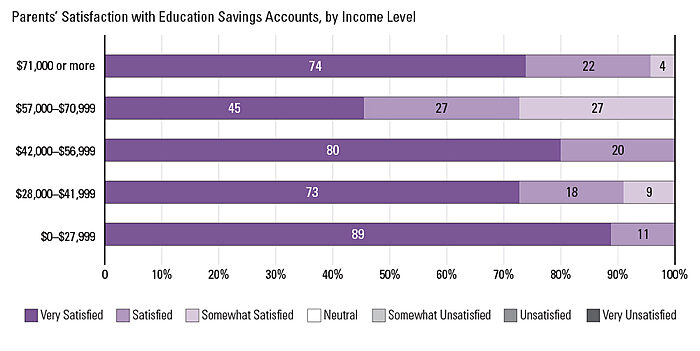 This does not mean that educational-choice advocates can remain complacent. If anything, the Review-Journal report shows that greater efforts are needed to inform low-income families about the choices that are available to them. Fortunately, those efforts are already underway.