Why Are Interest Rates So Low?

Since the financial crisis of 2007-09, and especially in recent months, Europe and the United States have seen zero and even slightly negative short-term nominal interest rates, and sub-zero risk-free real interest rates.  In June I participated in a conference on “Zero Interest Rate Policy and Economic Order” at the University of Leipzig, organized by Gunther Schnabl (U Leipzig), Ansgar Belke (U Duisburg-Essen), and Thomas Mayer(Fossback von Storch Research Institute).  The topic faced participants with the need to make a key judgment call: Are ultralow rates the new normal, i.e. are they long-run equilibrium rates determined by market fundamentals, or are they so low because of ultra-easy monetary policies and other policies?  In Wicksell’s terminology, is the real “natural rate” currently below zero, or are central banks holding market rates below the current natural rate? We cannot directly observe the natural rate, but we can look for indirect indicators.

In Wicksell’s famous and now-standard analysis, a central bank can drive (or hold) the market rate of interest below the natural rate by injecting money, which shifts the supply of loanable funds curve to the right, increasing the quantity of loanable funds and lowering the interest rate (the “liquidity effect”).  As the new money circulates it drives up prices and nominal incomes, however, which shifts the nominal demand for loanable funds curve to the right, raising the market interest rate (the “nominal income effect”).  If the central bank wants to keep the market rate low in the face of the nominal income effect, it must accelerate the money injection.  Short-term real rates have been negative, and nominal rates near zero, for eight years now with little sign of accelerating broad money growth or a rising inflation rate.  Thus the Wicksellian cumulative-process scenario does not seem to be a viable candidate for explaining why current rates have remained so low since 2008.

Lukasz Rachel and Thomas D Smith, in a widely cited Bank of England working paper, spell out the market-fundamentals view: “The co-movement in rates across both advanced and emerging economies suggests a common driver: the global neutral real rate may have fallen.”  They try to quantify changes over the last 30 years in the various factors shifting the supply of loanable funds rightward (population bulge nearing retirement, larger income share of the well-to-do, the “glut” of “precautionary saving by emerging markets”) and the demand leftward (depressed investment, higher risk premia) for loanable funds.  Larry Summers, particularly in his Homer Jones lecture at the St. Louis Fed in April, has proposed that the demand for loanable funds curve has shifted leftward due to “secular stagnation.”

Several participants at the Leipzig conference offered an alternative view, particularly William R. White (formerly of the Bank for International Settlements, now at the OECD, and a member of the CMFA academic advisory board) and Andrew Filardo (BIS).  Their view is spelled out in the new (unsigned) BIS Annual Report released on 26 June, just days after the conference.  The Report argues that zero rates are not the permanent new normal, but are the lingering aftermath of the financial boom-bust cycle that developed economies have gone through.  To quote (p. 14): “unchecked credit booms can be part of the problem and leave a long shadow after the bust, sapping productivity growth.  In addition, debt overhangs depress investment, which weakens productivity further.”  In a passage that bears quoting at length, the Report (p. 14) contrasts its view with the view that secular stagnation is the main force keeping interest rates low.  The secular stagnation view fails to square with the fact that a credit boom preceded the bust:

[Our] interpretation of the post-crisis global growth slowdown differs in key respects from one that has been gaining currency – secular stagnation.  It suggests rather that the world is better regarded as having suffered a series of financial booms gone wrong.  Consider, admittedly in a very stylised form, the main differences in the two views.  The most popular variant of the secular stagnation hypothesis posits that the world has been haunted by a structural deficiency in aggregate demand.  This deficiency predates the crisis and is driven by a range of deep-seated factors, including population ageing, unequal income distribution and technological advances.  In this view, the pre-crisis financial boom was the price to pay for having the economy run at potential.  The key symptom of the malaise is the decline in real interest rates, short and long, which points to endemic disinflationary pressures.  In the hypothesis proposed here, the world has been haunted by an inability to restrain financial booms that, once gone wrong, cause long-lasting damage. The outsize and unsustainable financial boom that preceded the crisis masked and exacerbated the decline in productivity growth.  And rather than being the price to pay for satisfactory economic performance, the boom contributed, at least in part, to its deterioration, both directly and owing to the subsequent policy response.

The BIS, whose clients are the worlds’ central banks, does not directly blame central banks’ easy credit policies for fueling financial booms.  But the reader is free to read the argument that way. When it comes to policy recommendations, the Report (p. 20) does call for tighter monetary policy (that is, tighter than inflation targeting suggests) to avoid feeding incipient booms: “monetary frameworks should allow for the possibility of tightening policy even if near-term inflation appears under control.”  Rather than describe this as “using monetary policy to lean against financial imbalances” of unspecified origin as the Report does, I would characterize such an approach as using indicators other than only consumer prices (namely asset prices and/or nominal GDP) as indicators to judge when monetary policy is too loose.  Rather than describing the practical policy-making task as developing guidelines to help central banks “more effectively tackle the financial booms and busts,” I would say that we need guidelines to stop central banks from fueling financial booms and busts.  Thus the BIS Report supports the case for nominal GDP as a less hazardous central bank target than the CPI or other inflation index, since an NGDP level target does not call for expansionary monetary policy to offset the benign price-lowering effects of productivity improvements.

The BIS Report deserves our serious attention.  Its approach is more promising, to be sure, than the secular stagnation approach of Summers, who judges the last eight years of economic performance sub-par by reference to the extrapolated bubble path (aka the CBO’s 2007-estimated path of real potential output).  His diagnosis: chronically insufficient nominal aggregate demand.  This diagnosis implies that the price level has failed to approach its equilibrium level in the seven to eight years since the 2008-09 velocity shock, which violates our standard understanding about how long the price level takes to adjust to nominal shocks.  It approaches incoherence to suppose that real interest rates have approximately reached long-run equilibrium in intertemporal markets, and simultaneously that the level of prices has not yet approximately reached long-run equilibrium in the spot market where money balances exchange against goods. 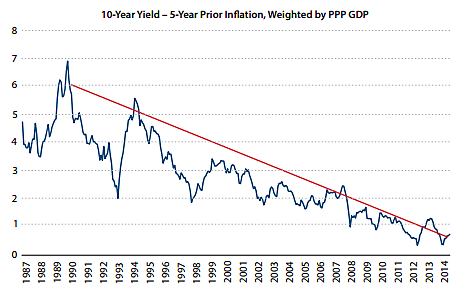