The Establishment is very concerned this morning that the representatives of the people have resisted demands for stricter gun control measures. The president calls it “shameful.” The New York Times editorial board intones, “The Senate Fails America.” Dana Milbank of the Washington Post deplores a lack of “courage” on Capitol Hill, though some might think it takes courage to defy the overwhelming drumbeat of the national media.


Whatever the merits and popularity of the specific measures that went down to defeat in the Senate on Wednesday, I think the Establishment fails to appreciate the depth of American support for the Second Amendment. NPR and other media have lately noted a growing libertarian trend in American politics. That’s not just about taxes, Obamacare, marijuana, and marriage equality. It also involves gun rights. After each high‐​profile shooting, support for gun control rises. But it tends to fall again in short order, as public opinion reverts to the baseline of strong support for gun rights.


I was struck by this poll graphic in the Washington Post on Wednesday. Despite the virtually unanimous support for stricter gun control in the national media, along with other opinion shapers such as Hollywood and the universities, and despite the mass shootings that have received so much attention in our modern world of 24‐​hour news channels, Americans are becoming more convinced that guns make your family safer. 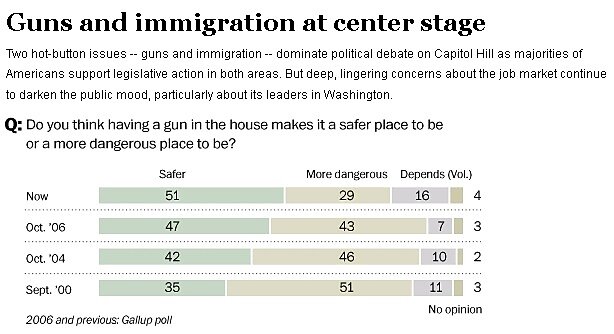 The fact is, America is a country fundamentally shaped by libertarian values and attitudes. Our libertarian values helped to create the Constitution and the Bill of Rights, and those documents in turn shape our thinking about freedom and the limited powers of government. In their book It Didn’t Happen Here: Why Socialism Failed in the United States, Seymour Martin Lipset and Gary Marx write, “The American ideology, stemming from the [American] Revolution, can be subsumed in five words: antistatism, laissez‐​faire, individualism, populism, and egalitarianism.” If political scientists Herbert McClosky and John Zaller are right that “[t]he principle here is that every person is free to act as he pleases, so long as his exercise of freedom does not violate the equal rights of others,” then we can expect Americans to cling to their gun rights for a long time.


The New Republic’s daily email this morning asks, “Who killed gun control?” Who? The Americans.