There’s been lots of talk lately about a turn to the right in American politics. President Obama’s declining poll numbers, the sharp rise in opposition to his health‐​care plan during 2009, the growth of the grass‐​roots Tea Party movement, and the polls predicting a Republican takeover of the House of Representatives all point to a resurgence of conservatism in the electorate. But as I noted last year, there are also trends in the direction of social tolerance these days. Some indeed have described current political trends as a libertarian resurgence.


California voters are getting ready to vote on a marijuana legalization initiative, and polls show rising support. The New York Times points to other signs of change on the marijuana front: Pot has already become essentially legal for anyone in California who can tell a medical marijuana clinic that it would make him feel better. Attorney General Eric Holder has said that the federal government would back off its attempt to enforce the federal laws against medical marijuana in the 13 states that have legalized medical use. The threats to prosecute Michael Phelps for a bong hit were widely ridiculed. Those developments have led Andrew Sullivan, Jacob Weisberg, and CBS News to speculate about a “tipping point” for change — at last — in marijuana prohibition.


Meanwhile, TPM and AOL’s PoliticsDaily also see a tipping point for marriage equality. A majority of New Yorkers now join Gov. David Paterson in supporting same‐​sex marriage. That same ABC News/​Washington Post poll finds that “in 2004, just 32 percent of Americans favored gay marriage, with 62 percent opposed. Now 49 percent support it versus 46 percent opposed — the first time in ABC/​Post polls that supporters have outnumbered opponents.” Since the passage of California’s Proposition 8 in 2008, several states and the District of Columbia have granted marriage rights to same‐​sex couples.


This chart, prepared for me by Garrett Reim, shows recent trends in public opinion polls on several issues — support for smaller government, marriage equality, and marijuana legalization along with opposition to President Obama’s health care plan and to the job the president is doing. The latter two have moved more sharply, but all five lines move at least marginally in a libertarian direction: 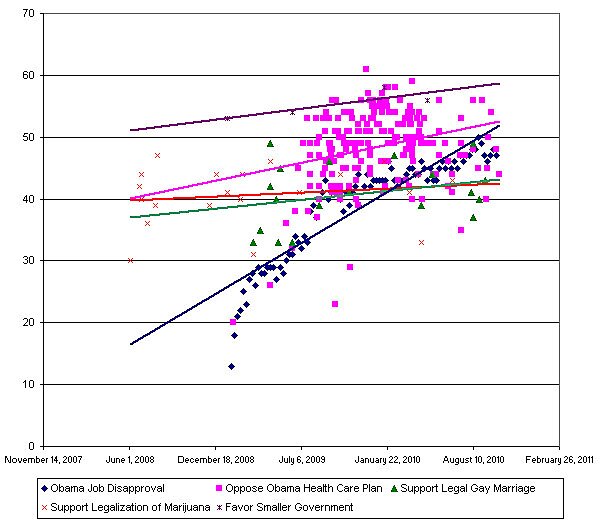 
As some analysts have noticed, what’s going on in American politics is a shift in a libertarian direction. This chart provides some more evidence.