When Our Faces Are Our “Papers”

A passenger on a bus at Fort Lauderdale’s Greyhound station recently recorded disturbing footage of Customs and Border Protection (CBP) officers walking up the bus’ aisle and asking for proof of citizenship. Although nothing new, it’s sad to see American law enforcement conducting the kind of “Papers Please” stops that many Americans usually associate with foreign authoritarian governments. Thanks to advances in facial recognition technology, CBP and other law enforcement agencies will soon not have to ask us for identification. Our faces will be our papers.

Under current law and Supreme Court precedent, CBP’s behavior on the Greyhound bus was not illegal. Thanks to 8 U.S.C. § 1357(a)(3), CBP officers within 100 miles of the border can board and search “any railway car, aircraft, conveyance, or vehicle” in order to prevent illegal immigration. Two‐​thirds of the people living in the United States live within this 100‐​mile zone, which encompasses entire states, including Florida. 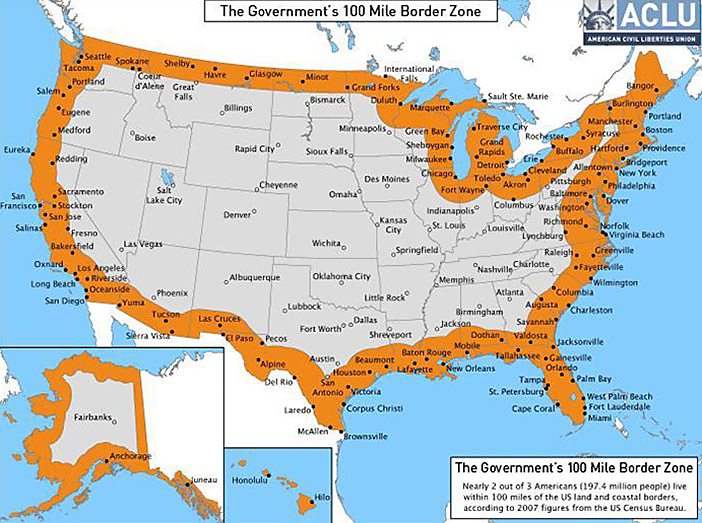 The Supreme Court upheld warrantless vehicle inspections at internal checkpoints in United States v. Martinez‐​Fuerte (1976). In his Martinez‐​Fuerte dissent Justice Brennan presciently noted, “Every American citizen of Mexican ancestry, and every Mexican alien lawfully in this country, must know after today’s decision that he travels the fixed checkpoint highways at the risk of being subjected not only to a stop, but also to detention and interrogation, both prolonged and to an extent far more than for non‐​Mexican appearing motorists.”

The erosion of our liberties in the name of border security is not a recent development. The so‐​called “Border Exception” to the Fourth Amendment was expressed bluntly by Justice Rehnquist in his United States v. Ramsey (1977) majority opinion:

That searches made at the border, pursuant to the longstanding right of the sovereign to protect itself by stopping and examining persons and property crossing into this country, are reasonable simply by virtue of the fact that they occur at the border should, by now, require no extended demonstration.

Law enforcement officers who wish to identify someone usually approach that person and ask for identifying documents. Throughout the world policies governing under what circumstances law enforcement can instigate one of these interactions and what documents resident can or must carry vary widely. In Israel, for example, all residents over the age of 16 must have a national ID card, and they are legally required to have this ID with them at all times. Nefesh B’Nefesh, a nonprofit that helps those hoping to migrate to Israel, notes the disturbing degree to which national ID is embedded in the national culture:

Israelis use their ID number (Mispar Zehut) freely and it is common to give out your ID number in even the most basic and public of forms. For North Americans who are used to keeping their personal information private, it is helpful to think of your Mispar Zehut as interchangeable with your name.

Fortunately, in the United States citizens are not required to have identifying documents on them as they go about their business. Green card holders and other immigrants aren’t so lucky. Section 264(e) of the Immigration and Nationality Act (INA) requires immigrants over the age of 18 to carry their “evidence of registration document” (e.g. green card, I-94 form) at all times. In addition, Section 287(a) of the INA allows CBP officers “to interrogate any alien or person believed to be an alien as to his right to be or to remain in the United States” without a warrant.

What CBP officers did on the bus in Fort Lauderdale is shocking, but it was legal. Yet in the near future, it is unlikely that CBP will have to ask people for documents in order to verify identification.

Facial recognition technology is improving, and the law enforcement community has been taking notice.

Last year Axon, one of the most prominent law enforcement equipment companies, issued a report on policing technology, which stated the following:

The future of law enforcement technology looks smarter and more connected, and advancements in artificial intelligence and machine learning will have profound implications for policing. Soon, you’ll be able to tell almost immediately if someone has an outstanding warrant against them, thanks to facial recognition technology.

But the fact that I could potentially walk down the street with a camera in real time, scanning faces, doing facial recognition while it’s recording, sending that data to the cloud for real‐​time analysis, have that data come back and somebody tell me, “That guy in the red hat, red shoes you just passed, he’s wanted for burglary” That type of real‐​time, big data analysis application would be huge.

The Axon report mentions how the merger of facial recognition and body camera technology could help officers identify people with outstanding warrants or suspects. But this technological shift will also impact innocent Americans. Around half of all American adults are already in a law enforcement facial recognition network thanks in large part to the fact that 16 states allow the Federal Bureau of Investigation (FBI) to access their driver’s license photos.

In a world where police officers and border patrol agents are outfitted with body cameras with real‐​time facial recognition capability, it won’t be necessary for them to approach you and ask for ID in order for them to identify you. If real‐​time facial recognition becomes a normal feature of CCTV cameras, body cameras, and drones the anonymity we currently enjoy as we go about our regular business will become a luxury of the past.

In a city where real‐​time facial recognition is widespread, you could take steps to cover your face with a mask or large sunglasses. You could use de‐​identification technology to make images unrecognizable to facial recognition algorithms. However, such strategies could look suspicious to law enforcement. When surveillance is ubiquitous, those who take steps to avoid it will stand out. Far too many people find the argument that “If you’ve got nothing to hide, you’ve got nothing to worry about” persuasive, a sad reflection of the fact that too many people attempts to secure privacy are evidence of suspicious or criminal behavior.

If you don’t like the idea of your facial images making their way to the FBI, you would have to abandon driving if you live in some states. DHS is interested in installing more facial recognition scanners at airports, and last year it issued a privacy impact assessment for its expansion of the biometric entry‐​exit system for international flights. In that assessment, DHS stated candidly:

the only way for an individual to ensure he or she is not subject to collection of biometric information when traveling internationally is to refrain from traveling.

For many Americans, abandoning driving and international travel is too high a price to pay in order to avoid detection via face scanners.

In the not too distant future, our faces will be our “papers.” Police officers won’t need to talk to us, let alone examine ID documents, in order to identify us. Those who don’t appear in a facial recognition network or take steps to avoid facial scan detection will be the subject of extra scrutiny. Unless lawmakers take steps to ensure that only wanted suspects and those with a history of violent crime are included in law enforcement facial recognition networks those who wish to avoid being identified via facial scans will have to take steps that come at high social and economic cost.

Interactions with law enforcement can sometimes be stressful and intimidating, but if a border patrol agent or any other law enforcement officer approaches you and asks for ID, I would recommend you keep the words of Clarence Harry Willcock in mind.

On December 7, 1950 a police officer in London stopped Willcock, a dry‐​cleaning manager, for speeding. The officer asked Wilcock to produce his national ID card. The British government had introduced ID cards during the Second World War. Despite the war being over, the ID cards remained. Wilcock refused, reportedly telling the officer, “I am a Liberal, and I am against this sort of thing.” Although he was charged, his case marked the last time someone was convicted for not producing an ID card in the U.K. Wilcock went on to found the Freedom Defence Committee, campaigning against national ID cards, going so far as to rip his ID card up on the steps of the National Liberal Club. Winston Churchill became prime minister for the second time the year after Wilcock refused to hand over his ID card and oversaw the abolition of the national ID card scheme.

At a time when civil liberties are being continually eroded in the name of national and border security, it’s easy to feel despondent. It won’t change government policy, but you might be surprised how refreshing it feels to flex some liberal muscles when faced with the growth of the increasingly intrusive surveillance state. Ask to opt out of the TSA’s body and face scanners, don’t consent to searches, ask for a lawyer, and don’t talk to the police, except maybe to tell them, “I am a Liberal, and I am against this sort of thing.”