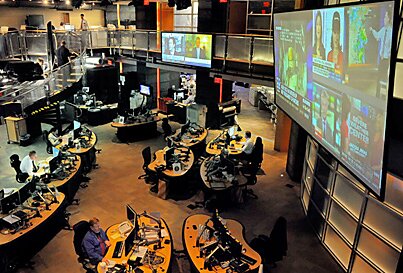 Intel-watchers have been waiting with bated breath for the launch of the Washington Post's investigative series "Top Secret America," the first installment of which appeared today, along with a searchable database showing the network of contractors doing top-secret work for the intelligence community. Despite the inevitable breathless warnings that the Post's reporting would somehow compromise national security, there's nothing online as yet to justify such fears, as even the Weekly Standard notes: The information was vetted by intel officials before being posted, and a good portion of it was already in the public domain, if not necessarily collated in such a convenient form.  Indeed, writers like Tim Shorrock, author of the invaluable Spies for Hire, have been reporting on the explosion of intelligence contracting for some time now—and in some instances the information you'll find in Shorrock's own contractor database is more usefully detailed than what the Post provides.

None of this, to be clear, should at all diminish the enormous achievement of Dana Priest and William Arkin here: The real threat of their damning exposé should be to the job security of intelligence officials and contractors.  They paint a portrait of a sprawling intelligence-industrial complex drowning in data they're unable to effectively process, and choked by redundancy:

After nine years of unprecedented spending and growth, the result is that the system put in place to keep the United States safe is so massive that its effectiveness is impossible to determine.... Analysts who make sense of documents and conversations obtained by foreign and domestic spying share their judgment by publishing 50,000 intelligence reports each year - a volume so large that many are routinely ignored.... Every day, collection systems at the National Security Agency intercept and store 1.7 billion e-mails, phone calls and other types of communications. The NSA sorts a fraction of those into 70 separate databases. The same problem bedevils every other intelligence agency, none of which have enough analysts and translators for all this work.

One retired admiral quoted in the piece complains that the much ballyhooed National Counterterrorism Center (NCTC) "had never produced one shred of information that helped me prosecute three wars." (Three?) Another anonymous official describes "60 classified analytic Web sites still in operation that were supposed to have been closed down for lack of usefulness." One really needs to read the whole piece to get the full sense of dysfunction, but I'd like to immodestly suggest that this bears out what I wrote back in May, when the Senate's report on the Christmas "underwear bomber" was released:

[Y]ou’ll notice that in the wake of such failures, the political response tends to be heavily weighted toward finding ways to collect more dots.  We hear calls for more surveillance cameras in our cities, more wiretapping with fewer restrictions, fancier scanners in the airport, fewer due process protections for captured suspects. Sometimes you’ll also see efforts to address the actual causes of intelligence failure, but they certainly don’t get the bulk of the attention.  And little wonder! Structural problems internal to intelligence or law enforcement agencies, or failures of coordination between them, are a dry, wonky, and often secret business. The solutions are complicated, distinctly unsexy, and (crucially) don’t usually lend themselves to direct legislative amelioration—especially when Congress has already rolled out the big new coordinating entities that were supposed to solve these problems last time around.

It also, somewhat orthogonally, jibes with a point Clay Shirky has pressed about complex organizations:

Complex societies collapse because, when some stress comes, those societies have become too inflexible to respond. In retrospect, this can seem mystifying. Why didn’t these societies just re-tool in less complex ways? The answer [historian Joseph] Tainter gives is the simplest one: When societies fail to respond to reduced circumstances through orderly downsizing, it isn’t because they don’t want to, it’s because they can’t.

In such systems, there is no way to make things a little bit simpler – the whole edifice becomes a huge, interlocking system not readily amenable to change. Tainter doesn’t regard the sudden decoherence of these societies as either a tragedy or a mistake—”[U]nder a situation of declining marginal returns collapse may be the most appropriate response”, to use his pitiless phrase. Furthermore, even when moderate adjustments could be made, they tend to be resisted, because any simplification discomfits elites.

The Post piece really highlights two failures: A failure of the myriad organizations and programs launched since 9/11 to produce the quantity of useful intelligence that might justify the tens of billions of dollars spent on them,  and a failure of the intelligence community's congressional overseers to provide any kind of serious accountability. As Salon's Glenn Greenwald and Wired's Spencer Ackerman both stress, both are predictable consequences of the intense secrecy surrounding intelligence work. Back in March, Ackerman quoted a former senior intelligence analyst on what he dubbed the "Coordination Myth":

that it is somehow possible to “coordinate” the work of hundreds of thousands of people across dozens of agencies operating in nearly every country of the world. Anyone who has worked in complex organizations knows, or should know, that it is possible to coordinate only a few select activities and that there are always tradeoffs, because every time you coordinate some activities you are simultaneously weakening coordination among others. To cite just one example, the creation of the National Counterterrorism Center may have enhanced interagency coordination among terrorist operators, which is a good thing, but it has surely weakened coordination between them and the country and regional experts. The net result is that the Intelligence Community is probably stronger in tactical counter- terrorist coordination but is surely weaker in strategic counterterrorism. While we are looking for the next car bomb, we may be missing the next generation of terrorist threats.

That problem is especially salient when you combine a data glut with extraordinary compartmentalization of information—justified by a mix of genuine security concerns and the interest of agencies in guarding their turf.

If we were getting this little value for our money in any other sector, you'd find no shortage of legislators eager to make the issue a personal crusade—but investing time and resources in ferreting out inefficiency in a Special Access Program is likely to be a costly endeavor with little promise of a self-congratulatory press release as a reward for one's trouble.  And that's on the generous assumption that legislators are in a position to provide much more than oversight kabuki: Intelligence briefings, as many have complained, are typically minimalist affairs where no documentation is provided and note-taking is forbidden. In practice, legislators need to rely on the specialized expertise of a handful of cleared staffers who, even when they're allowed to attend briefings, are spread gossamer thin. The intelligence agencies themselves are happy to paint any moves toward accountability as efforts to "handcuff" them—with little danger of being publicly gainsaid—and we've got 1,931 private firms with a vested interest in keeping the sluice gates jammed open.

Little wonder, then, that John McCain told Meet the Press in 2004 that "but we really don't have, still don't have, meaningful congressional oversight," or that he later remarked it was a "good year" when his Armed Services Committee appropriations panel spent ten minutes on the intelligence budget. Shamefully, even as House Speaker Nancy Pelosi strives to provide some tiny modicum of added oversight in this year's intelligence authorization bill, she's being attacked by fellow Democrats like Dianne Feinstein, and even facing a veto threat from President Obama. Legislators are happy to expand their own oversight role, of course—but for the reasons sketched above, that's unlikely to do more than provide an occasion for additional oversight theater.  The general consensus among intel scholars is that congressional oversight generally operates on a "fire alarm" model, where the exposure of some sufficiently alarming scandal prompts a brief period of intense scrutiny.  What's needed is the kind of steady "patrolling" that could be provided by greater scope for investigation by the Government Accountability Office or a well-staffed umbrella Inspector General for whole of the intel community.