Continuing our ongoing series on the wealth of Washington, we bring you the lead story in Friday’s “Mansion” section of the Wall Street Journal: 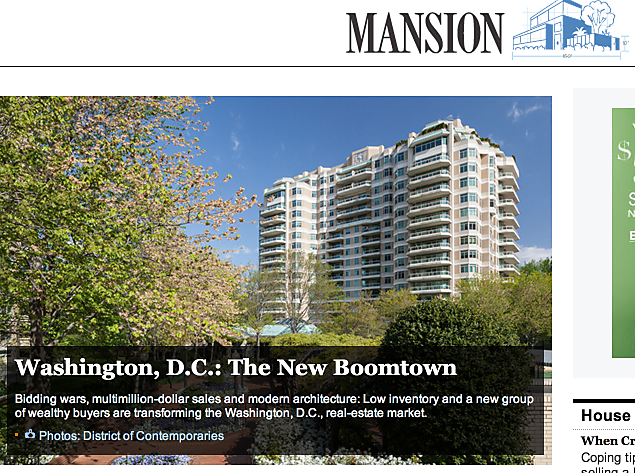 As other American cities have been buffeted by an uneven economy, Washington’s property market has been buoyed two forces specific to the capital city: a surge of federal contractors and a rising tide of government spending. The result: what real‐​estate agents and developers are calling an unprecedented real‐​estate surge.

Yes, a rising tide of government spending may be bad for the American economy, but it’s great for the Washington area.


Washington is wealthy and getting wealthier, despite history’s slowest recovery in most of the country. As we’ve said here before, this of course reflects partly the high level of federal pay, as Chris Edwards and Tad DeHaven have been detailing. And it also reflects the boom in lobbying as government comes to claim and redistribute more of the wealth produced in all those other metropolitan areas.


Money spent in Washington is taken from the people who produced it all over America. Washington produces little real value on its own. National defense and courts are essential to our freedom and prosperity, but that’s a small part of what the federal government does these days. Most federal activity involves taking money from some people, giving it to others and keeping a big chunk as a transaction fee.


Every business and interest group in society has an office in Washington devoted to getting some of the $3.6 trillion federal budget for itself: senior citizens, farmers, veterans, teachers, social workers, oil companies, labor unions — you name it. The massive spending increases of the Bush‐​Obama years have created a lot of well‐​off people in Washington. New regulatory burdens, notably from Obamacare, are also generating jobs in the lobbying and regulatory compliance business.


Walk down K Street, the heart of Washington’s lobbying industry, and look at the directory in any office building. They’re full of lobbyists and associations that are in Washington, for one reason: because, as Willie Sutton said about why he robbed banks, “That’s where the money is.”


The wonder is why the taxpayers put up with it.