The Wall Street Journal provides a page of charts today illustrating the remarkable weakness of the current U.S. economic recovery. A twin story in the paper provides comments on the recovery from two of the nation’s top macroeconomists:

Taken together many economists agree on how this recovery stacks up: “It is the worst, no question about it,” says Robert Gordon, a Northwestern University professor and a member of the National Bureau of Economic Research’s business cycle dating committee, which is widely considered the official arbiter of the beginning and end of recessions. His colleague, Stanford professor Robert Hall, who runs the committee, says it’s “absolutely right” that this is the worst recovery yet.

Yet this was the recovery that was aided by the largest Keynesian‐​style big government “stimulus” since World War II. Since 2008, total federal “stimulus” has been $4.6 trillion, as shown in the chart. As a share of GDP, recent deficit spending has been far greater than during all other recessions since the war.


That math seems pretty straightforward to most people, but not to one of Obama’s chief economic architects. 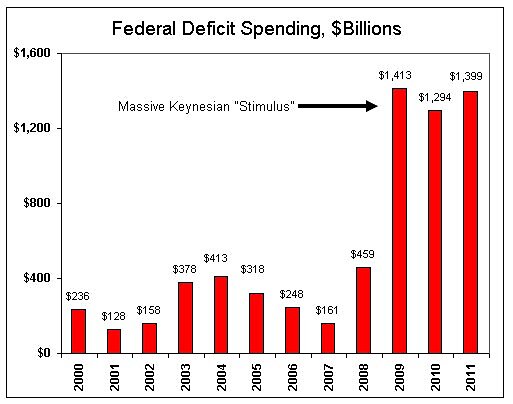