Last night Venezuela’s Bolivarian Intelligence Service (SEBIN) arrested Rodrigo Diamanti, president of “Un Mundo sin Mordaza” (A World Without Gag), an NGO that promotes human rights and freedom of expression in that country. Diamanti is also a good friend of the Cato Institute and attended the Cato University that we co‐​hosted in Venezuela in 2009.


No charges have been filed, although reportedly he had an arrest warrant against him. Two weeks ago, while visiting Caracas to run another Cato University and speak at a conference of the pro‐​liberty think tank Cedice, my colleague Ian Vásquez and I got to talk to Rodrigo and other Venezuelan friends who were part of the student movement that defeated Hugo Chávez in a referendum in 2007. They told us how the government was increasingly harassing NGOs. Sadly, we noticed that many of the guys that attended that Cato University in 2009 have left Venezuela. Those who stayed and continue to fight against the increasingly authoritarian government face the consequences.


Also, early this morning the Bolivarian National Guard violently took over two camps in downtown Caracas where students had been staging a permanent protest against the government. The authorities claim they arrested 243 people. I visited both camps and met several of the students there. One of them, Maria Alejandra, 23, told me she had an arrest warrant against her and woke up every day not knowing whether she would be free –or even alive—by the end of the day. I haven’t been able to contact her today and I’m afraid she’s among those detained during today’s raid.


The crackdown comes at a time that the government is holding phony dialogue meetings with a sector of the opposition. Yesterday a poll by Datanálisis found that 78% of Venezuelans are pessimistic about the situation of the country and 59% thinks that president Nicolás Maduro is doing a bad job. The trend is clear: As the popularity of the regime dwindles, its authoritarianism increases. 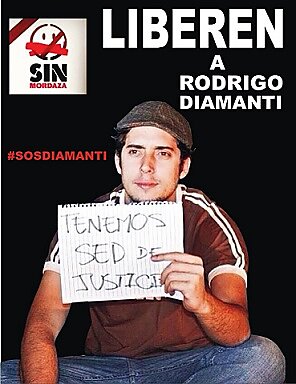