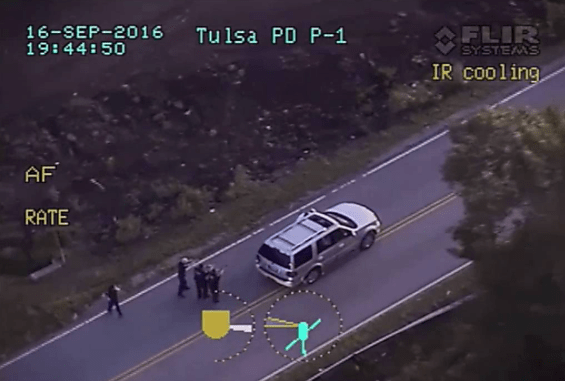 Yesterday, police in Oklahoma released aerial and dash camera footage of an unarmed man named Terence Crutcher being shot by an officer as he stood beside his SUV. Tulsa Police Chief Chuck Jordan described the footage as “very difficult to watch,” and the officer who shot Crutcher is on administrative leave. The aerial footage of the shooting ought to remind us how important transparency policy is in the age of the “Pre‐​Search” and the role persistent aerial surveillance may come to play in police misconduct investigations.


Reporting from earlier this year revealed that police in Baltimore have been testing persistent aerial surveillance technology, described by its developer as “Google Earth with TiVo,” which allows users to keep around 30 square miles under surveillance. The technology, developed by Persistent Surveillance Systems (PSS), has helped Baltimore police investigate thefts and shootings. But the trial was conducted in secret, without the knowledge of key Baltimore city officials, and was financed by a billionaire couple.


Shortly after news of the persistent surveillance in Baltimore was reported I and others noted that it should cause concern. Citizens engaged in lawful behavior deserve to know if their movements are being filmed and tracked by police for hours at a time. Yet, as disturbing as the secretive persistent surveillance in Baltimore is, technology already exists that is far more intrusive.

PSS’ surveillance allows analysts to track individuals, but not to see any of that individual’s identifying features. On the massive image put together by PSS one individual takes up one pixel. ARGUS-IS, a persistent surveillance system designed for the military, mounted on a drone or aircraft at 20,000 feet allows users to see 6 inch details in a 1.8 billion pixel image showing a 10 square mile area. When ARGUS-IS technology is incorporated into Gorgon Stare, another surveillance system, the coverage area expands to about 39 square miles. A video highlighting ARGUS-IS’ capabilities is below:

It’s currently not feasible for most American law enforcement agencies to use Gorgon Stare and other military surveillance equipment given the cost. However, domestic law enforcement has not been shy about using military equipment, and technological advances suggest that we should be asking “when” questions, not “if” questions, when discussing police using persistent aerial surveillance tools that capture highly detailed images.

For its part, the police department denies that officers have done anything wrong, or that the planes even amount to a form of surveillance. TJ Smith, media relations chief for the Baltimore Police Department, told VICE the aerial program “doesn’t infringe on privacy rights” because it captures images available in public spaces.


I’ve written before about how aerial surveillance Supreme Court cases from the 1980s grant police a great deal of freedom when it comes to snooping on citizens from the sky. Lawmakers can provide increased privacy and restrict the kind of persistent aerial surveillance that has been taking place in Baltimore. However, if lawmakers want to allow for constant “eyes in the sky” they should at least take steps to ensure that persistent surveillance equipment is used to increase police accountability and transparency, not just to aid criminal investigations. As body cameras have shown, police tools can help law enforcement and criminal justice reform advocates, but only if the right policies are in place.