In their tax plan released today, Republicans have abandoned their effort to cut the top individual income tax rate of 40 percent. That is unfortunate, because the highest tax rates do the most economic damage. Apparently, the GOP backtracked on that reform because of revenue concerns, and because of fear of “tax cuts for the rich” complaints from liberal critics. The critics will probably make similar complaints about the new plan.


Liberals always seem to want more taxes on the rich and more redistribution, no matter how much we already have. The United States already has the most “progressive” system of household taxes in the OECD. At least, that is what the OECD found in a 2008 study, Chapter 4. Among the 24 countries they examined, they found that “Taxation is most progressively distributed in the United States.” That is probably still true today.


The table below is a compressed version of one from the OECD report. The column on the left shows the percent of taxes paid by the highest‐​earning 10 percent of households. The OECD includes individual income taxes and employee social security taxes. At 45 percent, the top 10 percent in the United States pay the highest tax share of any OECD country.


Partly, that is because the top 10 percent of Americans earn a large share of the income, as shown in the second column. But, it is also because our government nails high earners with high rates, which is what the third column reveals. The third column is the ratio of the first and second columns, and is one measure of how “progressive” the tax system is. A ratio of “1.00” would be proportionality, where the top 10 percent of earners pay 10 percent of the taxes, which is the case in Sweden.


The U.S. has the highest third‐​column ratio at 1.35, which indicates substantially more progressivity than the OECD average of 1.11. “Progressivity” sounds like a nice thing, but it means a system than penalizes people more the harder they work, and it means a system that is unfair to the most productive people in the economy. 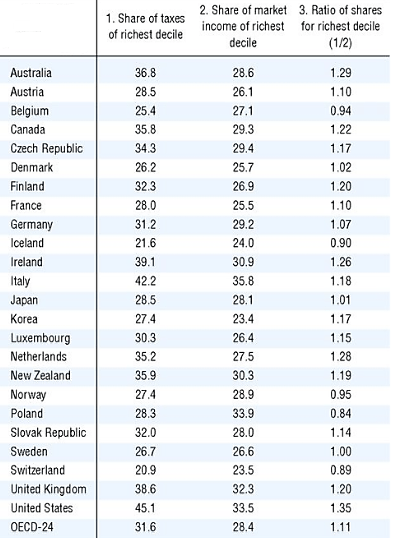