If you have followed the tax debate, you know that the United States has one of the highest corporate tax rates in the world. Most other nations have slashed their rates to attract investment, while U.S. policymakers have been in denial about global tax competition until recently.


You may be less familiar with the cuts to top individual income tax rates around the world since the 1980s. Those reforms have been driven by international competition for skilled workers, and by growing recognition of the damage caused by penalizing the highly productive people who are top earners.


How much have top individual tax rates been cut? The Economic Freedom of the World report publishes tax rate data for more than 100 countries as far back as the 1970s, but with numerous data points missing. I found 80 countries that had data back to 1985, and below I chart the average top individual income tax rate for that group. For countries with subnational income taxation, the EFW report includes a range of rates reflecting the varying taxes in states and provinces. For the chart, I chose the highest subnational rates for those countries. For the United States, the U.S. rate for 2015 is the federal rate plus California.


Our top rate went back up in the 1990s, then down in the 2000s, then up again in recent years reaching 51 percent by 2015, as both the federal and California rates increased. Meanwhile, rates continued to fall around the world in the 1990s and 2000s until the tax‐​cutting trend tapered off in recent years. 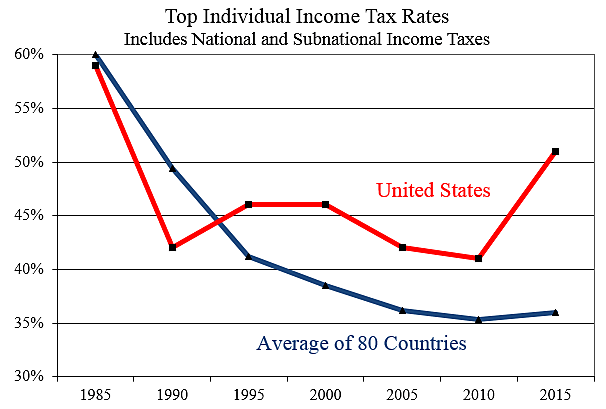 Note: The EFW dataset has 159 countries with individual income tax data for 2015. The overall average top rate was just 30 percent for those countries. For the subset of 80 countries, I took out countries with zero rates, such as Bahamas, and countries that did not have data for 1985.