The Tyranny of Confusion: A Response to Prof. Djavad Salehi‐​Isfahani on Iran

In October 2012, I first reported that Iran had experienced hyperinflation. My diagnosis of Iran’s inflation woes has since drawn the ire of Prof. Djavad Salehi-Isfahani, who has written a series of blogs and articles disputing my analysis. Prof. Salehi-Isfahani, an economist at Virginia Tech, has employed a confused (and confusing) mix of half-baked methodologies and selected data to yield unfounded, preposterous claims. Specifically, he claims that Iran never experienced a brief bout of hyperinflation and that Iran’s inflation rate is much lower than the estimates reported by virtually everyone except Iran’s Central Bank. To borrow Jeremy Bentham’s phrase, Prof. Salehi-Isfahani’s claims constitute a series of “vulgar errors.”

What has puzzled me for the past few months is why Prof. Salehi-Isfahani has been so hell-bent on denying Iran’s inflation problems. But finally, in his most recent article in Al Monitor, he showed his hand, revealing his underlying thesis – the same claim propagated by the Iranian regime – that the sanctions imposed by the West have not inflicted economic damage on Iran to the extent that has been reported.

In his most recent blog, Prof. Salehi-Isfahani finally abandons his own confused attempts to calculate Iran’s inflation rate. For his readers, this is a relief, as the variety of methods with which he attempted to calculate inflation in Iran amount to nonsense – and not even good nonsense.

Now, Prof. Salehi-Isfahani simply accepts the Central Bank of Iran’s official CPI inflation rate – an annual inflation rate of only 27.4%. Never mind that this statistic runs counter to all serious analysis of Iran’s inflation problems. And yes, Iran’s official inflation statistics are also contradicted by the overwhelming body of reports in the financial press on Iran’s recent burst of inflation – such as accounts of the skyrocketing costs of goods and services like chicken, milk, plane tickets, etc.

As I have documented, regimes in countries undergoing severe inflation have a long history of hiding the true extent of their inflationary woes. In many cases, such as the recent hyperinflation episodes in Zimbabwe and North Korea, the regimes resort to underreporting or simply fabricating statistics to hide their economic problems. Often, they stop reporting economic data all together; or, when they do report economic statistics, they do so with such a lag that the reported data are of limited use by the time they see the light of day.

Iran has followed this course – failing to report any usable monetary data since March 2011 and neglecting to report CPI data in a timely and replicable manner. Those data that are reported by Iran’s Central Bank tend to possess what I’ve described as an “Alice in Wonderland” quality. In light of this, the numerous reports that contradict the Iranian Central Bank’s official CPI inflation rate, and the heavy-handed manner in which the regime has attempted to suppress currency trading on the black market, it is fair to suggest that any official data on Iran’s inflation be taken with a grain of salt.

The key lies in the exchange rate. As Nobel laureate Robert Mundell demonstrated, the exchange rate is, in principle, a determinant of the demand for money (Mundell, 1963). Subsequent empirical research on the nexus between the rial’s exchange rate and Iran’s inflation has verified that Mundell’s conjecture holds for Iran (Bahmani-Oskooee 1996). In short, there is a positive feedback loop, where depreciation of the rial and domestic inflation drive expectations of future inflation, leading to further depreciation of the rial, and so on…

The relationship between the exchange rate and prices is widely accepted to be given by the principle of purchasing power parity (PPP). This states that the exchange rate between two countries is equal to the ratio of their relative price levels. So, if we have relevant exchange-rate data, it is possible to calculate a reliable implied inflation rate for the country in question.

As Jacob Frenkel (1976) first demonstrated, in the case of Weimar Germany, this relationship between the exchange rate and the price level is particularly strong when inflation accelerates towards hyperinflation. This has also been shown to hold true in a number of other cases (see: McNown and Wallace 1989; Phylaktis 1992; Mahdavi and Zhou 1994; Zhou 1997; and Bleaney 1998). I have also demonstrated the robustness of this linkage in Zimbabwe – a country that experienced the world’s second-worst hyperinflation, with a monthly inflation rate that peaked in mid-November 2008 at 79,600,000,000% (Hanke and Kwok 2009).

In short, changes in the exchange rate will yield a reliable implied inflation rate, in cases of extreme inflation.  So, to calculate the inflation rate in Iran, a rather straightforward application of standard, time-tested economic theory is all that is required.

But, according to Prof. Salehi-Isfahani, things aren’t so straightforward in Iran. After all, as he points out, Iran employs a multiple-exchange-rate regime. In consequence, he argues, a standard PPP calculation will not work for Iran.

The irony of Prof. Salehi-Isfahani’s fixation on the multiple-exchange-rate regime is that Iran’s September 2012 reworking of its currency regime is, itself, indicative of inflation problems. In fact, one reason for mandating multiple exchange rates for different types of good and services is to protect official foreign exchange reserves from the negative shocks associated with surges in capital outflows. If the rial was floating on a sea of tranquility, as Prof. Salehi-Isfahani claims, there would be no need for a multiple-exchange-rate regime.

At the end of the day, and after several months and multiple iterations, Prof. Salehi-Isfahani’s critique of my estimate of Iran’s hyperinflation can be distilled to a few fallacious rhetorical tactics. For starters, his repeated denials of Iran’s inflationary woes have come to constitute an argument ad nauseam. By repeating his claim and “supporting” it with a series of pseudo-economic exercises, he simply generates noise – further obscuring the truth about the rial crisis.

Moreover, Prof. Salehi-Isfahani has made repeated allusions to his Persian pedigree (e.g. his recent cab ride in Tehran – the well-worn “taxi cab fallacy”, consumer price quotes from “friends and family” in Neishabour, etc.). These are simply rhetorical tools that allow Prof. Salehi-Isfahani – by citing his unique “insights” – to sidestep both scholarly evidence and reportage in the financial press that contradict his claims.

Prof. Salehi-Isfahani repeated this pattern of whitewashing Iran’s inflation problems in his most recent blog. This has led some observers, such as Prof. Scott Lucas, to question how Prof. Salehi-Isfahani can continue to write articles downplaying Iran’s inflation problems, without so much as mentioning the recent flap involving the governor of Iran’s Central Bank, Mahmoud Bahmani. After all, in the two days following official reports that Bahmani had attempted to retire from his post, the rial lost up to 8% of its value against the U.S. dollar. So much for the stable rial.

Prof. Salehi-Isfahani’s problem is that, when it comes to the rial crisis, economic theory and empirical evidence are simply not on his side. For all his sophistry, he has ultimately failed to refute the fact that the collapsing rial has sent Iran into an inflationary spiral, which was punctuated by a brief period of hyperinflation, in October.

When we separate the signal from the noise, we are simply left with the black-market exchange-rate data and a well-established methodology (PPP) with which to determine an implied inflation rate. Now, let’s allow the data to speak for themselves: 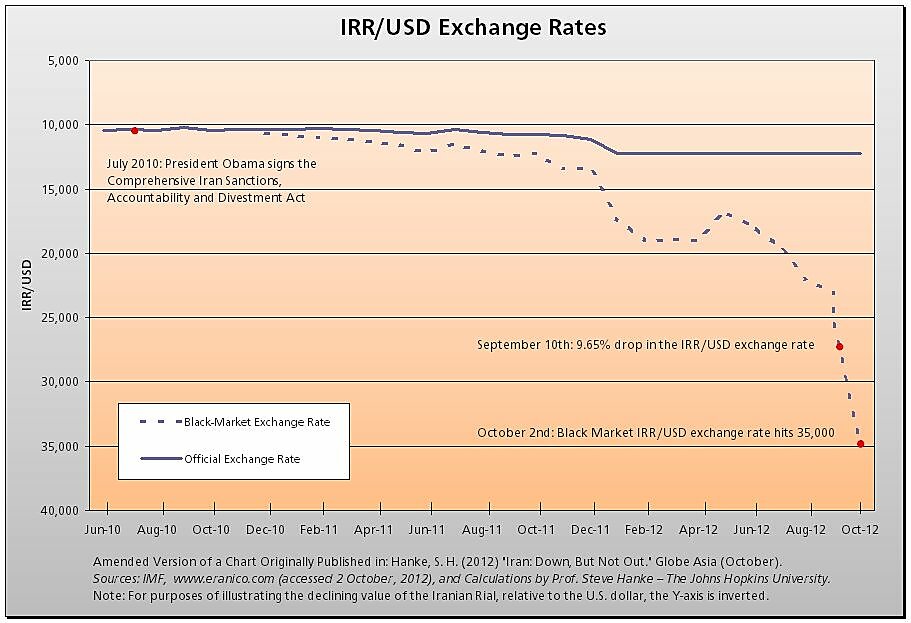 • For the year 2012, Iran experienced very high inflation. As the accompanying chart shows, Iran’s year-end, annual inflation rate was 110%. This implied inflation rate holds both when calculated using the black-market IRR/USD exchange rate and using the relative price of gold. 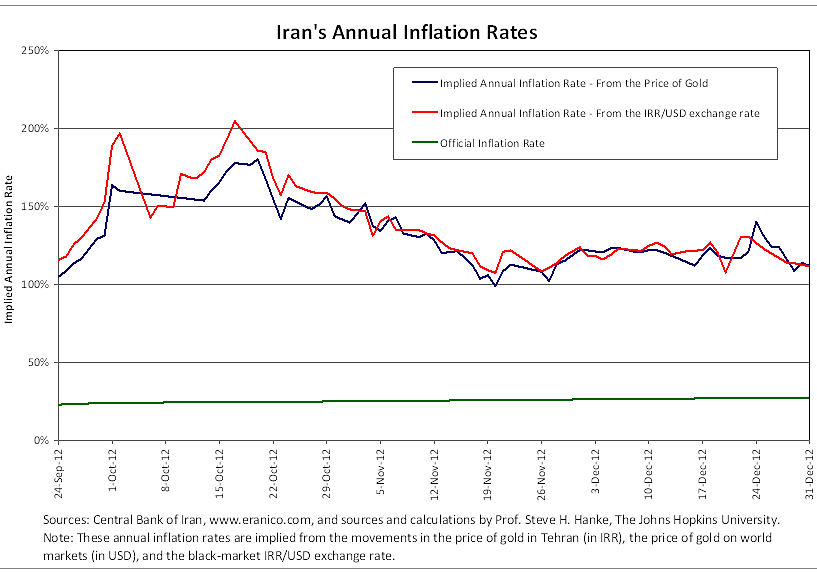 Ultimately, we are left with a picture of Iran’s inflation that stands in stark contrast to the one being peddled by Prof. Salehi-Isfahani. Indeed, his blogs and articles validate a maxim in economics that I have often borrowed from one of my former professors, Armen Alchian: 95% of what you read that passes for economics is either wrong or irrelevant. When it comes to Iran’s hyperinflation, Prof. Djavad Salehi-Isfahani’s writings are both.