On the campaign trail a few years back, Hillary Clinton declaimed: “We need a president who is ready on Day 1 to be commander in chief of our economy.” We got a good laugh out of that here at Cato—what a megalomaniacal misconception of the job! When President Trump embraced the role last Friday, it somehow seemed less amusing. “Our great American companies are hereby ordered to immediately start looking for an alternative to China,” he brayed, sending the markets into a Twitter‐​driven tailspin. 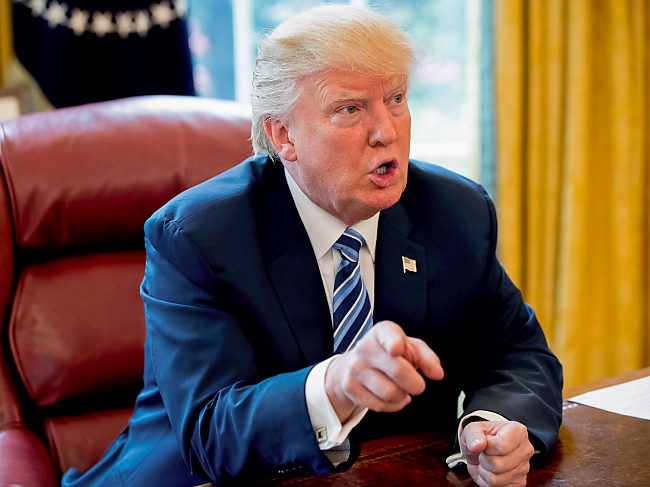 Where does Trump derive the authority for that “order”? On Saturday, he followed up with a statutory citation for the haters: “try looking at the Emergency Economic Powers Act of 1977. Case closed!”


True, President Trump makes a lot of crazy threats he never carries out: from revoking birthright citizenship, to closing the border, to using the same 1977 Act to hammer Mexico with across‐​the‐​board tariffs, as Trump threatened to do in May. There’s a pattern here: the president sounds his barbaric yawp over the roofs of the world, but before long, backs it down to an ineffectual grumble. In this case, the cycle took all of two days: “I have the right to, if I want,” Trump insisted Sunday, but “I have no plan right now. Actually, we’re getting along very well with China.” OK, then: never mind!


But we’d be fools to shrug this episode off as another unsettling, but ultimately meaningless Trumpian brainspasm, like nuking hurricanes or buying Greenland. For decades now, Congress has defined national emergencies downwards, investing the executive branch with dangerous new powers the president can trigger by saying the magic words. Trump has only begun to explore the possibilities, and there may be more competent would‐​be authoritarians waiting in the wings.


The statute Trump specified, the International Emergency Economic Powers Act of 1977 (IEEPA), gives the president an imposing array of unilateral powers to deploy against “any unusual and extraordinary threat, which has its source in whole or substantial part outside the United States” if he “declares a national emergency with respect to such threat.” Granted, Trump’s definition of “emergency” may differ from yours, mine, and the dictionary’s. “For many years, this has been going on,” he explained Sunday, “in many ways, that’s an emergency.” But if history is any guide, federal judges will be extremely reluctant to second‐​guess “the wisdom of the President’s judgment concerning the nature and extent of [the] threat.”


So, “case closed”? Could Trump order U.S. companies to pack up and come home? Not quite; but he could make it extremely difficult for them to do business in and with China. The IEEPA gives the president staggeringly broad powers to block transactions and freeze assets in which any foreign government or foreign national has an interest. And Trump’s not wrong to think he might get away with using the law as a trade‐​war bludgeon. A Congressional Research Service report published two months before Trump first started threatening to use IEEPA to hike tariffs, opined that such a use was unlikely, but probably permissible.


The National Emergencies Act of 1976, the framework statute that was supposed to rein in presidential emergency powers, won’t be much help either. It originally allowed Congress to terminate presidential emergencies by majority vote, but thanks to a 1983 Supreme Court decision, the law now requires termination via joint resolution, subject to the president’s veto. Under the current emergency‐​powers regime, then, the president gets to do what he wants unless a congressional supermajority can be assembled to stop him.

The good news is that Trump’s norm‐​busting on emergency powers has spurred a bipartisan reform effort in Congress. On July 24, the Senate Homeland Security and Governmental Affairs Committee moved an important emergency‐​powers reform bill forward by an 11–2 majority. That bill, Senator Mike Lee’s (R‐​Utah) ARTICLE ONE Act, would amend the National Emergencies Act to void new emergency declarations within 30 days unless Congress affirmatively approves them. Once approved, new emergency declarations require annual reapproval by Congress. The A-1 Act thus changes the current default setting—the president proposes, and the president disposes—to one in which any emergency edicts he issues rapidly expire without legislative sanction.


The A-1 Act also addresses IEEPA abuse: thanks to an amendment offered by Senator Tom Carper (D-DE) and approved by voice vote, it would restrict the president’s ability to use the 1977 law to hike tariffs. The IEEPA, it clarifies, “does not include the authority to impose duties or tariff‐​rate quotas or… other quotas on articles entering the United States.”


That’s an important change, but it comes with a pretty significant exception: even under the Carper amendment, the president can use the IEEPA for blanket bans of “all articles, or all of a certain type of article, imported from a country from entering the United States.” Nor would authorities claimed under the IEEPA sunset 30 days after the declared emergency. The A-1 Act exempts IEEPA emergencies from the new framework; they remain renewable at‐​will by the president unless affirmatively repealed by Congress over the president’s veto.


All but three of the 34 currently active national “emergencies” rest on the 1977 law. The case for an IEEPA carve‐​out is that the bulk of those 31 are fairly uncontroversial, and requiring yearly congressional reapprovals would be cumbersome. That case was far more compelling before President Trump started threatening to weaponize IEEPA against major trading partners and the American consumer.


Even so, the ARTICLE ONE Act would constitute a major improvement over the current emergency powers regime, and a possible foundation for future reforms. The courts are unlikely by themselves to impose the necessary restraints. It’s Congress that got us into this mess, and it’s going to be up to Congress to get us out.