His brand is crisis, so it can be hard to keep abreast of the various calamities President Trump stumbles into or deliberately courts. Now that tensions with Iran seem to have momentarily cooled, another recent episode of Trumpian brinksmanship, closer to home, deserves some attention before we lurch forward into new dangers.

As you’ve surely heard, but may have already forgotten amid the fog of near-war, three weeks ago, President Trump threatened to declare yet another national emergency at the southern border. If Mexico didn’t sufficiently crack down on cross-border migration, Trump warned, he’d use “the authorities granted to me by the International Emergency Economic Powers Act” to hammer our third largest trading partner—and U.S. consumers—with a series of escalating tariffs on Mexican goods, rising to 25 percent across the board.

Fortunately, on June 7, three days before the deadline he’d set, President Trump called off the trade war. But, Trump warned, he “can always go back” to raising tariffs if he’s not happy.

The notion that the president can, with the stroke of a pen, upend peaceful trade relations and implement a massive tax hike ought to sound the alarm about Trump’s expansive view of presidential emergency powers. Are they as vast as the president claims, and, if so, what can Congress do to rein them in? 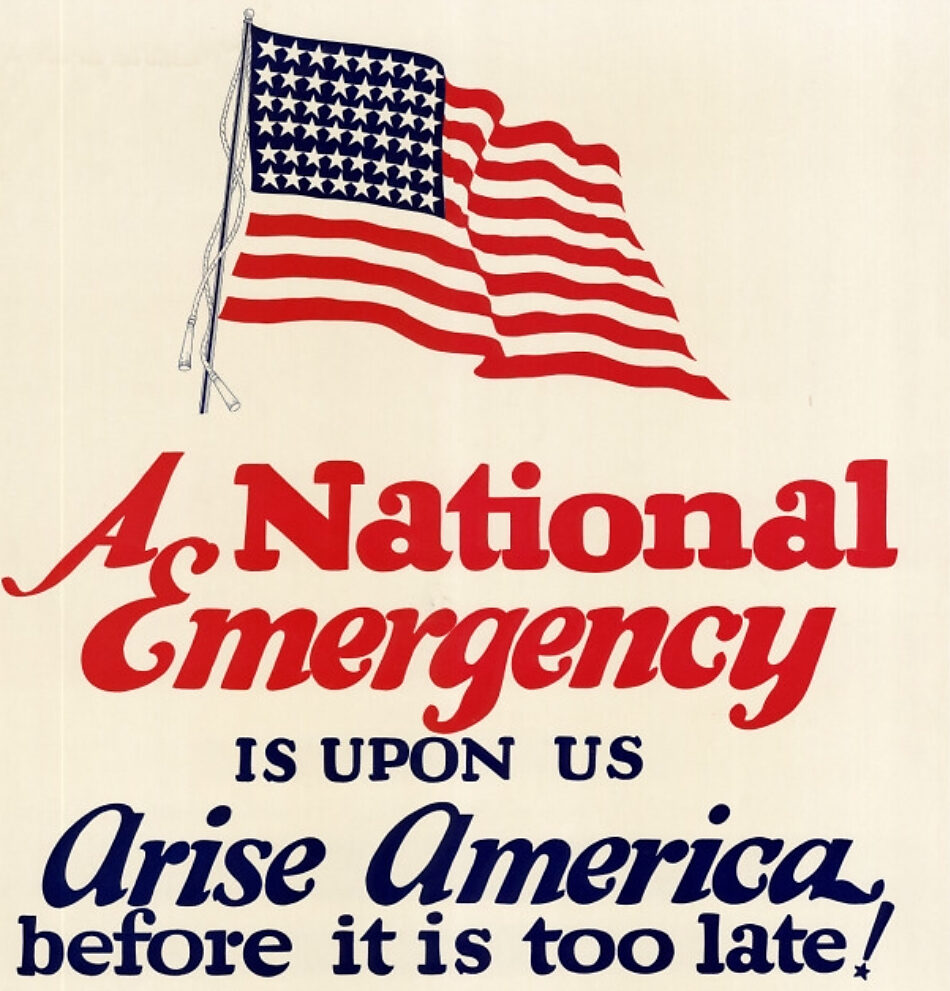 As I argued in Reason magazine recently, our latest Imperial President has aggressively exploited the powers he inherited, but hasn’t been much of an innovator in terms of devising genuinely new schemes for the expansion of executive power. Trump’s use of emergency authorities is the glaring exception to that pattern, the key area in which the “CEO president” has been menacingly entrepreneurial.

We saw this first in February, when President Trump declared a national emergency in order to “build the wall” on the U.S.-Mexico border. The statute Trump invoked, 10 USC § 2808, allows the president to divert funds to “military construction projects” supporting the use of U.S. armed forces in a military emergency. It had been used only twice before, by George H.W. Bush in the run-up to the Gulf War, and by his son in the aftermath of the 9/11 attacks—the sort of circumstances it was clearly designed to address. Though past presidents had used emergency powers liberally, before Trump, it apparently hadn’t occurred to anyone that you could use them to snatch funding for a pet project that Congress had repeatedly refused to support.

Nor had the International Emergency Economic Powers Act of 1977 (IEEPA), the statute Trump brandished against Mexico earlier this month, ever been used to impose tariffs—much less on a friendly major trading partner. The IEEPA cedes sweeping authorities to the president during a declared national emergency, but up till now presidents have mainly used it as an all-purpose sanctions tool against so-called “rogue states” and various international bad guys like drug kingpins, computer hackers, and terrorists.

On its face, the statute doesn’t read like a delegation of the power to set trade policy. It gives the president the power to “investigate, regulate, and prohibit” various international transactions, but says nothing about imposing duties or restricting imports. Even so, it’s entirely possible President Trump could get away with using the IEEPA as a trade-war weapon. As Scott R. Anderson and Kathleen Claussen explain at the Lawfare blog, there’s “some precedent for using IEEPA-like authorities to impose tariffs.” In 1971, President Nixon used a predecessor statute with similar language, the Trading with the Enemy Act, to hike tariffs on all imports by 10 percent, and a federal appeals court upheld the move.

If we don’t want the president to have the power to do an end-run around Congress in budget battles or launch a trade war from his couch, Congress needs to get serious about reining in the emergency powers it’s foolishly delegated. Reforming the framework statute governing those powers is the place to start.

The National Emergencies Act of 1976 (NEA) requires the president to formally declare national emergencies, specifying the statutory powers he claims, and it sunsets those declarations after one year unless the president renews them. The NEA originally allowed Congress to terminate emergencies earlier, by a majority vote of both houses. But since the Supreme Court struck down the “legislative veto” in 1983, the law now requires termination via joint resolution, subject to the president’s veto. The upshot is that national emergencies are “easy to declare and hard to stop,” as the Brennan Center’s Elizabeth Goitein puts it: once declared, presidents can renew them at will unless Congress can muster a veto-proof majority for disapproval. That turns the legislative process on its head: the president proposes, and the president disposes.

Several bills introduced this year would reverse the presumption that emergencies continue indefinitely unless a congressional supermajority can be assembled to stop them: Rep. Tom Reed (R-NY)’s Guarding Congressional Authority Act, Sen. Mike Lee’s (R-UT) ARTICLE ONE Act (for ‘‘Assuring that Robust, Thorough, and Informed Congressional Leadership is Exercised Over National Emergencies’’) and, introduced June 12 by Senators Rand Paul (R-KY) and Ron Wyden (D-OR), the REPUBLIC Act (for “Reforming Emergency Powers to Uphold the Balances and Limitations Inherent in the Constitution”). (On the Senate side, they budget for creative acronyms).

All three bills would amend the NEA to sunset any new emergency declaration unless it’s affirmatively approved by Congress within a specific time limit: 60 days in Rep. Reed’s bill, 30 in Sen. Lee’s, and just 72 hours under Paul-Wyden. Per Senator Lee’s bill, emergencies that garner congressional authorization terminate after one year unless Congress reauthorizes them; under the Paul-Wyden REPUBLIC Act, they need reauthorization every 90 days.

The REPUBLIC Act improves on Senator Lee’s bill in several ways. In addition to imposing shorter time limits, it would terminate Trump’s border-wall emergency immediately; under the ARTICLE ONE act, the president would get a year to shift funds before congressional authorization is required. The Paul-Wyden bill also specifically repeals one of the most dangerous emergency powers lurking in the U.S. Code: Section 706 of the 1934 Communications Act, which allows the president to seize or shut down “‘any facility or station for wire communication’ upon his proclamation ‘that there exists a state or threat of war involving the United States.’” As Elizabeth Goitein notes, “Section 706 could effectively function as a ‘kill switch’ in the U.S.—one that would be available to the president the moment he proclaimed a mere threat of war. It could also give the president power to assume control over U.S. internet traffic.” Paul-Wyden would kill the “kill switch.”

Perhaps the bill’s sole defect is that it would leave the potential for IEEPA abuse very much alive. Drafted before Trump’s recent Mexican-tariff standoff, the REPUBLIC Act specifically exempts emergency declarations based on the IEEPA. They remain subject to the current NEA rules, renewable by the president yearly unless specifically repealed by Congress.

The senators’ rationale for that is understandable: thirty of the 33 ongoing “national emergencies” are IEEPA-based sanctions, most of them fairly uncontroversial. Without the carve-out, Paul-Wyden’s tighter time limits would “require Congress to vote every 90 days to continue sanctions on North Korea, Iran, transnational crime organizations, etc.”

If that’s too often, then allowing a one-year renewal after legislative approval would be a safer concession than exempting the IEEPA entirely. Trump’s tariff threat suggests we can’t always count on presidents to restrain themselves from abusing the broad powers the IEEPA cedes.

Surprisingly enough, presidential restraint has been a key factor in keeping our emergency-powers regime from reaching its full potential for abuse. As Goitein testified recently:

while nothing in the National Emergencies Act would prevent presidents from using emergency declarations to access dozens of special powers unrelated to the emergency at hand, presidents have not exploited that license. The Brennan Center’s research indicates that nearly 70% of the powers available to the president when he invokes a national emergency have never been invoked.

Trump’s “norm-busting” on emergency powers threatens to change all that. Our 45th president has demonstrated that the U.S. Code is honeycombed with untapped unilateral powers. Few, if any, of his would-be successors are averse to rule by decree, and the next president will almost surely be a smoother, more capable hand at managing executive-power grabs. Instead of hoping for presidential forebearance, Congress should impose the necessary restraints itself.

Of course, President Trump can be expected to veto any law that ends his border-wall emergency or restricts his ability to use the IEEPA for tariffs. Effective emergency powers reform will itself require supermajority support. Their recent failure to overturn Trump’s border-wall declaration suggests that Congress isn’t quite there yet. But given the rising threat of emergency governance, building that consensus is vital.