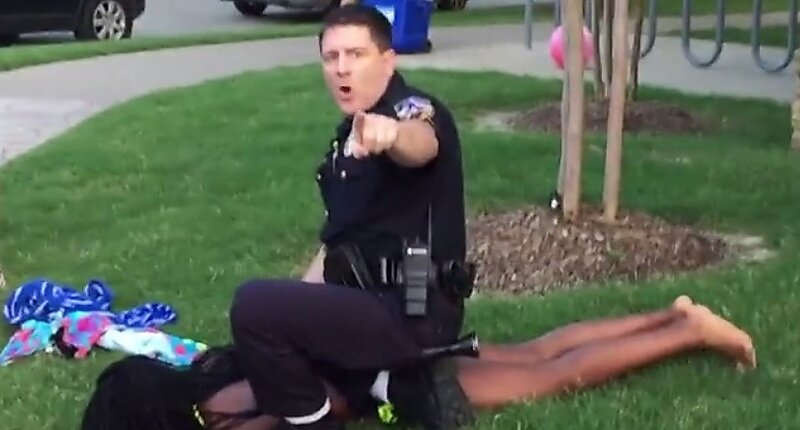 Last Friday a group of teenagers attended an end‐​of‐​year party at a community swimming pool in McKinney, Texas. According to some of the teens at the pool police were called to the scene after adults made racist remarks and a fight between adults and the teens began. A McKinney Police Department Facebook post states that officers responded to reports of “a disturbance involving multiple juveniles” who did not have permission to be at the pool.


One of the teens, 15‐​year‐​old Brandon Brooks, filmed the encounter between the youths and police officers. The video, which can be viewed below, shows officer Eric Casebolt handcuffing two teens before throwing a 14‐​year‐​old girl to the ground, using his knees to pin her, and pulling a gun on unarmed bystanders — something he is caught on camera denying. The girl was later released without charge.

Casebolt, who has been placed on administrative leave following the incident, was named Patrolman of the Year in 2008 and is reportedly a vice president of the McKinney police union. He was also once an instructor at Executive Self‐​Defense and Fitness, and was described on that company’s website as someone with “experience in the use of all levels of force” and “a strong working knowledge of human behavior.”


It is hard to imagine the incident earning as much attention as it has without Brooks’ footage, which serves as another reminder of how important it is that citizens film the police. In the forthcoming investigation into the incident Casebolt will not be able to plausibly claim that he felt threatened by a 14‐​year‐​old girl and that his use of force against her was justified. Nor will he be able to claim that he did not unholster his weapon and point it at unarmed teens.


Citizen footage of police officers can be instrumental in investigations into allegations of police misconduct. Today a grand jury indicted former North Charleston, South Carolina police officer Michael Slager for the killing of Walter Scott, whose death was caught on camera by an onlooker. Scott was shot multiple times in the back while running away from Slager. I wrote about Walter Scott’s death in April, noting how footage of the killing contradicted what was included in police reports.


The Cato Institute released a video on citizens filming police officers in 2010. It can be viewed below.