As promised, we report here on yet another published estimate of the earth’s equilibrium climate sensitivity that is towards the low end of the United Nations’ Intergovernmental Panel on Climate Change (IPCC) range of possibilities.

Recall that the equilibrium climate sensitivity is the amount that the earth’s surface temperature will rise from a doubling of the pre-industrial atmospheric concentration of carbon dioxide. As such, it is probably the most important factor in determining whether or not we need to “do something” to mitigate future climate change. Lower sensitivity means low urgency, and, if low enough, carbon dioxide emissions confer a net benefit.

And despite common claims that the “science is settled” when it comes to global warming, we are still learning more and more about the earth complex climate system—and the more we learn, the less responsive it seems that the earth’s average temperature is to human carbon dioxide emissions.

The latest study to document a low climate sensitivity is authored by independent scientist Nic Lewis and is scheduled for publication in the Journal of Climate. Lewis’ study is a rather mathematically complicated reanalysis of another earlier mathematically complicated analysis that matches the observed global temperature change to the temperature change produced from a simple climate model with a configurable set of parameters whose actual values are largely unknown but can be assigned in the model simulations. By varying the values of these parameters in the models and seeing how well the resulting temperature output matches the observations, you can get some idea as to what the real-world value of these parameters are. And the main parameter of interest is the equilibrium climate sensitivity. Lewis’ study also includes additional model years and additional years of observations, including several years from the current global warming “hiatus” (i.e., the lack of a statistically significant rise in global temperature that extends for about 16 years, starting in early 1997).

We actually did something along a similar vein—in English—and published it back in 2002. We found the same thing that Lewis did: substantially reduced warming. We were handsomely rewarded for our efforts by the climategate mafia, who tried to get 1) the paper withdrawn, 2) the editor fired—not just from the journal, but from Auckland University, and 3) my (Michaels) 1979 PhD “reopened” by University of Wisconsin.

Lewis concludes that the median estimate of the equilibrium climate sensitivity is 1.6°C, with a 90% range extending from 1.0°C to 3.0°C. (That’s almost exactly what we found 11 years ago.)

Based on this result, we welcome Lewis (2013) to the growing list of results published in the scientific literature since 2010 which find the climate sensitivity to be on the low side of the IPCC. God knows what the climategaters are emailing today.

Figure 1 illustrates all the new results as well as the IPCC’s take. 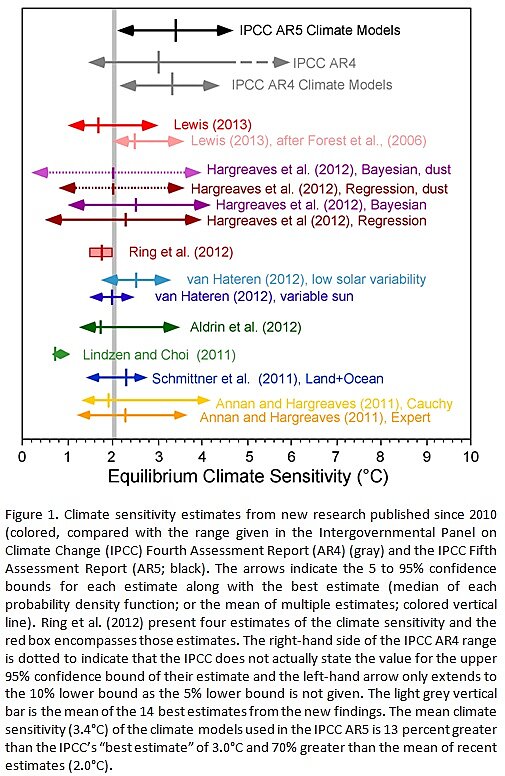 Take special note of the new findings (and their mean) in relation to the black bar at the top labeled “IPCC AR5 Climate Models.” Of the 19 state-of-the-art climate models used in the IPCC’s newest Assessment Report (which is still in its draft form) exactly zero have an equilibrium climate sensitivity that is as low as the mean value of estimates from the recent literature included in our Figure.

Based on the collection of results illustrated in our Figure, the future climate change projections about to be issued by the IPCC are off by an average of a whopping 70 percent.

No wonder the IPCC is reluctant to lower their best estimate of the actual value of the earth’s equilibrium climate sensitivity. If they did, they would be admitting that the collection of climate models they have chosen (there is choice involved here) to project the earth’s future climate are, well, how should we put this, wrong!...which would mean that so too is the rate at which the sky is falling, according to the USGCRP and the US EPA.

We, at Cato’s Center for the Study of Science, will continue our efforts to portray the evolving state of climate science and to convince the powers-that-be that national and international assessments upon which EPA regulations are founded (and loony proposals for a carbon tax are based) are fatally flawed. Or as we put it, in our recent (April 12) review of the USGCRP’s draft “National Assessment,” in its current form, “the NCA [National Climate Assessment] will be obsolete on the day of its official release.”

Annan, J.D., and J.C Hargreaves, 2011. On the genera­tion and interpretation of probabilistic estimates of climate sensitivity. Climatic Change, 104, 324-436.

Lindzen, R.S., and Y-S. Choi, 2011. On the observational determination of climate sensitivity and its implica­tions. Asia-Pacific Journal of Atmospheric Science,47, 377-390.