As the earth’s climate sensitivity is perhaps the key factor in what climate lies ahead, we’ll often report on scientific findings that enhance our understanding of this important parameter.

Recall from our previous discussion, that the earth’s “climate sensitivity” is the amount that the average global surface temperature will rise, given a doubling of the concentration of atmospheric carbon dioxide (CO2) from its pre-industrial value. This metric is the key to understanding how much global warming will occur as we continue to burn fossil fuels for energy and emit the resultant CO2 into the atmosphere.

New findings seem to be coming in with some regularity since the publication of the AR4 that the IPCC’s estimate is on the high side of reality.  We discussed some of these findings in our publication Addendum: Global Climate Change Impacts in the United States (p.26-27) and more recent ones in a Global Science Report last month.

Now we have another new, lower estimate, to report on.

Just published in the journal Geophysical Research Letters is a paper by Julia Hargreaves, James Annan and two Japanese colleagues titled “Can the Last Glacial Maximum [LGM] constrain climate sensitivity?”  While Hargreaves et al. don’t really answer that question directly, they use a new determination of the cooling during the Last Glacial Maximum to derive estimates of the climate sensitivity (although their estimates come replete with caveats). So, they must think they are on to something.

Their estimates are derived using two different statistical techniques, one employing regression relationships between tropical temperatures during the LGM and climate model climate sensitivity, and another using a Bayesian approach weighting each climate model based on how well it matches the new LGM data.  The two methods produced very similar results, with a mean equilibrium climate sensitivity of about 2.5°C with a 90% confidence range of about 1°C to 4°C.  This result is more tightly constrained than the IPCC estimate and also shifted a bit towards lower values.

One of the caveats from the Hargreaves et al. is that the climate models whose results they tried to match with the LGM conditions did not include the influence of atmospheric dust and vegetation changes, influences which the authors note “while these are poorly constrained, they are likely to be net cooling influences.”

They made a “rather simplistic” attempt to approximate the influence of atmospheric dust and found that it dropped their sensitivity estimates even further, to about 2°C, with the low end of the 90% confidence range falling below 1.0°C.  Recall that in the AR4, the IPCC stated that it was “very unlikely” that the equilibrium climate sensitivity was below 1.5°C.  In IPCC parlance, “very unlikely” means with less than a 10% chance of occurrence. We would venture to say that Hargreaves, Annan and colleagues found a substantially greater chance that the true climate sensitivity lies below 1.5°C.

While this will almost surely not be the last we hear from these authors on this matter as they indicate that there is still plenty of work to be done using newer climate models and improved climate forcing and paleo-temperature estimates, it is definitely an interesting initial effort/result. 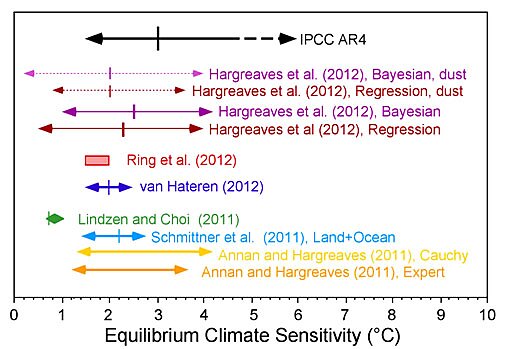 Figure 1. Climate sensitivity estimates from new research published since 2010 (colored), compared with the range given in the IPCC Fourth Assessment Report (black). The arrows indicate the 5 to 95% confidence bounds for each estimate along with the mean (vertical line) where available. Ring et al. (2012) present four estimates of the climate sensitivity and the red box encompasses those estimates. The right-hand side of the IPCC range is dotted to indicate that the IPCC does not actually state the value for the upper 95% confidence bound of their estimate. The thick black line represents the IPCC’s “likely” range.

Over time, our guess is that this chart will continue to expand with the addition of new studies.