North Carolina is becoming the latest hot spot in the education funding wildfire—thousands of protesting teachers are expected in Raleigh on Wednesday—so before I deliver the promised wrap up on my state spending series, I thought I’d add NC to the mix.


As you can see on the following chart, North Carolina’s total spending per‐​pupil, which includes both operational and capital costs, fell appreciably between the 1999–00 school year, the earliest with readily available federal data, and 14–15. It dropped from inflation‐​adjusted $10,397 to $8,986, a roughly 14 percent decline. Like other states already profiled, spending peaked right before the recession, but unlike hot‐​spot states Colorado, Oklahoma, and West Virginia, it never recovered to eventually exceed the beginning of the period. It basically kept dropping until the last year in the period. 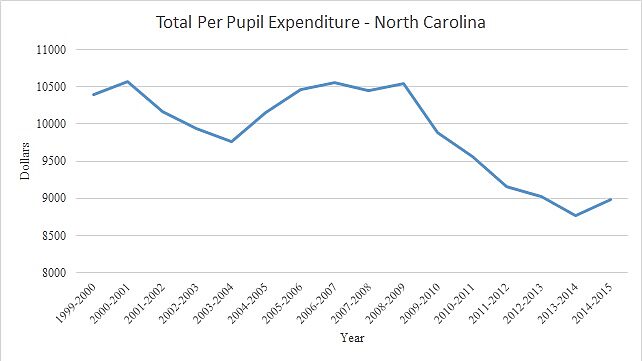 Where have the biggest changes been? Breaking the spending down in the chart below, the state has generally kept instructional spending pretty steady, ending only 3 percent lower in 14–15 than 99–00. The big drops were in capital outlays and interest on school debt. The latter disappeared almost entirely, and the former dropped 71 percent, from $1,549 to $448. Like other hot‐​spot states, North Carolina saw increases in various support categories, with the biggest percentage increase in “other support,” which grew 50 percent. 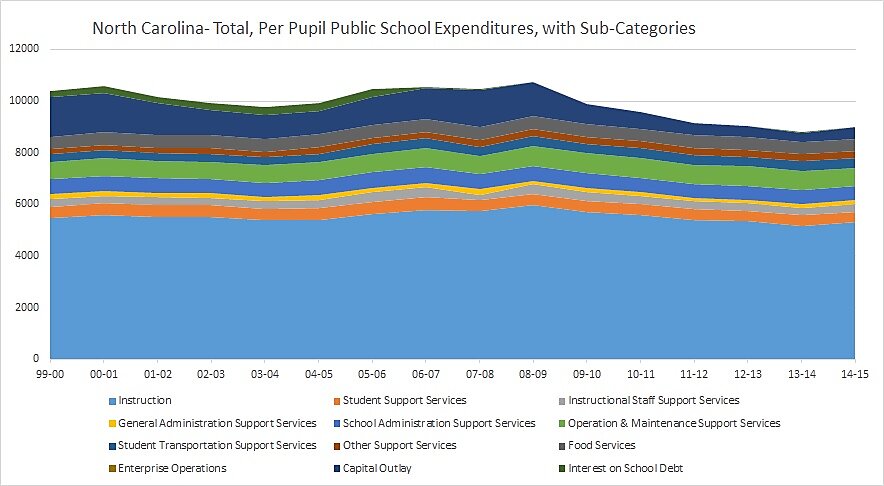 So there’s your North Carolina snapshot. Coming next: Our final installment looking at some of the possible reasons for these changes.